After last weekend’s reality check, I figured I’d be better off riding with the B riders in our club. Just a reminder — we consider A’s to be able to ride decent distances at a fast pace. B’s are slower, and don’t go as far. I know many other clubs break down riders into more classifications than we do.

Anyhow, since our B’s haven’t been very active lately, I guessed that if we were going to have a B ride, I would have to organize it. But whadya know, another guy beat me to it.

The A’s had an ambitious and difficult route planned for today. The B organizer picked a route that would follow them for a ways, then head back to our starting spot. We’d be in for some hills, but the ride itself would be relatively short. 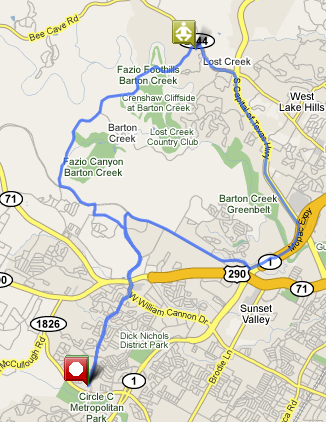 The route on Map My Ride. The tough hill is at the top of the twisty part at the upper left.

Ride elevation. The hill most of us had to walk is at the 10-mile point.

The morning was perfect. Sunny, warm but not hot, not much wind. We set off with the A riders, so about 17 of us cut a fine figure pedaling through the neighborhood. We turned onto Barton Creek Blvd., which winds through a swanky neighborhood by a nationally-famous golf resort. I hadn’t ridden this road before, and I knew it was hilly. But the hills weren’t too much of a problem, until the last one before reaching Ranch Road 2244. That forced most of us to get off and walk. 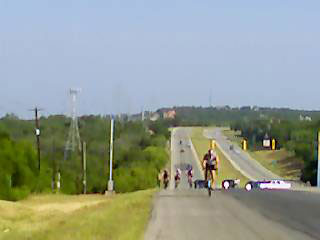 At 2244, the A riders turned west, and we turned east for the ride home. The rest of the route was on shoulders of sometimes busy highways. Plenty of hills through here as well, as seen by this cell phone camera shot along Loop 360, but these were not difficult.

We got back to our Starbucks starting point for some FrappaMochaCappucinoLattes, or whatever, and some chit chat. Ride time: about 23 miles in 1 hour 43 minutes, avg speed: 14.7 mph. None of us could have kept up with the A group, and none of us cared. It was the kind of ride I’ve been looking for since joining the club. I’m looking forward to many more of the same, now that the B’s seem to be up and running again.