The most interesting comment to come in after the “Most Common Noob Mistakes” post was one by Dr. Richard Keatinge, a general practitioner from Wales, in the United Kingdom. Although failing to wear a helmet was fourth on our little informal list, Dr. Keatinge says helmets don’t do the job they’re supposed to do. He is a member of the editorial board of the Bicycle Helmet Research Foundation, an organization whose purpose is “to undertake, encourage, and spread the scientific study of the use of bicycle helmets, in the context of risk compensation and sustainable transport.” It appears to be a largely European group. I’ll let Dr. Keatinge take it from here, then add some thoughts of my own. 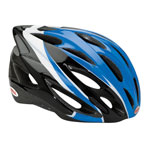 The trouble with bike helmets is that the figures don’t show that they work – helmet laws have stopped a lot of people cycling and have done nothing for head injury rates, see Robinson DL. No clear evidence from countries that have enforced the wearing of helmets. BMJ 2006;332: 722-5. http://www.bmj.com/cgi/content/full/332/7543/722-a. (Robinson’s work is the best scientifically because she uses the best scientific methods, all available control groups and so on.) It appears that helmets break easily, but don’t absorb the impact, see the engineers quoted at http://en.wikipedia.org/wiki/Bicycle_helmet. A broken helmet has simply failed, and the widespread anecdotes on the theme of “a helmet saved my life” seem to owe more to wishful thinking than to science. As for “a car ran over my head”, see the pro-helmet site http://www.helmets.org/smush.htm; if a car goes over your head, I’m sorry to say you won’t be sitting up and praising your helmet. The only known connection is that helmets have strangled a few young children who were wearing helmets while playing off their bicycles.

I no longer wear a helmet and haven’t pressed them on my children. I do check that their brakes work, their saddles are the right height, their lights are bright at night, and that they have a good idea of the rules of the road.

At my moderately advanced age it’s far too dangerous not to cycle – regular cycling, Danish style, not too far, not too fast, nearly halves the death rate, see http://archinte.ama-assn.org/cgi/content/abstract/160/11/1621 All-Cause Mortality Associated With Physical Activity During Leisure Time, Work, Sports, and Cycling to Work. Andersen et al, Arch Intern Med. 2000;160:1621-1628. Bicycling is good for health, but helmets don’t seem to be.

Dr. Keatinge makes an interesting case, and supports his claims with scientific evidence. I’ve seen arguments like this in the past. Even the Bicycle Helmet Safety Institute agrees that there are conflicting results to scientific studies on bicycle helmet effectiveness.

The “smush” test Dr. Keatinge links to is hyperbole; no one claims that a helmet will keep your head from being crushed if a car rolls over it. What a helmet is supposed to do, according to the Consumer Product Safety Commission, is “reduce force to the rider’s head when the helmet hits a hard surface.”

The CPSC standard is the one in use in the United States. Testers put a helmet on a headform and drop it a distance of two meters onto an anvil. That’s about the distance a bike rider would fall from a seated position on a bike, and a speed of about 14 miles per hour. A helmet must register less than 300 g’s to pass.

Let’s say you’re traveling at more than 14 mph, as blogger GT in LA was last week. He touched the wheel of the bike ahead of him, and went down hard. His bike slowed instantly, and his head’s speed when he hit the ground was probably less than 20 mph, and maybe less than 14 mph.

Although GT was banged up pretty badly, he had no head injuries. Take a look at the damage his helmet sustained. GT’s experience is anecdotal evidence, and not part of a scientific study, so I’ll cite this one: the Thompson, Rivara, and Thompson article in the New England Journal of Medicine from 1989 that showed riders wearing helmets had an 85 percent reduction in risk of head injury, and an 88 percent reduction in risk of brain injury (Dr. Keatinge’s organization takes issue with these findings).

I’ve fallen three times in the last nine months. No serious injuries, but all three crashes were my fault. That’s a pretty good indicator that I’m likely to fall again. A helmet won’t save me from my own stupidity, carelessness, or inattention while riding, but it will improve the odds that my noggin won’t be damaged if I do go down.

Riding “not too far, not too fast” might be good for overall health, but we’re bike riders, and I for one am going to strap on my $35 CPSC-certified helmet and keep riding.