Jeff Hemmel was lucky enough to go on a ride recently with Tour de France commentator Bob Roll.  While we’re all in Tour mode, I thought it would be apropos (Mon Dieu, Noob!) if he told us all about it.

So anyway, the other day I was out for a ride with Bob Roll when…

Sorry. I’ll pause while you get out the broom. After all, that’s a pretty big name I just dropped. But come on, how often do you get a chance to say something like that? This is Bob Roll I’m talking about, legendary American cycling great, a guy I’ve watched on the Tour-DAY-France coverage for years, a guy who…well…who…who actually knows Lance! And not just knows him, but who actually was there when Armstrong was up in those mountains of Boone, NC pondering giving up the sport of bicycle racing, before Armstrong won all those Tour-DAY-France victories and before completely random people started wearing yellow bracelets with his message sunk into the rubber. The Bobke has played a key role in cycling history. He’s connected, an actual cycling celebrity, a charismatic, balding guy in tights.

And yeah, I was riding with him. Just my normal morning ride. Hanging out with the usual crowd.

Well okay, it wasn’t really that normal. And Bob and I aren’t really that tight. In fact, I’m not even sure I made much of an impression on him. But it was fun nonetheless, if only for the photos I sent out later to friends and family who suddenly wondered how it was I was standing with the Bobke’s arm around my shoulder, both of us clearly sweaty from the epic training ride we had just gone on together, the one where he had probably challenged me to a sprint finish and now we were just hanging out, having a few laughs, probably arguing about who was going to pick up the lunch tab, the Bobke or the Jeffke.

Yeah, that part was fun.

So how did I get this chance? One of my friends and riding buddies, Chris Lauber, saw it in the paper. (Chris is actually a pretty good story himself. Last year he turned 50, and rode 50 centuries in one year, losing a massive amount of weight in the process and whipping himself into shape. But this story is not about the Lauberke, it’s about the Bobke, so sorry Chris, your time is up.) As it turns out, an area bike shop was having a grand opening and Bob was the unlikely guest of honor. He was scheduled to do the classic meet-and-greet one evening, but for those who have jobs they can escape from on a weekday, Roll would also be doing a couple-hour ride in the morning. Who could resist?

I sense an epic coming on, so I’ll try to speed things up. We met up at the shop, posed for the group photo, and took off, a group of about 40 heading out on some pretty quiet roads south of Tampa. Chris and I both live on the beachy side of the bay and didn’t recognize any faces, so we started at the back of the pack, figuring we’d ride a nice paceline and eventually move our way up to Bob, who we assumed was somewhere at the front. I actually never saw him before we left, but I knew he was up there waiting to swap some great stories and grin that goofy grin with each and every one of us.

Or maybe not. By about 10 miles in, I still hadn’t seen the guy. A few more and I was beginning to wonder if he was even up there. Then I started to wonder if he was in fact there, but swapping those funny stories and grinning that goofy grin at some other random dude-kes instead of us. Obviously we had to take matters into our own hands, so we picked up the pace and started to move forward. We passed the guy in the vintage 7-11 kit. (Damn, why hadn’t I thought of that angle!) Elbowed our way past the guy in the Astana kit. (Dude, you work at the shop…you’ve probably already gotten the chance to talk to him for, like, an hour!) And finally, finally, we were riding right alongside Bob Roll. It would be the ultimate picture. I reached for the camera in my jersey pocket…and froze. On the one hand, this was a once-in-a-lifetime opportunity. I had to do it. Then a headline flashed before my eyes: “Bike Noob Takes Out Legendary Cyclist While Trying To Snap Souvenir Photo In Crowded Pack Of Riders All Trying To Convince Their Friends They Know Bob Roll.”  Slowly I slid the camera back into my pocket.

Besides, my buddy Chris had taken the inside line and now he was the one swapping stories. And well, they were better than mine. Chris (so close to Bob they were practically sweating on each other in the June heat): “Hey Bob, I’m a former big-time professional photographer, and I shot photos of you back in the 7-11 days when you came through Boston.” Me (desperately trying to lean around Chris and sweating on, well, nobody who mattered): “Bob, Bob, I…I…I spent Christmas near Boone last year!”

Before I knew it, the moment had passed, and I dropped back, letting someone else have their shot at that sprint finish, those laughs, that argued-over lunch tab. Sure, I had a second chance back at the shop, and yeah, it lasted a little longer this time around. Bob and I actually talked briefly about Boone, the Florida heat and humidity (I don’t think he’s a fan), and he autographed a couple Tour podium hats.

Then I thrust my camera in Chris’s hand and said, “Quick, get a picture!” 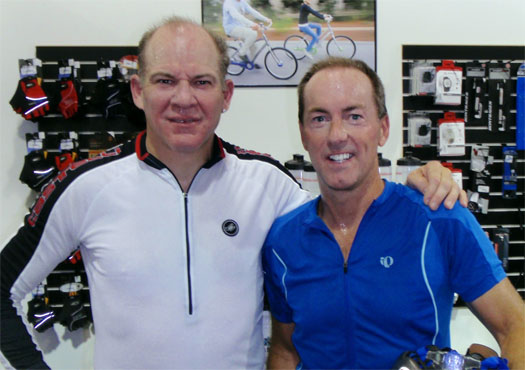 Later I realized that the Bobke had actually put his arm around my shoulders, grinned that goofy grin, maybe even sweated a little on me.

I never did see him for lunch, though. Maybe he misunderstood the name of the restaurant…