I bonked today. But so did four of the six who started our Sunday morning “B” ride.

It started out routinely enough. We were going to do a well-known biking route, the “Tour de Austin.” As the name implies, it’s a ride through the city, hitting local landmarks like Lake Austin, the University of Texas campus, the Texas State Capitol, and some funky neighborhoods. Because our club’s membership comes from extreme southwest Austin, we don’t do the ride much. In fact, today was my first time.

Because of that, I arranged for my friend David to lead the ride today. He figured it would run about 40 miles, after he cut off a large loop at the north end of the route. We started promptly at 8:15 a.m., and enjoyed an almost traffic-free ride down one of the main arterial roads that leads out of our area.

One of the great things about biking is that you see things you would never see from a car. I’ve lived in this city for nine years, but we rode through neighborhoods I’d never seen before. We came out at Austin’s big riverfront park, Zilker Park, and crossed the Colorado River (Lake Austin) on a pedestrian bridge (it’s okay — bikers use this, too). Then, we rode along the river through some swanky neighborhoods, until we reached the base of Mt. Bonnell.

It’s not really a mountain, just a high promontory overlooking the river. David and Penny decided to take an alternate route. We remaining four headed up the 16-20 percent grade. Granny gear all the way, but we got to the top.  A bit past the summit, we had our choice of directions — left or right. We had to meet David and Penny at a coffee shop in the area. Even though I had never done this ride before, I suggested we go left.

A twisty 16 percent downhill run took us out to Rt. 2222. One look at the speeding traffic and lack of a bike lane convinced us we’d (I’d) made the wrong choice. Back we went — this time up the hill. One of us rode all the way up. Three of us walked. 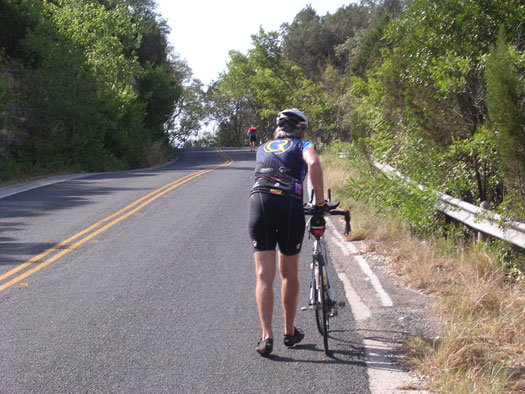 It turned out we were only a few blocks from the coffee shop, and our downhill-uphill excursion never had to happen. The day was heating up, too. We reached the coffee shop and took a half hour to cool down and fill ourselves with liquids and food before starting out again.

Now we were on relatively flat streets heading for the UT campus. I felt some of my strength coming back, but it wasn’t all there yet. I tried not to think about it, but enjoyed the sights. 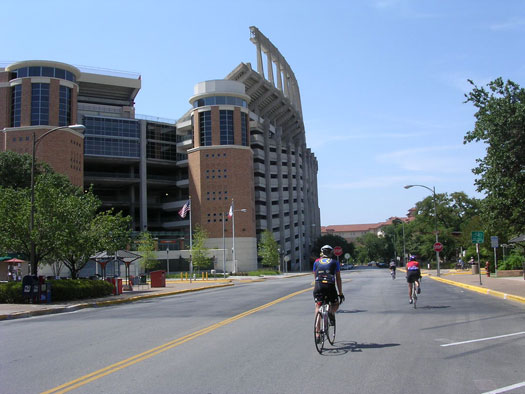 Darrell K. Royal Memorial Stadium at the University of Texas. 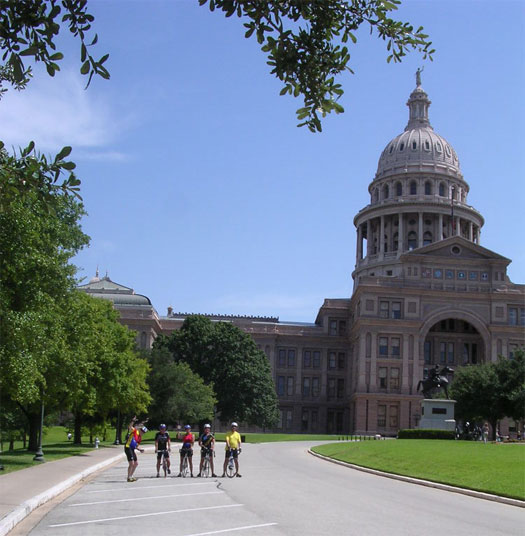 Lined up (sort of) at the Texas State Capitol.

Once we left downtown and re-crossed the river, it was uphill again. Not brutally steep, like Mt. Bonnell, but gradual and long. I was falling behind the group. By this time, the temperature was around 95°F (35°C), and we were all starting to feel it. We refilled our water bottles at a drive-in restaurant, and slogged on.

But it was no good. David slowed to come back to me and ask if I was doing all right. “I need a stop,” I said. We pulled up in a shady spot. Penny was done in, too. I called my wife to come pick us up. We rode another quarter-mile to a major intersection, where Penny and I peeled off from the group, and waited for the ride home.

Later, I found the rest of the group didn’t do well, either. One strong rider had to get back, and took off on his own. On a steep hill three miles from the finish, David cramped up badly and had to stop. A local homeowner, who gave her name as Laurie, saw he was in distress and brought wet towels and lots of water to help. David has now named the hill the Col de Ste. Laurie.

Everyone eventually got back, after a 40-mile trip that turned out to be closer to 50 for the Mt. Bonnell climbers. Clearly, we bit off more than we could chew today. The combination of hills and heat simply wore us down (As I write this at 8 p.m. local time, the temperature is still 100°F (38°C)). We think we’ve gotten used to the heat, but it keeps biting us. I think when this record-setting summer finally turns to fall, we’ll do a lot better.