You bet they have. 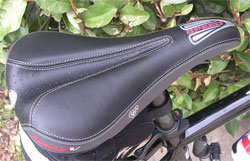 First, the seat. It’s a WTB Speed V. I’ve already posted on this. I still like it, and since I’ve had it for more than a month without any complaints, I guess I can keep it permanently. I wish I’d gone this route a long time ago.

The handlebars. I got a pair of 44 cm bars, although the bike fitter recommended 46  But he said I could get by with a minimum width of 44 centimeters. I picked up a used pair at a good price. Even though they’re only 2 cm wider than the old bars, I can feel the difference.

There’s a less constricted feeling in the chest, resulting in a more comfortable riding position. The new bar is a smaller diameter than the bar it replaced, but that’s only really noticeable when I grab the top during climbs.  Not a big deal. 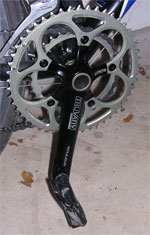 The crankset. I replaced the Shimano Tiagra crankset that came with the bike with a Truvativ Rouleur.  The new cranks are shorter — 172.5 mm instead of 175s.  This is the change I was most interested in, because I was told it would make climbing easier. I suppose it has, although as noted here a few days ago, I’m working more on hills than I have in the past, so I’m getting stronger legs anyway.  However, what I have noticed is that it makes turning the pedals easier. I get moving faster, and I run at a somewhat higher cadence than I had been. In other words, they’re easier to ride than the old cranks, and I am pleasantly surprised at the change.

So, as Don Blount reported last month, upgrading the bike results in a better ride. If you know what you need and have some spare cash lying around, you can coax more performance from your bike without having to spend big bucks for a whole new one.