I’ve now been biking “seriously” since the summer of ’07, and recently, I got to thinking about what types of riding I enjoy most.

I do a lot of different kinds of rides, but all my riding is on the road.  Although I own a mountain bike, it is strictly an errand bike, and I do not take it out on recreational rides.  On the road bike though, I do the occasional short time trial, trying to hold my top speed for eight miles; I go to the local Veloway and do anywhere from six to 18 miles, sometimes lazily, sometimes with intervals or fartlek, often in just the small chainring to work on cadence; I ride with my club on Sunday mornings, sometimes struggling to keep up with the peloton, sometimes leading a slower B group ride; I ride a collection of routes from the house of varying length, sometimes sticking to my suburban-style neighborhood, sometimes venturing out into the country.

I imagine it’s much the same for most of you.

But if you had your choice, what kind of riding would you prefer over the others?

I have come to the conclusion that my cycling style is easy long distance.  I like to ride country roads with light traffic.  I like to ride without feeling any external or self-imposed pressure to finish by a certain time.  I like to be able to stop, and perhaps take pictures every so often. 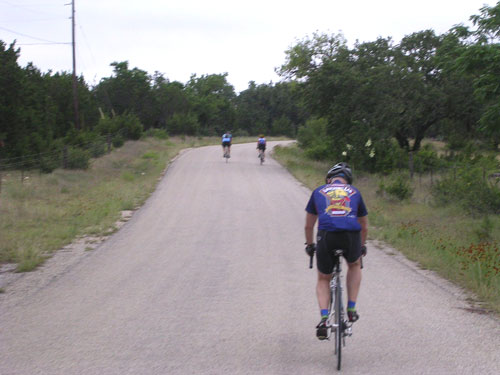 My idea of bicycling heaven.

Living where I do, that kind of riding is fairly close by.  I have a couple of routes that will put me on roads like those within six to 10 miles.  Or, I can toss the bike in the car and drive a little farther to get to even less traveled roads.

Now, that’s not to say that I have now begun to ignore other types of riding.  For one thing, I know I have to do some speed work just to be able to enjoy the riding I prefer.  It’s no fun to be 35 miles into a ride and feel tuckered out.  I do the occasional hill work, so I can handle the hills I run into out in the country.

But I’m not at all crazy about the kind of riding a lot of my acquaintances take for granted: long jaunts on the shoulder of a high-speed highway.  The popular “Dam Loop” west of Austin is a magnet for many area riders.  I find it to be most unpleasant, and having ridden it a few times now, I will avoid it from here on out.  (That’s not to say I won’t do it again sometime — I just don’t like it all that much.)

I would guess that the riding I prefer actually accounts for less mileage than the other riding I do.  But that’s okay — it becomes something to look forward to.  I’ll toil on the hills and during intervals, I’ll put in the miles on suburban residential streets, and I’ll ride the shoulders of fast roads — as long as I can get that 35-60 mile weekend ride in, away from heavy traffic, enjoying the scenery, the animals, and the company of like-minded bikers.

I’ll bet some of you have your own idea of the perfect ride.  Come on, weigh in.