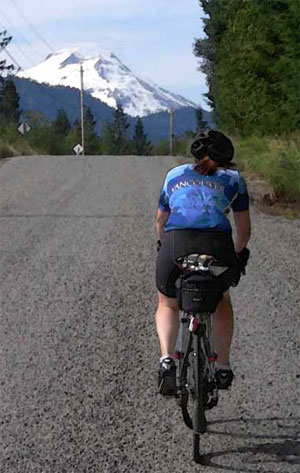 I’ve been mulling over my riding plans for this year. You might recall that I mentioned in an earlier post that I hoped to do more organized rides than I did in previous years. But I’ve reassessed that idea.

Organized rides are a lot of fun. You get to see other bikers and look over their equipment, size up their riding abilities, and put down lots of miles in the company of people with whom you share at least one interest. You plunk down your $30, or $35, or $40, and in return you get a route that’s been scouted out, sag support during the ride, and rest stops manned by usually helpful volunteers. There’s also a goodie bag that might have a water bottle, an energy bar, a discount coupon or two for biking supplies, and other tchotschkes.

But the other evening, I was enjoying a ride with my friend David, and talk turned to those rides. “Yeah, you pay 35 bucks for a t-shirt,” he said.

David has done his share of those rides over the years, but is no longer interested in them. He noted that in most cases, the rides run over routes that can be ridden for free if the rider is willing to forgo the kind of support the organized rides provide.

Now, I know that most of these rides are sponsored by worthy charities. In fact, that used to be one of my criteria for taking part. But I’ve been rethinking that aspect, too. For the past several years, my wife and I have picked a small number of charities to support — only two to three — and that’s where we send our money. I’d like to think that I’m not entirely selfish.

In my area, the biggest riding group around, the Austin Cycling Association, does informal rides on Saturday and Sunday mornings. You show up, get a map, get some brief instruction from the ride starter, and then you’re pretty much on your own. Even if the rides don’t exactly mirror some of the better-known organized rides, they do cover a lot of the same ground.

Or, you could just sit down with a map and plan out an excursion on your own.

Last night, I started doing just that. Nothing definite yet, although I do have several ideas in mind. I think I’ll start riding places I haven’t been to yet, even if they look like a lot of places I have been to, just so I can break new ground. I had already made up my mind to skip the MS 150 this year (although that’s one I’ll probably do again in the future), and I think I’ll drop my plans to take part in some other rides.

The weird thing about this is, I’m surprised it’s taken me so long to come to this conclusion. I follow lots of biking blogs, and it seems that most of their authors just hop on their bikes and go. But I, on the other hand, have had a pretty well set repertoire of routes, and I need to expand on that.

So, one of these days I’ll put the bike on the car rack and head out to the Pedal Thru the Pines route. I’ve been meaning to do that ride for three years, and haven’t yet. But I’ve got the route map, and I’ll go without the crowds. Ditto the Real Ale Ride in Blanco, Texas. And the Wurst Ride in New Braunfels (which I’ve actually done once, but it’s been awhile, and I’d like to tackle it alone). I’m looking forward to the rest of this year, and all the new places to go and things to see.