For the last few days, I’ve been kinda down about cycling. Some minor equipment malfunctions, some nagging aches, and less time in the saddle because of the requirements of the job have combined to push cycling out of the foreground of my consciousness. But then I come across an article that convinces me to get out there and ride — and keep riding.

You’ve heard of Senior Olympics. It turns out those games have cycling events. It never occurred to me that that might be a possibility. All you have to do for inspiration is scan the results columns or find some pictures. 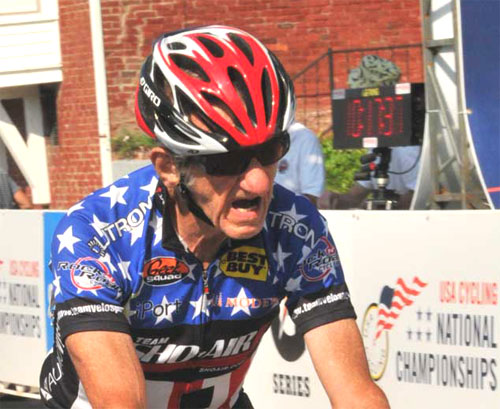 For example, I discovered Link Lindquist when I came across the results for the USA Cycling Road National Championships held early this month in Bend, Oregon. Link took third in the Individual Time Trial, over an 18-kilometer course. But he didn’t stop there. He was also the oldest competitor in the criterium portion of the championships, where he also placed third. Link is 84. 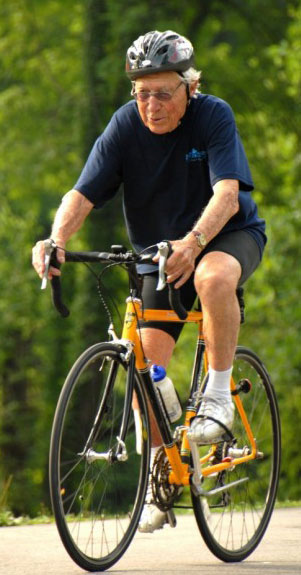 That’s pretty impressive. But he still has some catching up to do. Dave Ward of Massachusetts was still competing — and winning his age class — at the age of 91. Here he is (right) at that age in the 2007 Senior Olympics.

What? You’re not up for racing now, you say, and you’re certainly not going to be up for it when you’re in your 90s. I can relate. That’s pretty much my attitude right now. I like to go for longish relaxed rides, where I’m not worried about putting the miles behind me. If I can explore new areas while doing so, so much the better.

Well, there are a number of bicycle touring companies that offer tours for seniors. In the case of bikers, that means anyone over 50 years old. The tours are well supported, and in many cases offer posh accommodations. But plenty of people opt to head out on their own.

Bike clubs are certainly an option. I’m in a club with several 60-plus riders, and we all generally do pretty well. We’re not going to keep with with the A group — uh, come to think of it, several of those 60-plus riders are in the A group!

In fact, you might find your club’s ride leader is in the senior-senior category. The Sacramento (Calif.) Wheelmen’s Tuesday and Thursday morning rides are led by Tom Goodwin. He’s 83. According to his fellow riders, he can still kick butt on younger riders in the hills.

I might not kick butt when I’m 83. I might not even go on group rides anymore. But you can bet I’ll still be riding a bike when I’m that age.

Heck, I think I just came out of my funk. I’ve gotta get out there this weekend and attack some hills. And ride far. And just ride.