Although our club ride is on Sunday morning, a group of members called a Saturday ride this week. They planned to meet at 9 a.m. and take a moderately paced ride (14-16 mph) to a town south of here, then double back, for about 45 miles. That would be a good pace for me, and not as fast as the A group rides on Sundays, so I went to bed Friday night planning to join them.

But after answering the dog’s bark to be let out three times before 6 a.m., I finally relented, and let her into bed with us. That calmed her down, and she was soon fast asleep. As was I. So much so, that when Pat shook me awake, it was already 8:30. No way I would be ready to ride with the gang this morning.

We puttered around the house, lazily drinking coffee and eating a light breakfast while reading the paper (and for me, some websites). Then Pat said, “I need to take a bike ride.”

This was unusual for her. She’s not a fan of the cold, and he temperature was 43 degrees (6C). But the wind appeared to be relatively light. We got into our cold weather cycling gear and made ready to hit the streets. 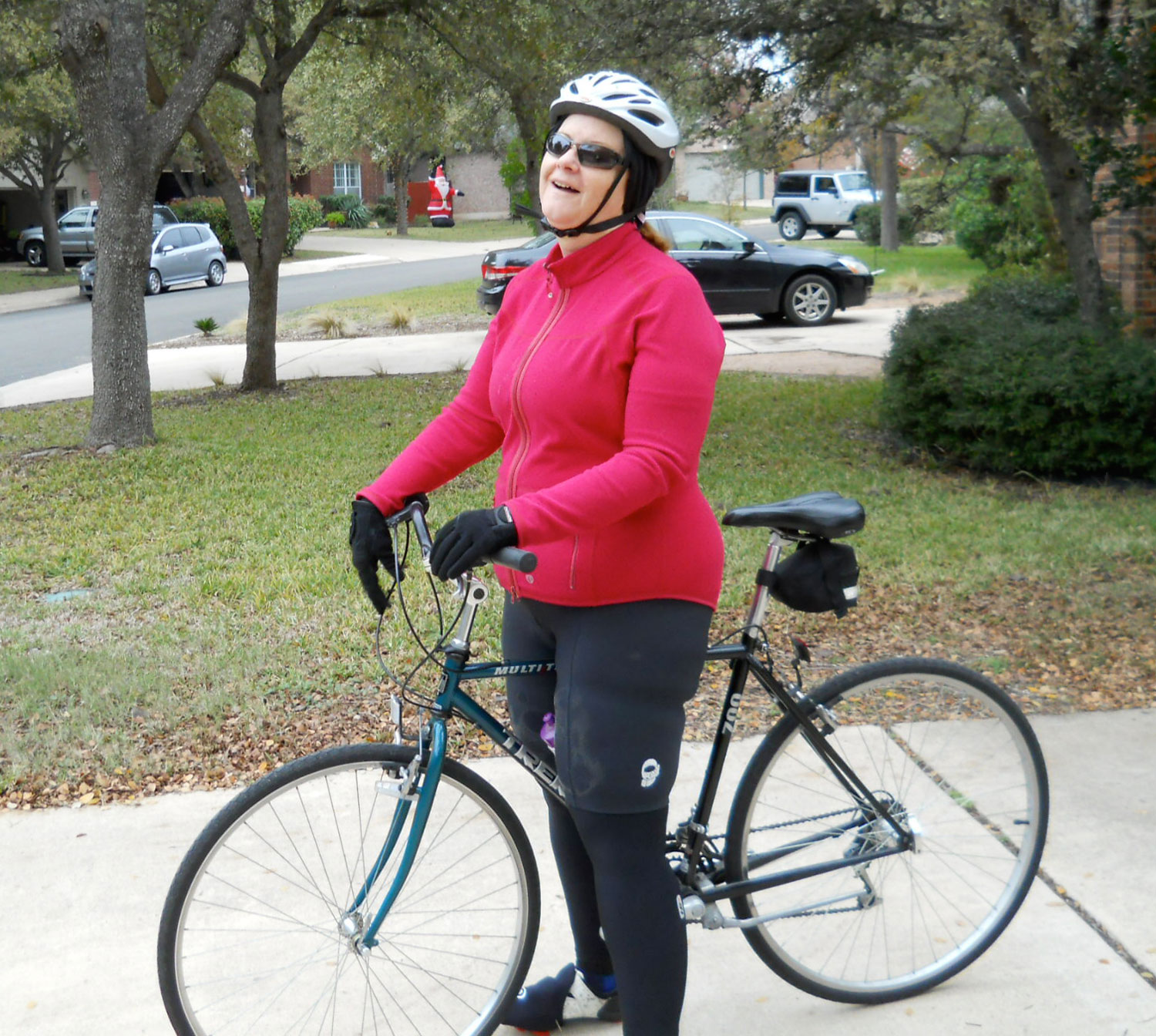 “Let’s head out to Mopac,” she answered. That surprised me, too. It’s pretty wide open along that road, and even though the wind was light at our house, I knew it would blow along the highway. But going that way would also give me a chance to get in my usual Saturday morning ride.

More often than not, I take the same route on Saturday mornings. It’s a route that keeps me close to home, but features a variety of different riding conditions: the shoulder along Mopac, the Veloway, and a run up to Convict Hill, which lets me do a little climbing. We set out.

Once we got to Mopac (short for Missouri Pacific Railroad, which used to run near this route), the going was easy. I realized the wind was out there as usual, but this time, it was coming from the north — at our backs. Even making the right-angle turn to the west kept the wind behind us. I guess it was more a northeast wind today.

I always wait at the top of Escarpment Hill for Pat to catch up to me. Her heavy steel hybrid is not an agile climber, but it always gets to the top. We set out again, and did our usual stop for Pat to rest a bit and grab some water when we hit the turnaround at Ranch Road 1826.

Going back, the wind was in our faces. On the downside of Escarpment Hill, my bike computer barely registered 25 mph. I’ve been as fast as 35 down this hill, and commonly do it at about 32. The wind was showing its stuff.

I waited for Pat again, and asked if she wanted to add a Veloway loop to the ride. Access to the bike track was at the next intersection, but she opted to head home. It wold be a good ride for her, of just over 13 miles. I told her I would continue on.

My route now took me farther north, toward Convict Hill. I ride a two-lane road to get there, and am able to stay in a bike lane most of the way. This morning, I was a bit creeped out, though. When I stopped to make an adjustment to my equipment — my seatpost-mounted water bottle cages had started to come loose — a black Escalade turned onto the street in front of me, then turned into the driveway of the first house. Instead of getting out and going inside, the couple sat in their vehicle with their engine running, watching me. When I took out my camera to snap a picture of the road, they must have really wondered what manner of  commie spy this guy on a bike was. After all, the temperature hadn’t warmed up much since we left our house — and normal people don’t do outdoors things in weather like this. I put my camera away, deliberately took a long, slow drink from my water bottle, and then pushed off. I still don’t know if they went inside — this was not an Escalade neighborhood — or if they continued on their way.

I headed for Convict Hill, a nice uphill for about a half mile, and worked my way through the neighborhood at the top. After negotiating several smaller hills, I got to charge down into the wind — so I was only able to hit 29 mph.

Because I hadn’t done a Veloway loop, I decided to add a few more miles by going farther east — back through the area where the Escalade had watched me. No Escalade this time, and I made it home without any further incidents. Total distance: 27.3 miles. Average speed: 14.4.

This is my usual Saturday morning ride, although if Pat isn’t along, I start on Convict Hill, then do Mopac, and finish up with a Veloway lap. The distance is the same either way.

Oh, and the club’s Saturday morning “easy” ride? They wound up getting caught in a small town parade along the way, became separated from each other, and so raced the rest of the way. They averaged 18 mph for 50 miles, into a headwind for the second half of their trip.