When I posted about my new Penn State jersey last week, I mentioned that I had run into our club ride that was departing in the afternoon after a postponement because of morning rains. I noted that most of the riders were wearing their club kit.

“People who regularly go on club rides usually wear club kit?” one commenter wrote. “Huh. Would never have occurred to me to do something like that.”

Well, I don’t know about your club, but we like the look of our club jerseys. Up until last year, a new version came out every year. The picture below shows our current look. 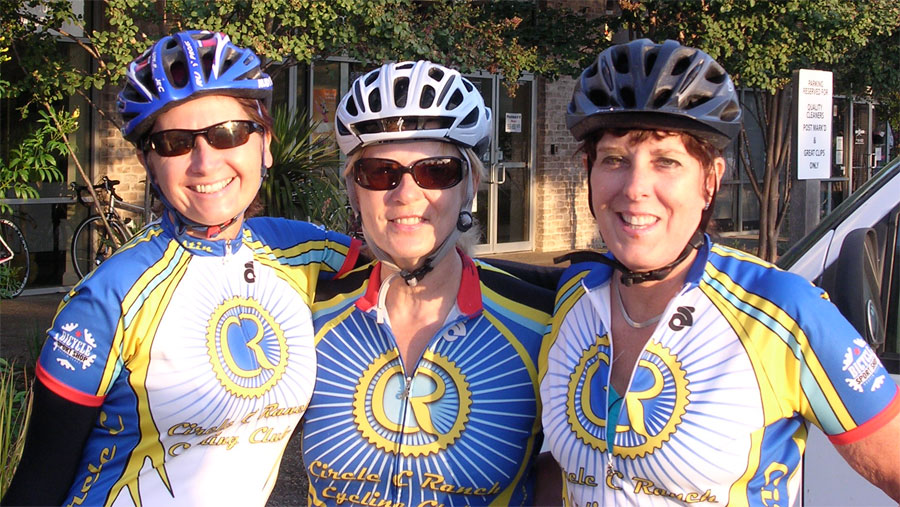 The name of my club is the Circle C Ranch Cycling Club (CCRCC), after the name of the neighborhood in which most of us live. The white version of our club kit came out in 2011, and we haven’t created a new one for the current year. The blue one in the middle is the 2010 version. I’m also in the 2010 version in the banner at the top of this page. 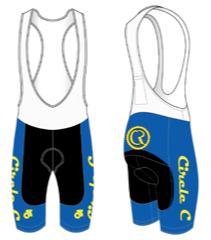 The CR emblem is the logo used by the Circle C Ranch subdivision — a “circle” with the letters C and R (for Ranch). We’ve had the circle changed into a sprocket ring. We’re cyclists, after all! This picture was taken on a warm summer day, but club members can also get a load of accessories, all color-coordinated, such as shorts, tights, arm warmers, wind vests, thermal jackets, and cycling caps. Lots of our members have all these and more.

In addition, on many rides you’ll find people in older versions of our kit. After all, the jerseys don’t wear out that quickly, so they’re still wearable.

Other clubs in the Austin area have their own kit as well, such as Lake Travis Cycling, the Austin Cycling Association, Tough Cookies, Austin Flyers, and more. They’re all well represented at area group rides.

So I was wondering, in light of the comment above, do you cycle with a club that has its own kit? Do you wear it on club rides? And if so, what does it look like? I’d love it if you sent me some pictures of your own club’s designs — preferably being worn at a local event. In future weeks, I’ll revisit this topic with some more samples of what folks are wearing out on their rides. Send pictures to rainycamp AT Yahoo DOT com.

“Yesterday, I stopped at the new bike shop for some lube,” I said as I passed my wife while out on a morning ride. “They’ve got some saddles in there you should check out.”

Wow, that’s a turnaround. Just last week she was complaining that her saddle was so uncomfortable that she wanted to get a new one. Why the sudden change of heart?

Well, after she complained last week, I took a look at the saddle. It’s the original Trek gel that came with the bike when we bought it in 1992. But it hadn’t been on the bike for some years — not until I put it back on after the saddle she’d been riding failed on a New Year’s Day ride. As I suspected, there was a problem with the saddle’s set up. The nose was sticking up. I must not have tightened the set screw tight enough when I installed the saddle, and her riding had pushed down the back, and pushed the nose up.

I got out the carpenter’s level and set about correcting the problem. Just before I finished, Pat came out of the house to take a look.

“You know, I’d like it if you lowered the nose a little bit from where it is.” she said.

I complied. “It’s half a bubble down from level,” I said.

Which brings us to the ride that started off this missive. I questioned her closely about the saddle and its feel.

“Lowering the nose made all the difference,” she said. “This feels just fine. You don’t have to change a thing.”

Once again, the big difference made by a small adjustment hit home. But I had my own version of the story. Just before that morning ride, I had once again tweaked my saddle position — edging it back ever so slightly. I’d been doing that over the last two weeks, a little bit at a time. Each time, it felt better, but each time, I thought things could improve even more. This time, it felt pretty good.

I’ve had a chance to confirm that in subsequent days. My rides on Thursday, Friday, and Saturday were all good ones, with no discomfort on the seat. This morning, I led a B ride out into the country for a 36-mile round trip. I think I’ve finally found the magic spot. The saddle stays right where it is.

It’s a game of millimeters, but if you have the patience to keep at it, eventually you’ll get it right.

I was out for a ride with Mrs. Noob the other day. We were doing a Mopac loop, which is fast becoming an unfavorite of mine after riding it lo these many years. It’s just getting too busy. Traffic whizzes by, faster than ever, and thicker than ever. The shoulder is consistently covered with grit and gravel. And yet, it’s a traditional biking route around here, so it’s something most of us do without even thinking about it.

Anyway, I was tootling along, out in front of Pat by a good margin, when I noticed something odd about my front tire. It appeared that something was flapping on the tread with every spin of the wheel. I was concerned, because it looked like a flap of tire tread. And with the poor condition of the road’s  shoulder, I wouldn’t be surprised if something had cut it. It occurred to me that rather than keep riding on a potentially dangerous tire along an  increasingly dangerous road, I’d better check it out.

I slowed to a stop, liften the front wheel off the ground, and spun it slowly. There it was — it wasn’t a flap of rubber at all, but a pebble stuck to the tread. (I use the word “tread” advisedly, because the tires I run have no tread — they’re slicks. But I mean the center of the tire where it contacts the ground.) Somehow, I had picked up a spot of road tar, and it in turned picked up a sharp-edged pebble. I flicked the pebble off the tire with my fingers, and saw that it left a depression in the rubber, but hadn’t cut into it or, more importantly, pushed all the way through it. I gave the wheel a gentle spin again, and found another pebble — smaller this time — embedded in the tire exactly opposite where I’d found the first one. Because of it’s smaller size, it hadn’t made nearly the mark on the rubber as the other one. But two in one go — yech!

By this time, Pat had caught up to me, and I told her what happened. Her tires do have a tread design, and from time to time I have used an awl to pry small stones from it. She shrugged and said, “Well, no harm done,” and pulled around me to keep riding.

When I got home, I grabbed a rag and rubbed the tar hard, trying to make it disappear. My efforts weren’t 100 percent successful, but at least I haven’t picked up anymore potential flat makers.