I’m on break from academics for another week and a half, and that means I’ve been able to get some rides in on routes that I seldom, if ever, have traveled before. I’ve been out in the Hill Country, over some roads I haven’t seen in a couple of years; I’ve been on the back roads down to my university, and some other spots as well.

There’s nothing like the enjoyment of getting out and seeing new places.

I say this, because once I’m back in my September-May routine at school, my riding becomes rather predictable. I skip Mondays. On Tuesdays, I can get home early enough to do a quick hour ride before dinner. So I go over to the Veloway and knock off three fast laps. That’s a 15-mile ride.

Wednesday and Thursday see me tied up late at work, so I don’t ride. On Friday, I will either come home a little early, or sometimes not go in to campus at all, since none of my classes meets that day. I have dubbed the ride I do on Fridays the “Friday Niter.” It takes me through our suburban-style neighborhood to a turnaround spot about four-and-a-half miles out, then though more residential streets to a nice hill. I fly down the hill, brake hard at the bottom, and turn around the block to climb a hill on an adjoining street. That hill gets repeated twice, and if I’m not warmed up when I’m finished there, I won’t get warmed up. Then, I fly down the hill once more, usually hitting my high speed of the day, and work my way over to the Veloway, where I put in two moderately-paced laps before heading home. It comes out to 19.2 miles.

Saturday morning, I try to get going by eight and head up to Convict Hill. With any luck, I’m meet my friend David on the way, and we’ll climb the main road up the hill, then work some side streets with a couple of short, steep bursts of their own before we zoom back down the hill and ride another three miles or so out to the Mopac loop. We usually hit some tough headwinds coming back on that one, but if things work out, we can achieve some decent speeds through there as well. Then it’s one lap at the Veloway for good measure. By the time I reach my driveway, I’ve gone 27.5 miles. 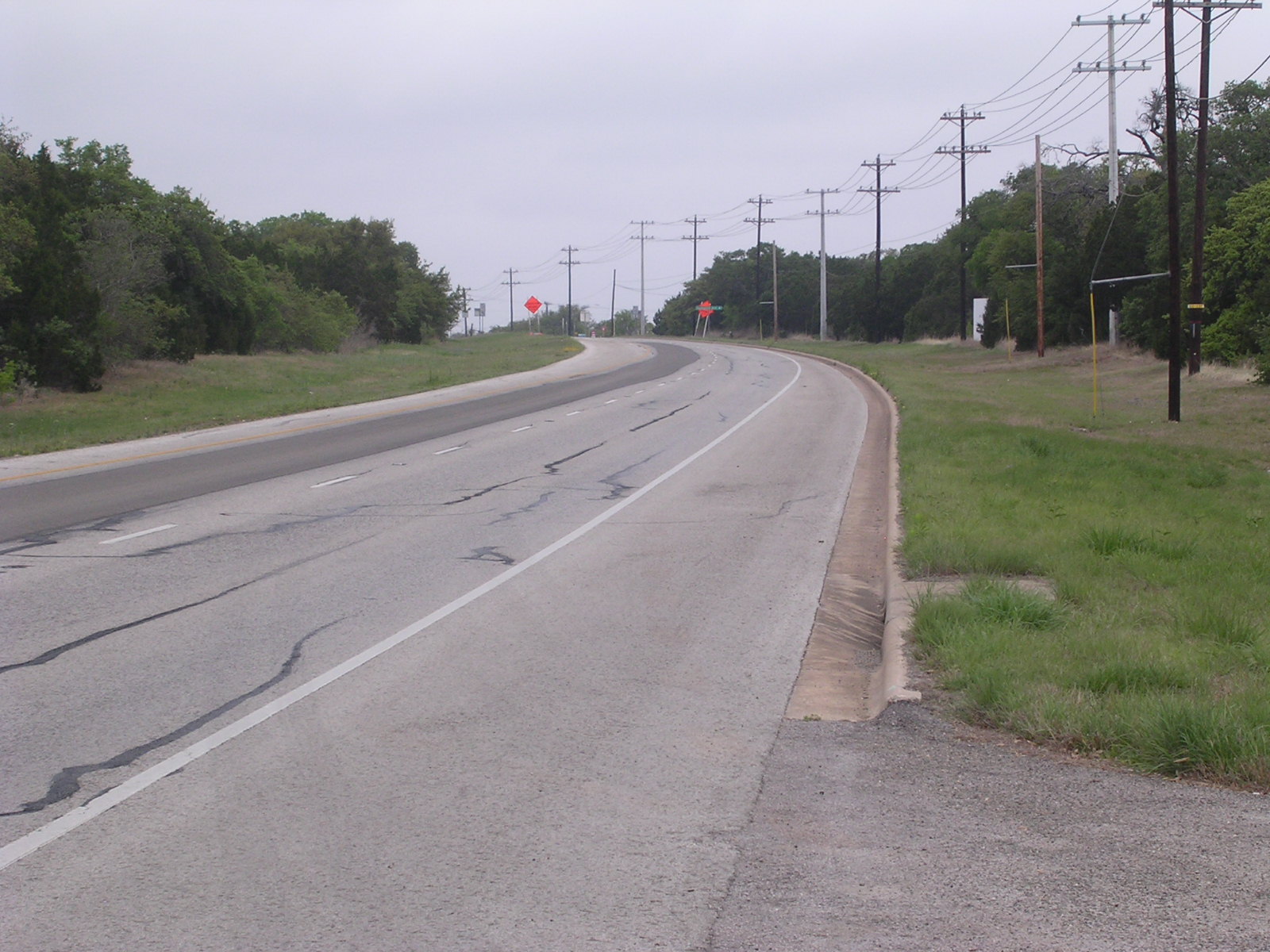 Sundays are club ride days, and most of the time, I make them. We have a rotation of routes at our disposal there, too, from 30-60 miles or so. We mix up the routes, so they’re n0t always the same, but they come around often enough that they become routine, as well.

Now, I’m not knocking routines. Most of these routes provide enough variety close to home that they continue to entertain. Besides, we’re on our bikes, right? But it’s good to break away from routines and explore new areas. And that’s what I’ve tried to do during my break.

But this morning when I threw my leg over the top tube, I had no plan for the day’s ride. And it occurred to me that I had an option right at my fingertips — the Friday Niter! Yes, even though it was Thursday. I set out on the familiar route, did the whole thing at a slightly faster speed than usual, and threw in an extra lap around the Veloway — just for good measure.

At the end, I felt exhilarated and a bit short of breath because of the effort I’d put in. But it’s going to get me prepped for the longer weekend rides, and I think on Sunday I’ll be seeing some more roads I haven’t ridden in a couple of years.

Variety is nice — but your routine routes can be a comfort.

When I asked last week whether you would be interested in building your own bike — or modifying an existing one — I didn’t realize that I’d touched a nerve. Apparently, a lot of riders out there have at least considered modifying a bike, but a good number have already done so — from scratch.

The final results of the poll are in. We had an n of 75. Here are the numbers:

Just a reminder — because the respondents were not randomly selected, the results of this poll cannot be generalized to a wider biking population. That said, I think the numbers are interesting.

Twenty-five percent said they already have built a bike from a custom frame. Another eight percent say they plan to do that. I guess making a bike your own has a lot of attraction for a lot of cyclists, and I can empathize with that. The inspiration for the poll, Tim at An Old Guy on Two Wheels, has finished his custom build and has been riding it around town already. He loves it, and that is as it should be.

For the 26 percent who aren’t interested in working on a bike of their own — well, there’s still time to change your mind.

About three weeks ago, a cyclist was killed while riding on the shoulder of a popular cycling road just west of Austin. A protest ride on his behalf several days later took cyclists from Austin City Hall to the State Capitol to call attention to car-bike crashes; in many cases, car drivers are not cited. Cyclists want more vigorous prosecution of motorists who hit cyclists.

The deceased biker is Verter Ginestra. The group he rode with, CyclingTexas.org, scheduled a tribute ride for him last week, but because of several evenings of rainfall, had to postpone it. It was rescheduled for today.

The ride was to leave from Southwest Cycle Sports, a bike shop Verter patronized. The shop is a 17-mile ride from our part of town, so I figured a ride out there from our usual starting place, then joining the tribute ride, and peeling off to head home from the crash site, would be a good B ride. Our A ride leader thought it could work for him too, but added some miles for his riders.

Southwest Cycle Sports is on Bee Caves Road, a four-lane highway with generous shoulders that sees a lot of cycling traffic. Riders from CyclingTexas, Southwest Cycle Sport, Lake Travis Cycling, and my Circle C Ranch Cycling Club turned out for the ride, along with sundry other riders. I guess we totaled about 50. One of the CyclingTexas riders told me they were pleased with the turnout. Before the ride began, Verter’s wife, Jane, thanked everyone for riding, and said that, if things had been different, Verter would be out with us. A cyclist read a letter of condolence from Lance Armstrong. Group pictures were taken, then Jane told everyone, “Let’s ride!” and jumped behind the wheel of the sag truck. (Click pictures to enlarge.)

The ride was to be a slow roll to the crash site, about 10 miles from the bike shop, but the peloton shot down and up the rollers almost immediately, leaving some unprepared riders way off the back. The group slowed when the lead riders realized the problem. One reason Bee Caves is a popular cycling road is its rollers. The uphills are challenging. The downhills are fast. There’s usually a cross wind to make things interesting, as there was today, and car traffic on the road is usually heavy.

I suppose it’s impossible to put 50 cyclists together without problems. It’s just that all the problems seemed to be happening to the Circle C folks today. Donald broke a spoke. That limited him to maintaining only a 21 mph average for the rest of the ride. Steve got a flat. Mike and Laura, on their tandem, dropped a chain. But everybody got back together by the time the group turned off Bee Caves Road south onto Highway 360, then snaked through the Westlake neighborhood in a retracing of Verter’s last route. We turned north onto 360 and rode back to the intersection of Westbank Drive, where the crash happened. I was disappointed to learn that a ghost bike that had been set up there had already been vandalized and torn down. I’m told it will be replaced.

From there, the Circle C group headed south again to our home base, while the rest of the riders returned to the bike shop. My total mileage was 39 — the A group, which added some additional hilly roads — wound up with 45.

The ride was a reminder that we are all vulnerable while on our bikes. Verter was riding on a wide shoulder when a car left the road and hit him in an effort to pass traffic. It’s not enough to be doing everything right — you can still be caught unaware. The driver of the car that killed Verter — an 85-year-old man — still has not been charged as of this writing.