I went for a ride this afternoon with my friend John T. We agreed to meet at Austin’s Veloway for some slow laps. The ride would be a repeat of one we’d done a few weeks before, with the difference that John has really come back from his cycling layoff and has made rapid progress in endurance and speed.

Neither of us planned to push the pace. He’d just come off a 50-mile ride over the weekend, so was looking for some recovery. I’ve been pushing lately, and needed a break from that. We fell into a comfortable tempo, and chatted about all sorts of things — few of which had to do with biking — as we cruised the three-mile circuit. 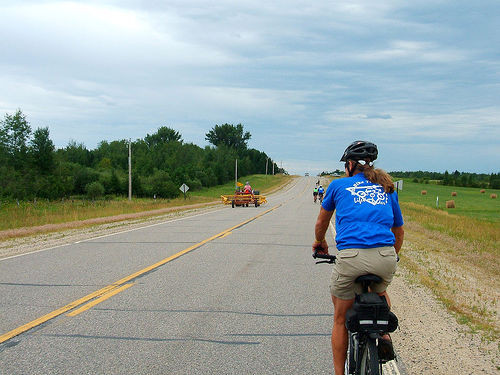 But at one point, about halfway through our ride, I gave a start.

“You know,” I said to John, “I ride here a lot. I’m probably familiar not just with every turn of the track, but with every crack in the surface. But today, I have a weird feeling. All the curves and turns look alike. I couldn’t tell you where we’ve been or where we were at a given time.”

I looked at my surroundings, and knew instantly that we were on the backside of the Veloway, approaching a nice straightaway that invites the cyclist to crank up the speed. But before my fresh realization, I hadn’t been aware of where I was. I was caught up in the conversation and the ride.

I glanced at my bike computer. It said we were averaging 14.7 mph.

We were almost up to the low 15s that I like to do when I’m out alone. John’s been averaging a little less than that on his rides.

Back when I used to run (okay, jog) I remembered experiencing the elusive runner’s high once or twice. Runners love to talk about it, probably because it happens so rarely. Marathoner and former Runner’s World editor Amby Burfoot has computed that he’s had a runner’s high during just .00185 percent of his runs. In fact, it happens so seldom that some scientific researchers have been unable to account for a runner’s high in their data, and have written papers debunking the idea.

The runner’s high is usually described as a sense of euphoria, where the activity one is pursuing happens without effort. That’s what I went through this afternoon. We weren’t burning up the track, but we were pedaling at a good clip. Burfoot says that to experience a runner’s high, you must stress yourself by running a little slower — but not much slower — than your 10K race pace. That produces a fatty acid called anandamide, which can cross the blood-brain barrier and cause the euphoria runners seek. Anandamide is also called “the brain’s marijuana,” because of its natural high effect. We must have been in that zone. (By the way, that “endorphin rush” people cite during or after workouts is likely something else, because endorphins are too large to cross the blood-brain barrier.)

As I said, it didn’t last long. I could carry on a conversation with John, and maybe it’s because I was paying more attention to what we were saying than where we were going that I had a sense of being disconnected from my riding. But then I snapped out of it. That’s okay. It was a great feeling — one I’ve never had before on a bike. I hope to experience it again.

Have you ever had “biker’s high?” Was it similar to mine, or something completely different?