Sorry to be so long between posts, but it’s been a busy week around here. My wife’s mother passed away last weekend, so everything was put on hold as trips had to be made, arrangements finalized, and services held. We’re back to normal now.

I was ready for a good ride this morning, and the club president designated Fitzhugh Road as our route this week. That suited me fine. I like Fitzhugh, since it’s out in the country and features a lot of rollers. Usually, I’m on my own, dropped within the first 10 miles. I turn around at a road that will give me a 30-mile round trip. Today, I planned to go the entire route, for a 46-miler.

Maggie, whom I rode with last week, was on hand as well. She’s relatively new to the club, and had only ridden Fitzhugh once before, on her first ride with the club. That time, she tried valiantly to keep up with the A’s, but couldn’t do it. Today, with me in tow, she had a good chance to see the route.

The ride got off to a fast start. The A’s tend to hold back and warm up for about six miles or so, but today, they were gone in about three. “These things take on a life of their own,” said my friend Rick, who himself was “moseying” along on the ride after going hard the previous day. “Somebody goes off the front, and some others think they have to keep up with him, and next thing you know, it’s like a race.”

We were doing anything but racing. Although Rick might have been moseying, it was all I could do to keep him in sight. Maggie, too, got well out in front. The endless rollers kicked my butt, which bothered me after riding well last weekend on another route that had a lot of rollers. But these were more frequent, and some were tough.

Finally, it was just Maggie and me. We decided to throttle back a bit and enjoy the ride. After all, we still had to get to the turnaround point, and then make our way back home — another 23 miles.

Once we cross Ranch Road 12, the landscape becomes more rural. I had heard of a ranch with wildebeest along the road, but had never seen them on previous trips along here. But Maggie, who was leading me by a bit, called out, “Wildebeest!” and there they were — a nice herd of maybe a dozen or so, off to the left, milling around in some trees. After passing the exotic game ranch last week, this was another wildlife treat.

We had almost reached the turnaround, when she called out again. “Look at the turkey!”

A wild turkey was poking at some dried grass, several paces back from the road. We were almost at the turnaround, and knew we would see him again on the way back.

The nice thing was, the group was still at the turnaround when we got there. We had a chance to grab some water, and shared a sandwich. But the last ones to the rest stop get the shortest rest, and in minutes, we were headed back the way we had come.

Sure enough, the turkey was still pecking away when we passed by again. And once again, we were quickly dropped by the A’s. But just as in the previous week, some of them were sidetracked by a flat tire, that turned into two flats as one of the guys who stopped to give aid was also punctured.

We regrouped at a convenience store to shed layers, now that the sun was warming things. That was good, because we all got to start in a group again, and the first 200 yards after the convenience store is in the center lane of a four-lane highway, so that we can make a left turn onto another semi-rural road.

It took no time for the A’s to leave us behind. We both laughed, and Maggie allowed that going slower was good, because that way, I could show her the tricky twisting route back through an unfamiliar neighborhood. We finally pulled into our regular Starbucks starting point, 46 miles and 2600 feet of climbing under our belts.

The only seats left at the outdoor tables were with several of the really fast A’s, who invited us to join them.

“Did you see the turkey?” asked Maggie. “Turkey? Uh uh,” said one. “It was pretty neat, right along the road,” she said.

“Did you see the wildebeest?” I asked. They shook their heads again.

“You see, the problem with being fast riders is that you’re focused on the road straight ahead, and you miss all the cool stuff,” I said.

“We saw a roadrunner,” said one of the guys. But we can see roadrunners on any trip around the Veloway right here in town. Wildebeest and wild turkeys, not so much.

So being a B-level rider does have its advantages. I’m already looking forward to next week’s ride to see what we will see that the others, in their single-minded pursuit of speed, will miss.

Well, not in the realm of speed. But the Sunday morning club ride turned out to be a real morale booster for at least two of us B riders.

We were going to head out on a route I’d been wanting to do for some time, but for some reason never got around to it. I had ridden it last about three years ago, and recalled that it approached 50 miles. It also features a few hills.

Twenty-four riders set off at 8:15 on an overcast day, with temperatures hovering in the low to mid 60s (18C). As usual, we quickly separated into a fast group, a less fast group, and the B riders. Four of us made up the B contingent today: me and Maggie, who has been riding with the club for a couple of months, and two newcomers, Mark and Victoria. Actually, Mark qualified as an A rider, but he was content to stay back with Victoria.

By the time we reached the rural part of the route, we couldn’t even see any riders ahead of us anymore. I directed Mark to turn right onto a road that leads around the back side of a country club, hoping that was the way the A’s went — not that I thought we’d ever see them again.

But in a few minutes, we came upon several riders alongside the road. Janice, who is usually near the front of the pack, had hit what she called a “crevasse” in the asphalt — a big crack that swallowed her rear wheel. The tire was badly damaged, and she was lo0king for someone with a boot. I carry a piece of a ride number to serve that purpose. It’s made of a Tyvek-like material, and it’s no problem to cut a ride number in thirds, and stuff them into the seat bag.

Too bad I hadn’t done that recently. I came up empty. Jerry (not the same Jerry who broke his leg in a fall a couple of weeks ago) did have one — a nifty little unit the size of a credit card he bought from Park Tool. Janice made do with it — “I really needed several today,” she said — and abandoned the ride to head home.

A mile or so up ahead, the A’s had all gathered to wait for Janice to catch up. When I told our ride leader that she would be turning around, we all headed out in a big group again. Then the fun really began.

Satterwhite Road is a rural road in Hays County that gets a lot of bike traffic on Sundays. It’s fun, because of its rolling hills. I was following Maggie at speed down one of the hills, when the road surface at the bottom just didn’t look right. It changed in an instant from semi-smooth old asphalt to torn up. It looked as though a giant scraper had been over it, ripping up the old asphalt and leaving only what was underneath — hard-packed dirt, gravel, and stones.

We all hit the brakes and rode gingerly through the mess. Two riders flatted along here. Whenever we hit a stretch of asphalt that hadn’t been torn up, we rejoiced — only to round a bend and get hit with another bad road surface. This lasted for several miles, when finally we could turn onto a new road.

I saw the A’s up ahead, waiting at an intersection. It looked like they were going to take a shortcut back home. But Maggie and I had discussed our ride options, and she wanted to go a little longer. We shot past the startled A’s and kept going. Our route added probably six miles to the one they chose.

After a rest stop at the convenience store in Creedmoor, we set out for home. Maggie had to pick up her son from a sleepover at noon, and we would be hard-pressed to get back by then. We both pushed it harder than usual, taking turns at the lead.

Our route passed the exotic game ranch behind the big landfill, and the animals were out in larger numbers than I had seen before. Lots of small deer and antelopes, but also ostriches and emus, a zebra, and a number of scimitar oryx — African antelope with long, curving horns. Magnificent!

Just before reaching the Starbucks where our ride began, Maggie and I peeled off in different directions, she to get her car and me to head the last mile home. This afternoon, the club president posted his summary of the ride. The A’s did 41 miles. The B’s — Maggie and yours truly — did 48! I believe this is a first. The B’s have never ridden farther on a club ride than the A’s. In the overall scheme of things, not much perhaps. But it was a little feather in the cap for Maggie and me. 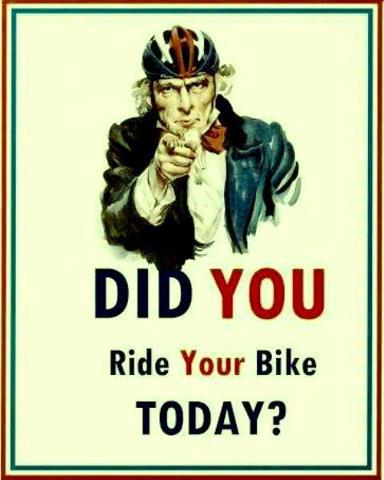 I had a big day today. I got out and rode. It was my first ride in April, and it’s already April 5th. I’m not doing very well in the “30 Days of Biking” thing that’s being highlighted on other biking blogs.

The idea behind Thirty Days of Biking is to ride your bike every day this month. Anything counts: Commuting to work, running a quick errand to the store, or the mailbox, or doing a longer weekend ride.

“We advocate daily bicycling because we believe it enriches lives and preserves the Earth,” says the website, 30 days of biking.com.

I bike because it’s good exercise and because it’s fun. I don’t throw a leg over because I have some idea that I’ll prevent the polar icecaps from melting. And because I don’t fully buy into the idealistic environmentalistic notions of the 30 Days movement, I’ve ignored it for the past several years, and will continue to do so.

But if the 30 Days idea inspires a casual rider to get out more often, I’m all for it. Bring on more riders. Grow the cycling community.

But don’t be alarmed if I miss a day here and there — or several times in a row.