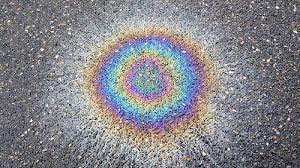 I got home from work early Wednesday, and made ready to knock out some quick miles on the bike. It was a hot one — 98 degrees (37C) at 3:30. I dressed in my loosest, lightest weight jersey, some old lightweight bike shorts, and filled my water bottle with ice.

When I reached the Veloway, I was the only one on the three-mile track. Not a car in the parking lot. Not another bike to be seen.

I decided this was not a day to do fast laps. Just maintaining a steady cruising speed would be a challenge this day.

After three laps, I decided to head home. That would give me a 15-mile ride — just about one hour on the bike. Plenty for these conditions. I crossed the gravel parking lot and pointed the bike up LaCrosse.

About a mile from the Veloway, I turn off LaCrosse onto Escarpment to make the last stretch home. Would the stoplight be green or red today? It’s usually red. Today, it was red again, but the cross traffic had a left turn arrow, and that meant I could go ahead and make my right turn without interfering with any cars.

I turned — slid — and the next thing I knew, I was on my stomach in the intersection, with my bike clattering over me. WTF?

The drivers around me just kept going. I got to my feet quickly, and picked up my bike and carried it to the curb. I had some road rash on my right shin, and blood trickled down into my sock. I felt a tingle on my right hip where it had hit the pavement. The shorts were still in one piece.

A glance at the intersection showed me the problem. Some oil had thinned out under the bright, hot sun, and spread a small slick right in the intersection. I must have hit that slick just as I applied power to the pedals to turn the corner. Although I could see the slick clearly now, when I walked over to where I had been when I slid, it wasn’t obvious at all. The sun didn’t reflect off its surface from this angle.

My right shifter was bent inwards, and I couldn’t pull it back to its normal position on the handlebar. I would have to ride the last two miles home with my right hand at a funny angle. I could get out an Allen wrench and adjust it later.

And as I was preparing to get back on the bike, I noticed one other casualty. My bike computer, lying in the intersection. I would have to get it, but now cars were turning across my path. I had to wait. I did — and I watched as one car made its right turn, right over the computer. On my way home from work Friday, I’ll stop at Wal-Mart and get a replacement. It’s only $12.

Now that we’re in the hot part of summer, take care on the roads. Rain won’t be a problem, but oil slicks can be.