Well, here we are again — at the end of another year. I suppose it’s as good a time as any to take stock of my biking, where it is, and where I want it to go from here.

It looks like I’ll finish the year with about 3,750 miles. I thought I would fall well short of the 4,000 I rode last year, but it turns out that if you ride a lot, even if the rides aren’t all that long, the miles do pile up. And since I hadn’t set a mileage goal at the beginning of the year, I have to be satisfied with what I’ve done.

Today was a good example. Nice day, 67 degrees (19C), sunny, moderate wind from the south. My wife wanted to go for a ride, and suggested a Mopac loop. That’s a tad over 13 miles round trip from our house — a good ride for her, but not enough for me. (Funny story about today’s ride: Before we left the house, she noted it was 66 outside, and was anxious to get going. I was a little surprised when she wore her new long sleeved jersey with the windstopper panels and the brushed insides. Then, about five miles into the ride, she asked to stop so she could shed her neck gaiter and her full-fingered gloves. I suggested that when temps are in the 60s, she can get by with a short-sleeved jersey and arm warmers, and maybe shed the arm warmers halfway through the ride.)

However, as we were wrapping up, we got into an involved conversation about her work, and the next thing you know, I’m pulling into our garage and putting the bike away. I hadn’t even realized that I was supposed to take off and do another 10 miles or so. Okay, today will be my easy day, and I’ll ride a little stronger Friday and maybe Saturday.

I’ve already blogged about my relatively short rides this year compared to 2010. And looking back, it seems I had planned to ride longer this year. One resolution by the wayside.

In addition to not riding long, I realized that except for a metric century way back in March, I never really pushed myself on the bike this year. I never felt really done in after a ride. The rationale for that is that I’m a recreational rider, and I’m not out to kill myself by training hard. But no training means no improvement. I do enjoy riding for riding’s sake, and not pushing really hard, but it’s obvious I have to do more.

So, what are my resolutions for the New Year? I don’t do formal resolutions as a rule, but I think we all have to have some idea of accomplishments we’d like to pursue during the year. So here’s what I’m thinking:

My weight is exactly where it was last year at this time, and two years ago at this time, and…you get the idea. So is weight loss a goal for the coming year? Nah. If I say it is, then don’t do it, it will be another unachieved goal. If, by some stroke of good fortune, I do lose some weight — well, then I’m ahead of the game.
So, that’s where I’m headed in 2012 — more time in the saddle. I hope you’re able to ride a lot, too. Have a happy and prosperous new year. 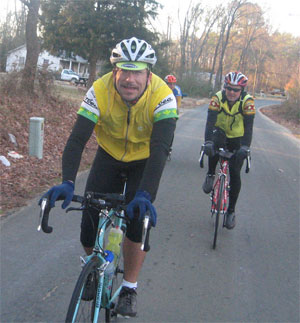 Spring is coming. We’ve been enjoying mild daytime and cool nighttime temperatures here lately, so sleep comes easily and lasts long. I look forward to the beginning of spring every year, because spring heralds the onset of long ride season.

During winter, I think many of us are prone to cocooning. We curl up in our warm houses, and when we venture out in our layers of cycling gear, the rides are just not as long as they would be at other times of the year. Some of us tough it out on indoor trainers. Others hit the gym for crosstraining. I try to ride as much as I can, but of necessity, the miles aren’t there in the winter.

But with nicer weather, there’s no reason not to get in some miles. The kind of ride I have in mind is the kind that takes at least two hours to complete — so it’s probably a minimum of 30 miles (50 km) or so. It’s done at an easy pace. I like to average around 15 mph for the ride. I’m not racing for the city limit sign, but at the same time, I’m not lollygagging.

The whole point of doing these longer rides is to build up your aerobic threshold. These are your “base” miles, and all the other training you do depends upon a solid base. As always, you can’t just decide one Sunday that you’re going to ride for three hours if your normal weekend winter ride is an hour. Add a half hour to your long rides each weekend to extend them, and to condition yourself gradually.  Back when I was a jogger, we used to call these sessions LSD, or long, slow distance. Approach your bike rides with the same attitude.

Then, you can start throwing in some training elements. Every 15 minutes, ramp it up a bit and pedal harder for a minute or two. Cycling coach David Ertl suggests that when you’re 20 minutes from home, pedal at a faster pace for about 10 minutes, and use the remaining 10 minutes of your ride as a warm down.

My own mileage has been lagging of late — I’ve done nothing more than 30 miles so far this year. I need to get in some longer weekend rides. This is probably my favorite time of the cycling year.

Sorry, ladies.  Didn’t mean to offend.  But it’s a good mnemonic for this time of year.  As the weather cools down, lots of bikers are moving to their indoor trainers.  Those of us fortunate enough to live in a year-round biking climate will change their riding habits, and not go out with the speed and intensity that marks the warmer months.

At this time of year, cyclists need to think about riding long and slow.  And that means Time In The Saddle.  TITS.

The pros know this.  For them, winter is an important part of their training regimen.  They put in lots of miles, and they don’t ride all that fast.

Time In The Saddle allows you to build your base — or rebuild, after some intense summer events.  It also trains your body differently.  You’re burning fat more efficiently when you ride at slow speeds for long periods of time.  When you ride hard, your energy comes from glycogen.

You’re building endurance.  You’re improving your aerobic system.  You’ll be able to ride faster longer.  Your bottom will also get used to being in the saddle for long periods of time.  Don’t underestimate the importance of comfort in training.  A comfortable biker is a fast biker.

In fact, some coaches say it’s a good idea to forget about mileage on your long rides.  Think about Time In The Saddle instead.  If your weekend long ride is 50 miles, try riding three hours, and adding time from that point.

My new derailleur is in.  I’ll be back on the road bike this weekend.  I can’t wait to grab some — uh, you know what I mean.