This evening, I caught myself staring blankly at the computer screen, paying no mind to what I was doing. I realized that I had been daydreaming — my mind off somewhere in the sunny future, watching myself ride and ride in a “must-do” event.

Actually, I wasn’t that far off in the distance. I was thinking about the MS 150 coming up in April. It’s got to be one of the premier biking events for me. I’m looking forward to it, and am already getting apprehensive that I haven’t been putting in the miles I need to to get ready for it.

The MS 150 runs from Houston to Austin over two days. It’s really 180 miles — 100 the first day and 80 the second. The organization of the ride is super-efficient.

Thinking about the ride takes me back to a recent letter from reader Bill Wood of Ft. Collins, Colorado. “I’m going to ride in Italy some day,” said Bill, who, after pounding the pavement as a runner in the ’90s and the Oh-ohs, is rediscovering the joys of road biking. Bill wants to know what big cycling events we’d like to do — if not this year, then sometime. 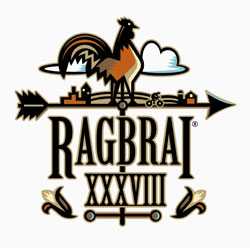 Having lived many years in Minnesota, I’m well aware of RAGBRAI — The Register’s Annual Great Bike Ride Across Iowa, one of the grandaddies of cross-state tours. I would love to take a stab at that sometime, complete with the ritual dipping of the front tire in the Mississippi River when the ride is done. That’s a ride I first thought of doing 25 years ago, when I just rode my bike casually around the neighborhood. I never acted on my thought, though — maybe it’s time to put RAGBRAI on my Bucket List.

If things work out right, I’ll even have a chance to meet Bill this summer. He’s coming to Texas for the Hotter ‘n Hell Hundred in Wichita Falls, and I’m planning on riding in that one, too. It’s a flattish century ride, but temperatures in late summer can be over 100°F (38°C). However, it’s also a Happening, if you’ll forgive the ’60s expression, with around 11-12,000 cyclists at the event.

So, what better way to spend a chilly, dark winter night than thinking about rides you’d like to do? What’s a “must-do” event for you? What tour, event, or location would you ride if nothing stood in your way? Go ahead and comment here, or shoot me an email, and I’ll compile everyone’s thoughts.

A dream ride gives us a goal to shoot for, and it’s still early enough in the year to be setting goals.

Our usual Sunday morning club ride had a twist today. Instead of meeting at our neighborhood Starbucks and heading out from there, we went into Austin just south of downtown to Bicycle Sport Shop, one of the bigger bike shops in town. BSS has a club of its own called the Austin Flyers, and their Sunday ride today was the annual “Le Burrito” ride.

Yes, I know the correct article before “burrito” is “el,” but what big bike race is going on across the pond? They’re using the French article “le,” to add a little je ne sais quoi to the proceeding. Chipotle was a title sponsor of the Garmin-Slipstream team last year, and they’ve kept up their interest in bike racing. Everyone who came out for the day’s ride would get a free Chipotle burrito at the end, and could wash it down with free beer from an area microbrewery, Real Ale.

The parking lot at BSS is generous, but I figured the places would be gone soon, so I got there early. The first person I saw was Mike Weiland, he of Mike’s Bike Blog, which I read regularly. He was doing the 60-mile ride today, while I would do the 35. We caught up for awhile, then went about our ride preps.

By this time some of my club pals were showing up. It looked like we would have a good showing at the ride. I looked out over the crowd of bikers as they gathered in the staging area at the end of the parking lot, and my friend David mentioned that the BSS web site had said 324 riders had signed up. There looked to be some walk-ons, too. What we won’t do for free food and beer!

The ride itself went into the countryside southeast of the city, an area where we sometimes do our Sunday club rides. But getting out of town from BSS required a trip down South 1st Street. Not a big deal, except the street was a lot hillier than I’d remembered, and the hills came right away, before we were warmed up. That stretched out the peloton quickly. By the time we reached the gas station/convenience store rest stop at the 18-mile halfway point, I was ready for the break.

The day was quite humid, but not as hot as it’s been around here lately. Still, I felt drained, and managed to drop off the back of my group on the return leg, which would involve a route through the city I’d never taken before. I got caught by some Austin Flyers riders, and followed them back to the shop, where the burrito feed was well underway. 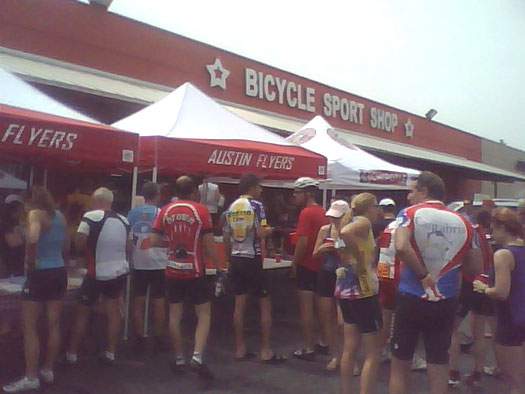 Lining up for burritos and beer at the end of the ride. 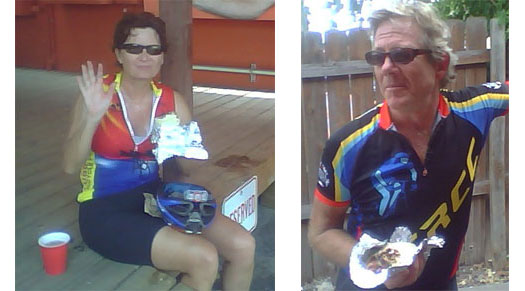 Fellow club members Penny and Bob with their post-ride sustenance.

The Flyers assured us all that they’d bring back the ride again next year. I think we’ll be in the field for that one, too.