Although lots of bikers pack their bikes and take them along on trips, we decided against the hassle for our recent vacation. Instead, I contacted a local bike shop to see about rentals. If you’re ever planning to rent bikes in a distant city, my experiences may be of some use to you.

Traverse City, Michigan, has a couple of good bike shops for a city this size (14,000). I got in touch with McLain Cycle and Fitness, since they were the first to come up in a Google search. McLain’s has an online rental system, and I decided to use that.

They offer road bikes, “comfort” bikes, cruisers, tandems. My wife, Pat (she prefers I don’t call her Mrs. Noob), rides a hybrid at home, but wanted to rent a flat bar road bike for the trip. No luck. The road bikes are all drop bar bikes, and the “comfort” bikes are hybrids. I ordered a comfort bike in large size for her, and a road bike in 56 cm for me.

I placed the order six days before our arrival. When I received no confirmation, I called the shop on Friday — the day before we got to Traverse City. They had no record of our order. I repeated the order over the phone, and asked for clarification about the comfort bike/hybrid bike issue, and whether any flat bar road bikes would be available. No, said the clerk, only a hybrid. OK.

When we got to the shop the next day, the clerk I had talked to wasn’t there, and the one on duty was confused. We finally found that a 56 cm Specialized Allez had been set aside for me. They put on SPD-SL pedals, and I was ready to go.

It was less easy for Pat. The shop had no large size hybrids. We confirmed that no flat bar road bikes were available, then she tried out an XL Specialized Crossroads and one in a medium size. The bike mechanic insisted that with a seat post change, the XL would fit Pat fine. He made the change, she rode it around the parking lot, and said OK.

The shop threw in two helmets and two water bottles, and charged us the weekly rate, although we would keep the bikes for eight days.

As it turned out, I was pretty happy with the Allez. It came with Sora components, which I’d never used before, but which gave me no trouble. The saddle was a different model than the one on my bike, but it was close enough, and by the end of the week, I felt quite at home on the Allez. 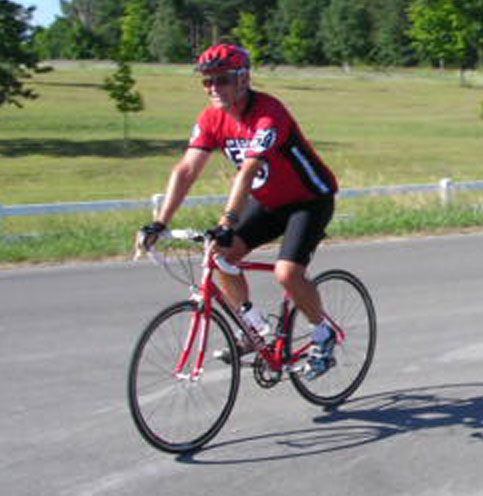 For Pat, the experience was not as good. Her own bike is a hybrid, with a high stem that puts her in a very upright position. The Crossroads was very upright, too — which she likes — but the XL size made her feel as though she were riding a tall horse. Its handlebars were almost a foot higher than the ones on my bike. She quickly dubbed it “The Beast” — a name that stuck. 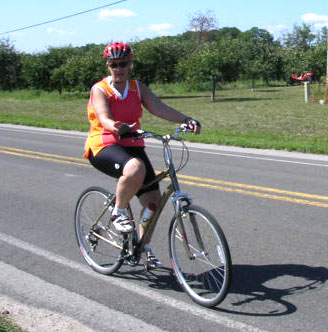 Pat aboard The Beast.

They fitted it with Look pedals, and although they were the same kind she uses at home, she never really adjusted to them. She unclipped from them too easily, which made uphills hard, since she couldn’t pull up on the pedal. I adjusted the tension, and then she felt permanently attached to the tall machine, which made her uneasy, especially one day when we spent most of the ride along a somewhat busy highway.

She did one hilly ride of 23 miles with us, but beyond that, didn’t feel comfortable enough with the bike to ride it for more than six or seven miles — on flat roads.

When we returned the bikes to the shop, checkin was almost too easy. We gave our names, they took the bikes, and said, “Thank you. Have a nice day.” I was surprised they didn’t ask about any problems, and mentioned that the Allez worked out great, but the hybrid, not so much. They didn’t seem interested, and went about their work. We left the store.

What did we learn from our renting experience? First, shop around. There is another bike shop in Traverse right next to McLain’s. If we had bothered to check, we might have found something more in line with Pat’s needs. Second, get confirmation. If the shop’s web site doesn’t indicate that the order has been received, follow up with a phone call. And on the call, be sure they have all the necessary information. I was more than a little miffed that they didn’t have a bike in Pat’s size. Third, make sure it’s right. One quick turn around the parking lot isn’t enough, especially if you’re going to keep the bike for more than a few days.

Will we rent again? Sure, probably. It’s too convenient not to. But next time, we’ll do it with our eyes open.