Guest poster Don Blount is back, with an item on getting back to his best weight — and staying there.

For some, it may not be their thing to weigh, measure or tally just about everything they eat and drink.

But it works for me.

This system has helped me lose weight and keep it off for nearly two years.

And this philosophy has become more than a “diet” or “eating plan,” it has become part of my lifestyle. It works with my personality.

I watch what I eat, schedule my exercise and as a result I am able to maintain the weight that I want.

I have written previously about my weight loss, counting calories, etc.

I learned that for me to maintain a good cycling weight and a better weight overall than the 196 pounds I carried a few years ago that I need accountability.

It is not enough for me to go: “Oh, I will eat smaller portions and exercise more.” I need something to tell me what a portion size is and how much exercise I have done.

I learned that it is difficult for me to eat solely 1,750 calories a day I find that a normal day’s intake for me is about 2,600 calories. A normal day of movement for me – exercise, walking and the like – burns about 900 calories, which reduces my net calorie intake to that 1,750 range. And it also means the proper combination of protein, fat, carbs, etc. but that’s a topic for another post.

Going into hip replacement surgery I knew that the level and intensity of my exercise would be greatly restricted, by my standards I basically sat for five weeks, and I expected to gain at least a few pounds. And have gained about five pounds.

Still, I am not sweating that weight gain, at least not yet, as I become more active I expect to get back to my normal riding weight.

As you know, I’ve missed the equivalent of a month on the bike, with just a few days sprinkled in there where I actually got a chance to ride. And boy, do I know it.

Our friend, Don Blount, has just told us about the rehabilitation regimen he’s putting himself through to return to biking from surgery. Don is a focused, goal-driven kind of guy. I take more of a recreational approach to my biking. I want to have a good day on the bike, maybe cover a decent amount of ground, and feel like I’ve accomplished something when it’s over.

It didn’t feel that way Saturday.

My own fault, really. We’ve had a good amount of rain here this spring — for Central Texas, that is — and my yard has exploded in green. The growing grass, combined with the live oaks that have shed last year’s leaves over the last few weeks, have left me a mess to take care of. I spent much of Saturday morning shoveling leaves into bags (that’s right — there were so many in such big piles, I didn’t have to do a lot of raking), trimming overgrown ground cover around trees, and cutting the grass in the front yard for the first time this year. By the time I was done, I was bushed.

But it was a beautiful, 90-degree (32C) day, and there was no way I was going to pass up riding under these conditions.

I picked a favorite route, one that would take me through my neighborhood and out to Austin’s Veloway. If I did two laps of the Veloway after the trip to get there, I’d have about 18 miles.

But halfway around my first lap of the Veloway, I knew I had had it. I completed the lap and headed home. Fifteen miles, and I was so tired that I flopped on the bed in my bike clothes, immediately fell asleep, and didn’t wake up for three hours.

Okay, it was the yard work and the 90-degree temps that did me in. Sunday would be better, because I was going out first thing in the morning.

I met my riding buddy Maggie, and we agreed to take a new trail (new to us) that would get us up a hill to a busy road. She had been on the trail once, and was unsure about the exact route, but she led the way without a hitch. The trail was rough in spots, but a good one. We circled around to a paved hill near my house, and she suggested working our way over to another trail that would take us back down the hill.

This is a rough trail. I glanced off a rock, and my foot flew off the pedal. It was all I could do to keep the bike under control as it picked up speed down a rocky cut. I didn’t want to brake too much, because if I hit a rock at slow speed, it could mean an endo.

We got down it okay, but the skies decided to open up then, accompanied by bolts of lightning. We headed over to my house before the worst of it hit.

My wife was happy to see Maggie, because they had a lot of catching up to do. After a half hour or so, the weather had cleared, and she headed home. I showered, then sat down at the computer to do some work.

It was getting up that got me. The hilly trails rendered the backs of my thighs really sore. I could walk it off all right, but for the rest of the day, whenever I stood up, I had to wait for the soreness to pass.

Maggie told me she had had hip problems at the same time I was off the bike, so we’re both embarking on comebacks of our own. I hope it won’t be a long one — there’s a lot of riding to be made up. But I’m out of practice, and I know it.

Guest poster Don Blount sets an example for us all by the way he’s coming back from hip replacement surgery.

April 20 marked 39 days since I underwent surgery to replace my left hip.

Since then my focus has been on recovery, rehab and rest.

This is my second hip replacement; my right hip was replaced with an artificial joint in 2004. But this time around a less-invasive surgery has enabled me to recover more quickly.

Because I was fit, my surgeon’s directions was to monitor any swelling I had in my leg. A physical therapist instructed me to not overdo it.

I was on a bike trainer by Sunday. I was not pedaling fast, hard or with any resistance but I was pedaling. 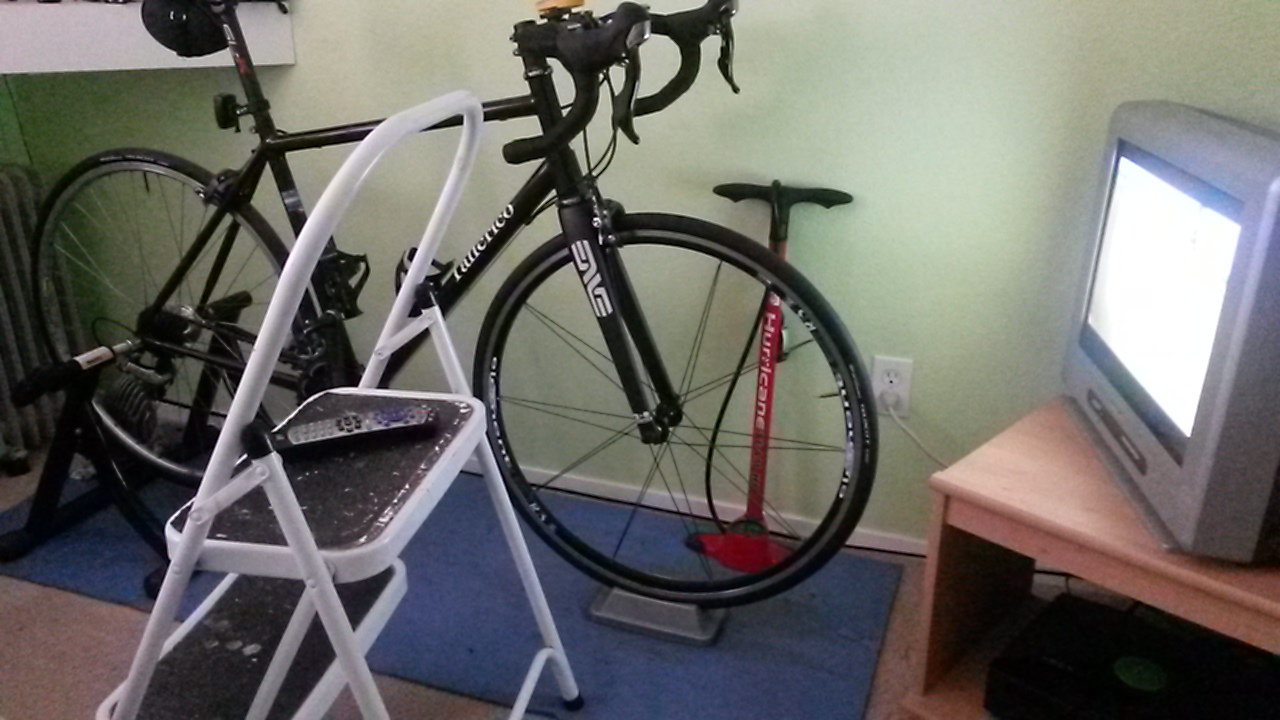 I spent my days doing rehab exercises and reading while elevating and icing my leg. I read nine books in 30 days and watched live at least part of every game of the NCAA men’s basketball tournament. 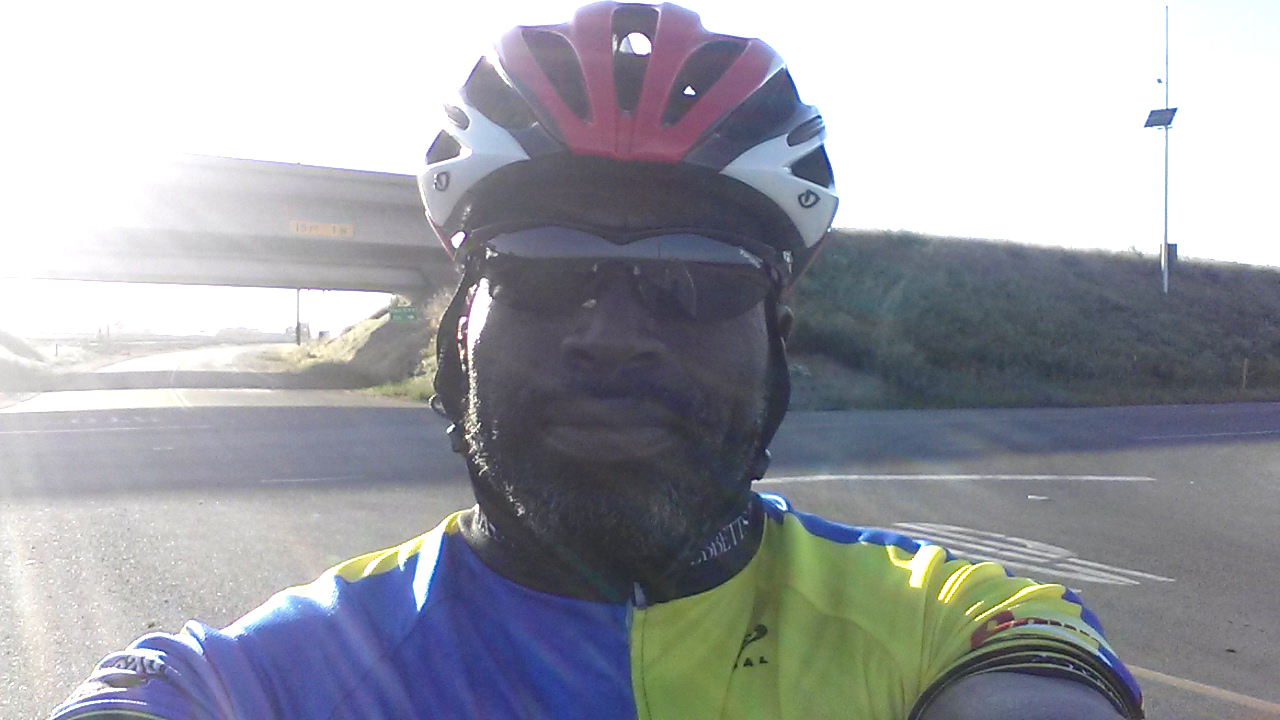 I am still working on walking without a limp and building my stamina. I find that rest includes a lot of naps after rehab work.

Without question, cycling has helped me through this process. Physically, I am in better shape and that has its obvious benefits. But mentally having ridden hills, centuries and double centuries helped me too. As I have told others, recovering from hip replacement surgery is nothing compared to going up a long difficult climb.

Overall, I am pleased with my progress. I returned to work on April 15 and although I am doing well, I do not receive full clearance until June 12, which is three months after surgery. Hmm, that would put the Bass Lake Powerhouse Double Century just under four months away….