Guest poster Don Blount rides in bad weather — indoors, on his rollers. He discusses some of their pros and cons.

I feel fortunate to live in a part of the country where outdoor activities can be done year round. I fully appreciate that, having grown up in Philadelphia and living in Denver for several years.

Where I live now in Northern California, the rains have settled in. Other parts of the country are dealing with snow or high winds during winter. Out here we get rain, fog, wind and much lower temperatures. I’ll ride in cold weather. I’ll ride in the dark, in fog and other inclement weather. But I have my limits. And although I’ve gotten caught in the rain, I won’t go out for a ride in the rain. I’m not that hard core, or crazy. But instead of curling up next to the fireplace with a good book or the television, I’ll still ride. Instead of riding outdoors or in a spin class or a stationary trainer, I’ll ride on my bike rollers.

I purchased these rollers in the fall of 2008 for a few reasons: 1) To ride when the weather was too bad to go on the road. 2) To practice technique and handling skills.

I’ll admit that I didn’t quite know what I was getting myself into. It took me some time to get used to the rollers. I started out riding in a doorway and took my share of tumbles before being able to move to less confined places. One fall caused my wife to come rushing out to the garage to see what the problem was. I fell in the opposite direction what I had to grab onto. It is a sinking feeling to see something that could save you from going down slowly float out of your grasp. Fortunately by the time my wife arrived I was on my feet, with some of my dignity, claiming that nothing had happened. Later I found that I had bent my derailleur hanger.

What I’ve found that makes rollers most awkward (aside from learning to balance) is getting on and off. The rollers elevate you several inches off the ground, so getting on, moreso off, can be challenging because you just have this little skinny rail to balance your foot on. Miss that and whoosh, slipsville. I’m considering building a small platform to solve that problem.

I can now ride with a chair or counter, something that I can use to steady myself, next to me. And  I have gotten proficient enough that I can stand and pedal. I have begun working on clipping in and out of the pedals, although I won’t be doing anything close to what this guy does.

What I like about rollers is that I can still ride without going out in inclement weather. It helps conditioning, technique and handling skills. If your pedal stroke isn’t smooth while riding rollers, you’ll know because you’ll bounce around. Sprints, intervals, cadence work, all can be done on rollers. 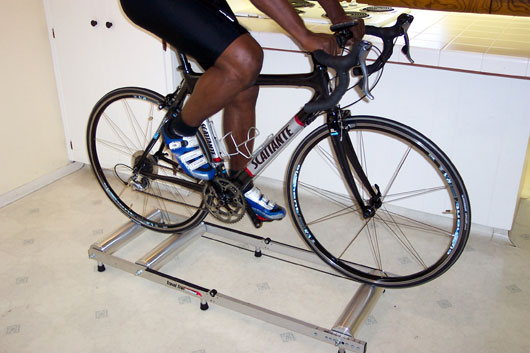 What I don’t like about rollers is that they can be incredibly boring. Even wearing headphones and listening to music or watching television. Then again that just provides more incentive to ride outside once the weather calms. And after a few sessions on the rollers I can do that while working on my handling skills, technique and without losing too much conditioning.

Don also points us to this video by cycling coach Marc Evans, who demonstrates how to ride rollers. 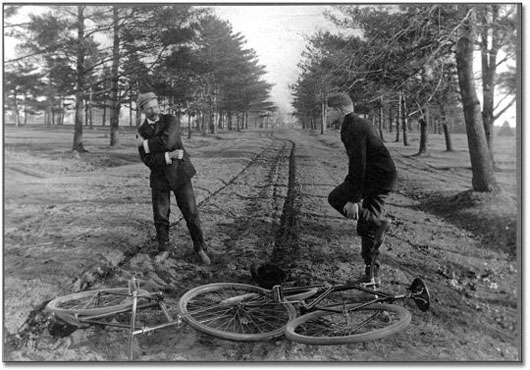 Last summer, I was on a club ride when we approached our turnaround point. We had to get ready to make a left turn into a gas station. We were riding two abreast on the road; I was in front on the right.

The rider next to me was experienced, but unfamiliar with this route.I told him we’d be making a left, and started to ease my bike in that direction.

He didn’t move. I nearly crashed into him. I was looking ahead to the turn, and didn’t see that he wasn’t moving with me. I jerked the handlebar to the right, somehow avoided falling over, and we got to the gas station without a mishap.

I’m thinking about that incident, because I recently came across some data about bike-on-bike crashes.

The Safety Committee of the Twin Cities Bike Club in Minnesota compiles records of crashes involving the club’s members. Each month, they print the crash rundown in their club newsletter. Their January newsletter toted up the crashes for the year: 34. Five of those crashes were bike-on-bike.

We always hear about solo crashes, where bikers lose control and go down, or car-bike crashes, which most often seem to happen when a car turns right in front of a bike. But why would bikes hit other bikes? Isn’t the hazard obvious? Can’t it easily be avoided?

The Twin Cities Bike Club listed causes for four of the five crashes. All were different.

Three of the four somehow involved riders hitting the bike in front of them. All because of different circumstances, but the results were the same — a crash.

So one way to be a safer biker is to pay close attention to the bike in front of you. This is why you always hear warnings against “half-wheeling” in pacelines. That’s when your front wheel overlaps the rear wheel of the rider ahead. I witnessed the results of this when riding my first century. A serious crash on a wide, arrow-straight road.

In fact, it was a bike-on-bike crash that got me wearing a bike helmet. In the 1980s, my wife and I would take our bikes out on the local hike & bike paths in city parks. In one case, the path came down from a bridge over a creek, and merged with the path that ran along the creek. A rider coming down the hill couldn’t hold a tight line, and hit my wife head-on. She had cuts and bruises, some road rash, but was more frightened at the collision itself than the consequences. We went to the closest bike shop and bought helmets right away.

The bike club’s safety column concluded that most accidents — bike-on-bike or otherwise — are caused by inattentiveness.  It urges all bikers to take a Traffic Skills 101 course, which teaches defensive biking techniques.

And here’s something very timely: The League of American Bicyclists is partnering with the city of Houston to offer the classroom part of Traffic Skills 101 online, at bikeed.org. Registration is free. It’ll take about four hours to complete it, but you can take as many or as few modules at a time as you want. There’s a quiz after each module. Once you’ve completed the online part, you’re eligible to take the on-the-road portion. I signed up for the online course tonight, even though I’ve already passed Traffic Skills 101. We can all use a refresher.

Normally I’d be grabbing a little post-ride snack right about now, maybe doing a little stretching. But instead I’m venting, taking out my frustrations on the only thing in sight – my computer.

What’s my problem? The idiot in the white car, that’s my problem. Namely, the idiot who felt the need to stay behind me, while I literally hugged the edge of the road climbing a drawbridge, then for some reason chose to pull alongside me and abruptly lay on the horn. Not a toot-toot, mind you, we’re talking a prolonged blare. I knew the car was there, of course, but the unexpectedness — and the sheer loudness — of the horn startled me.

Me, a guy on a bike, with a cement wall to my right, traffic on my left, already battling 25 mph winds, doing exactly what I was supposed to be doing.

Apparently the guy in the white car was no rocket scientist, so let me give him a little education. Startling a person on a bike isn’t the smartest move you’ll make in life. When startled, most people react with a jerk. (Yes, that term refers to you as well, but I’m referring to a sudden movement in this context). Maybe you liked how I wobbled, and how I had a brief moment of panic. But what if I had gone down? Trust me, moron, my body and bike are no match for your several thousand pound automobile and the surrounding concrete. Maybe you thought it was funny, or that you were making a point for motorists everywhere. But what you were really doing was endangering someone’s life, a move that would have far-reaching effects for both of us.

More to the point, I was in the right, you (substitute name for your favorite feminine hygiene product here). I was staying as far to the right as possible, riding straight and predictable. You had room to pass me, believe it or not, and even more room if you consider that no cars were in the oncoming lane at the moment. But evidently you were just annoyed that a guy on a bike was apparently holding you up.

Obviously I’m preaching to the choir here, but maybe we need to remind our non-riding friends of the law. I’ve got a few who have actually told me how annoyed they are at us bikers on that very same bridge. They seem to think they are in the right, but that’s not always the case.

Here in Florida, state law says you must ride as far to the right as practicable, not as far to the right as possible. That means I’m perfectly entitled to “maintain no less than 2 feet of clearance from the edge of usable pavement to have room to maneuver around obstructions.” Should you, White Car Person, feel the lane is too narrow for both of us to share safely, you need to realize it is me who is entitled to the lane, not you.

Should you feel the need to pass me, and I perfectly understand if you do, you also need to realize that under Florida law, you’re required to give me three feet of clearance. That means you wait until you have a clear road, then you go out and around me. I’ll double check, but I don’t think blaring your horn is part of the deal. Other states with Three Foot laws are Arkansas, Connecticut, New Hampshire, Illinois, Tennessee, Minnesota, Utah, Wisconsin, Arizona, Oklahoma, Colorado, Louisiana, and Maine. (Sorry all you Texans, apparently you don’t have one…yet.)

After our little altercation I did all the wrong things, of course. I called you some very interesting names, then tried to channel Fabian Cancellera so that I could catch you at the next traffic light. That’s not a good idea according to most experts. Had I caught you hopefully I would have calmly explained my side of the situation to help you see things differently, not, shall we say, tooted my own horn.

Of course, I couldn’t ultimately match your speed, and the light wasn’t in my favor. But I did enjoy you checking your rearview mirror when you realized I could actually climb a bridge a little faster than you thought…