When I consider rides I like, it’s easy to overlook the Zoo Ride. That’s because it’s not as long as most of our other marquee rides. But it does have a lot of features that make it worthy of consideration. In fact, our club has an informal “Friday Zoo Ride” that I might be able to join one of these years. In the meantime, I have mostly ridden it by myself.

As the name suggests, the Zoo Ride heads to the Austin Zoo. Our zoo is not in the city, but is several miles west. From our neighborhood, we get a quick taste of the hills that highlight the Zoo Ride. We take an easy climb through one of the newer subdivisions and cross Ranch Road 1826 into an older subdivision with large lots.

We get to zoom down a couple of nice hills here — hills that allow us to easily top 30 mph. Because of the way the route heads, we will not be coming back this way, so we don’t have to climb those hills. On one of our other routes, we do make a return trip through this area, and coming near the end of the ride, the hills can take a toll on worn out riders.

Anyhow, the route takes us across U.S. 290 west of Austin, and on to Circle Drive. This is a nice two-lane road with minimal traffic, although speeds tend to run high. We’re on Circle Drive for less than two miles, though, and then we turn right onto Rawhide Trail, at a sign pointing to the Austin Zoo.

From this point, it’s all downhill. The road twists and turns through typical Hill Country landscapes, rocky ground covered in cedar and live oak. Some suburban-style subdivisions are being built out here, too. With all the sprawl in Austin, we wonder how much longer we’ll have decent biking around here, or whether we’ll have to drive to worthwhile riding areas. I’m afraid it will happen sooner rather than later.

Rawhide Trail takes a jog to the right, and the zoo isn’t too far down. If you decide to go that way, the entrance to the zoo is a short way down. Once past the entrance, you’d never know the zoo is there. Its fences are camouflaged by the heavy brush along the road. At the end of the road is Paisano Ranch, the former home of the late Texas author, J. Frank Dobie. It’s now owned by the University of Texas, and two writers in the graduate school there are awarded fellowships to live and write at the ranch for six-month periods. They can work undistracted, in isolation. However, entrance to the ranch is blocked at this point.

I prefer to jog left near the zoo entrance, on D. Morgan Road. It’s not long — a little over a half mile — but it’s great fun. The road twists and turns, dipping downhill all the way, sometimes steeply, sometimes near level. I have never encountered a motor vehicle on this stretch, although there are entrances to some homes along the way.

Of course, when the road ends at a locked gate, the cyclist has to turn around and head back — and that means a climb of almost a mile and a half. According to Strava, the grade averages only about three percent, but there are spots where it touches 10 or 11 percent — and two little places where it’s 14 and 15 percent. So that short slog can take much longer than the typical 1.4-mile jaunt. 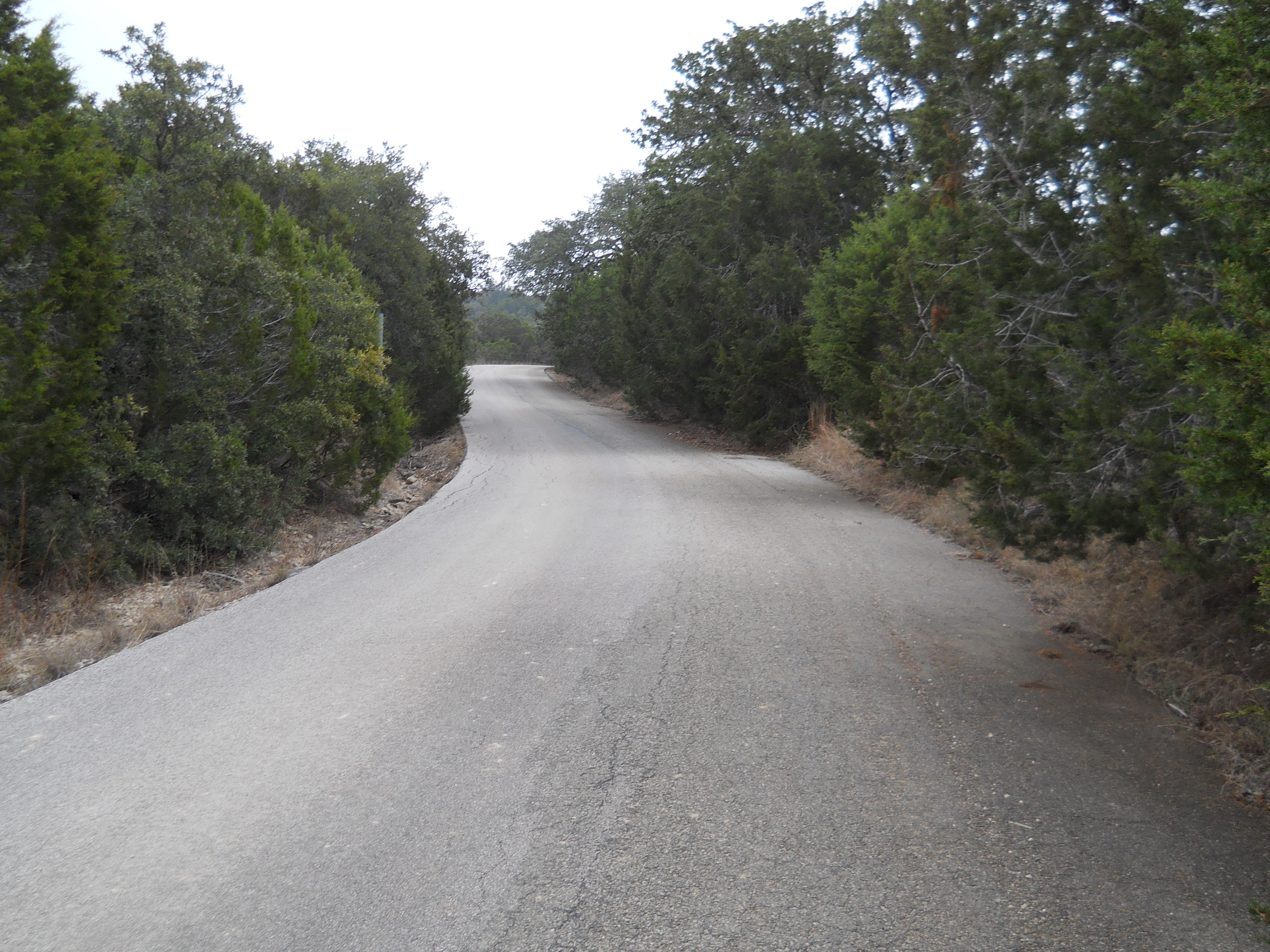 The next leg of the ride takes us over some semi-busy two-lanes, up to Southwest Parkway. Southwest Parkway is a six-lane divided highway with a generous shoulder. It’s very popular with bikers. It hits its high point by the big AMD semiconductor complex, then makes a nice, fast drop down to Travis Country. Travis Country is a nice upscale subdivision with a road circling it. Ridden in a clockwise direction, it’s more downhill than up, so the cyclist gets a nice reprieve after all the ups and downs around the zoo and on Southwest Parkway.

Leaving Travis Country, we take some major arterials again, but the traffic isn’t usually too bad. Our final stretch is along Escarpment Blvd., the main north-south road through our Circle C Ranch subdivision.

In total, the ride is around 25-26 miles. Again, not all that long. But the hills add a bit of challenge to it, and the scenery is a bit different than what we get on our rides to the south and southeast. If I feel like testing myself, the Zoo Ride is a good choice.

As I left the house and headed down the road on a chilly fall morning, I was happy to be getting an early start on the day’s ride, and disappointed that I would miss out on one of my favorites. My friend Debra had posted that she would do a Dripping Springs ride, and invited us to come along.

But I had to finish early, and she wasn’t starting until 10 a.m. While my ride was enjoyable, I knew that hers would have been a lot better — both for the camaraderie and for the scenery.

Dripping Springs is a growing small town about 15 miles west of Austin. When I talk about a Dripping Springs ride, I really mean the network of roads south and west of the town. We start at a minimally-developed park that has a convenient place to park cars. Once we head out, we follow familiar roads for several miles.

A highlight of this stretch is when we make a sharp left turn, and follow a few twists and turns, crossing a creek that sometimes runs over the road. Just past the creek, the road takes a decided upturn, and we have our most challenging hill of the day. It’s not impossible, but it’s a good test of your climbing abilities. However, like most hills around here, it might be steep, but it’s relatively short.

We like to continue for a few more miles, then regroup and figure out where we’re going to go. The nice part about this area is that it has a lot of roads that serve the small ranches out here. The roads are in reasonably good shape, sometimes a bit rough, but traffic is quite light. Most of the folks out here are used to cyclists, and are generally courteous.

The map I’ve posted shows one of our favorite variations: Longhorn Trail.  From our regroup point at the J.D. Ranch, we Follow Mt. Sharp Road past some spectacular views, then turn onto Longhorn Trail. That road features a longish hill, but it’s downhill — and speeds of 35 mph are easy to reach. At the bottom of the hill, the road snakes through the middle of a ranch, and if we’re lucky, the guinea fowl will be out sounding the alarm for approaching bikers. As we go right past the ranch house, which sits next to the road, we might see other critters. Once, a flock of black sheep were along the road. Other times, we’ll see the ubiquitous horses or goats.

After the ranch, we have another choice to make. Longhorn Trail ends at a T intersection with Mt. Gainor Road. If we turn right (south), we can branch off on Ledgerock Road, or turn left onto Mt. Sharp Road. Mt. Sharp is the longer of the two, and takes us almost into Wimberley, another colorful small town. We usually turn back before we hit the town, because traffic gets heavy quickly, and the road has no shoulder.

Mt. Gainor Road will take us back to our starting point, but has its own highlights. One is a steepish downhill that isn’t very long, but ends with a sharp bend to the right, so if the cyclist throws caution to the wind, there’s a good chance of meeting an oncoming vehicle, and not in a good way.

Depending upon which combination of roads we take, our rides can go anywhere from 19 to 27, 33, or 36 miles. We can even combine several of these routes for longer distances, if we want. But typically, we don’t. After we put the bikes back in or on our cars, we head for a local restaurant for a social meal.

Riding a Dripping Springs route gets us out of Austin, into the country. It’s hilly, scenic, with little traffic and okay roads. What more could cyclists want?

I skipped the club ride this morning, because we had a thunderstorm over night, and our little chihuahua needed comforting. By the time I got moving around 10:30, I knew I’d be  riding alone. But that didn’t bother me, since I picked a favorite route of mine: Buda (BYOO-duh).

Buda has nothing to do with the great Hungarian capital. Instead, it is believed to be a corruption of “viuda,” the Spanish word for widow. Someday I’ll have to track down that story. For now, I knew it would perfectly fill the bill for a guy who has been riding little lately. It’s a 30-mile out-and-back, which gives the rider the option of adding distance, or cutting the ride short.

The rides starts out in an east, then south, then east routing. I live in a nice suburban development on the southwest side of Austin, and we are limited in the number of routes we can take to get out of here. So, during the first several miles, we’re riding in stuff like this — nice to live in, but more car-centric than I’d like. 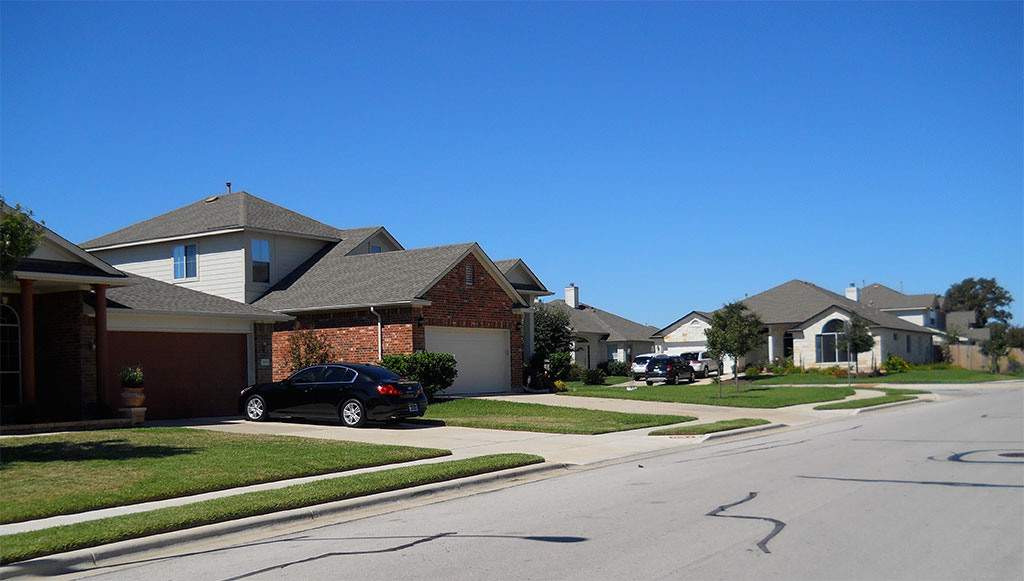 It’s not too long before we hit our first objective: Old San Antonio Road. It’s more downhill than uphill along here, and cyclists can get in some good times. 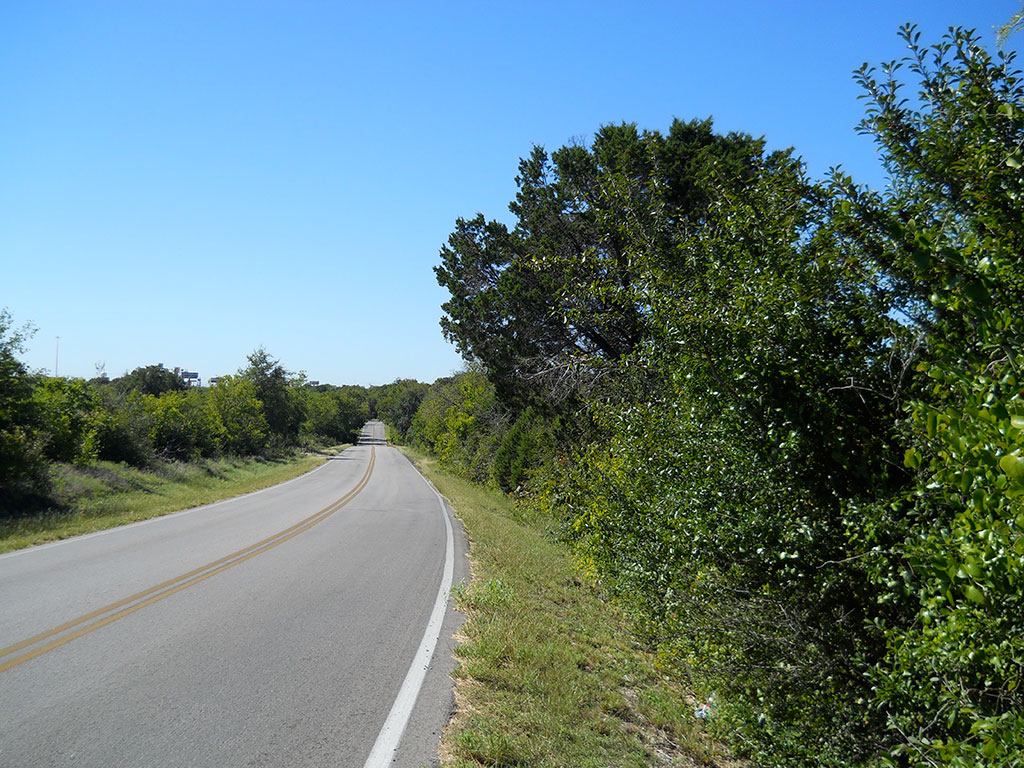 At 15 miles, we’re spit out of Old San Antonio Road onto Main Street. Because we’re still a mile from the business district, we get to pick our way through sprawl development. But people around here are used to bikers, and are generally courteous. 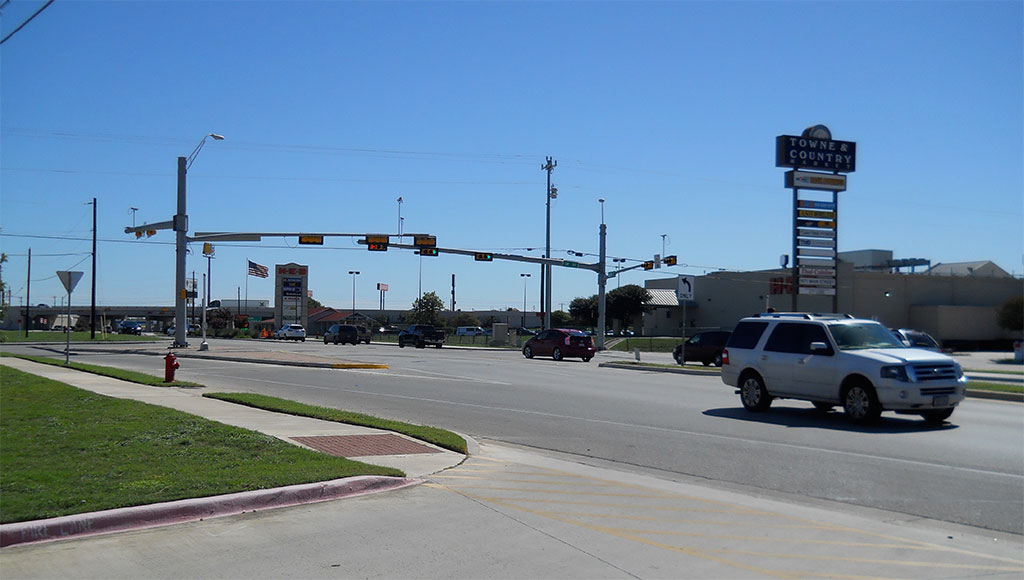 I like to go up to the historic district, and ride the side streets. Here, you can get a sense of what this town was like before the Interstate highway came through. I think the Buda Elementary School is a pleasing building to admire. 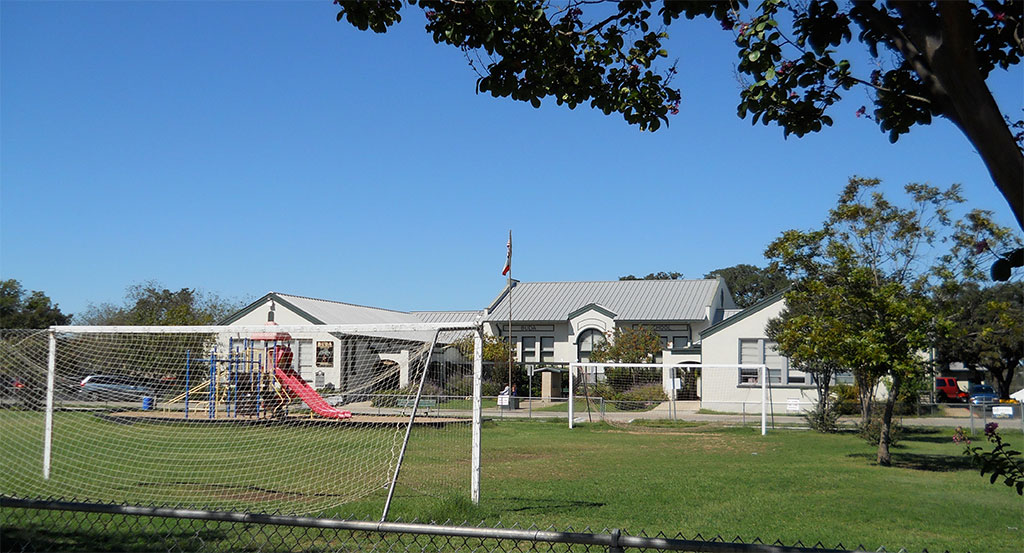 “Downtown” Buda is lively for a city of this size, thanks to the infusion of cash from a huge Cabela’s outdoor shop on the Interstate. Most of the businesses are small restaurants or antique shops. Some attractive public buildings have gone up since then, including a large, clean public restroom — a nice perk for cyclists. 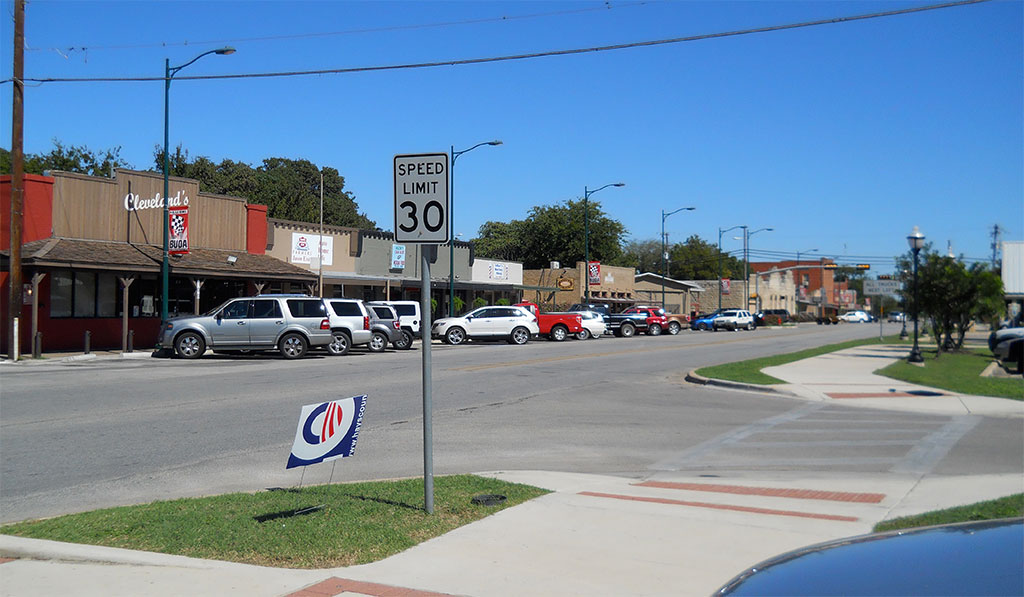 I took a detour through some residential streets, where the little town displays the characteristics of a small farming town — including some nice large old houses that would be at home in a similar place in Iowa. 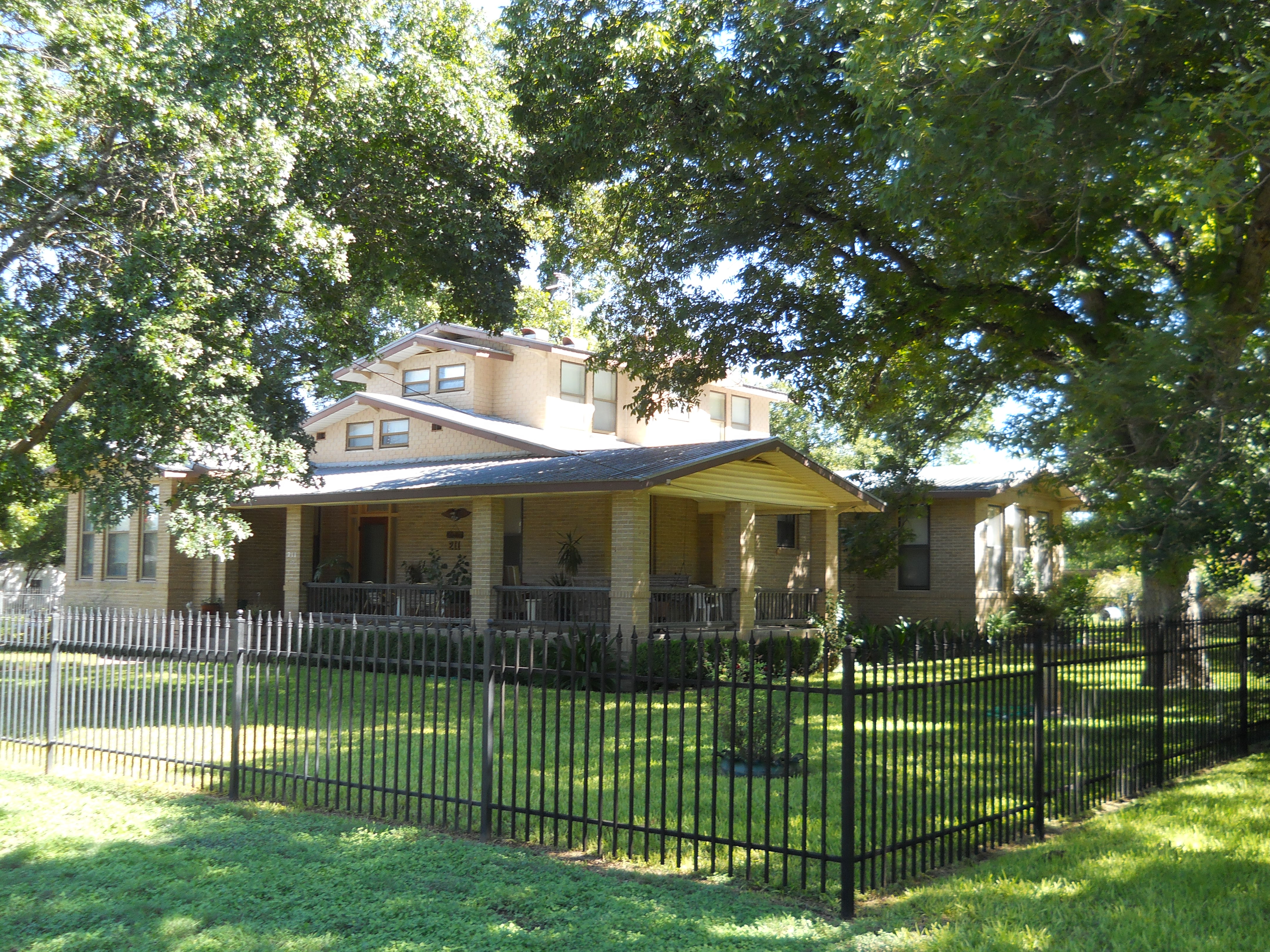 From here, it’s not far to Old San Antonio Road and the return trip. Huge stands of prickly pear cactus dot this road. 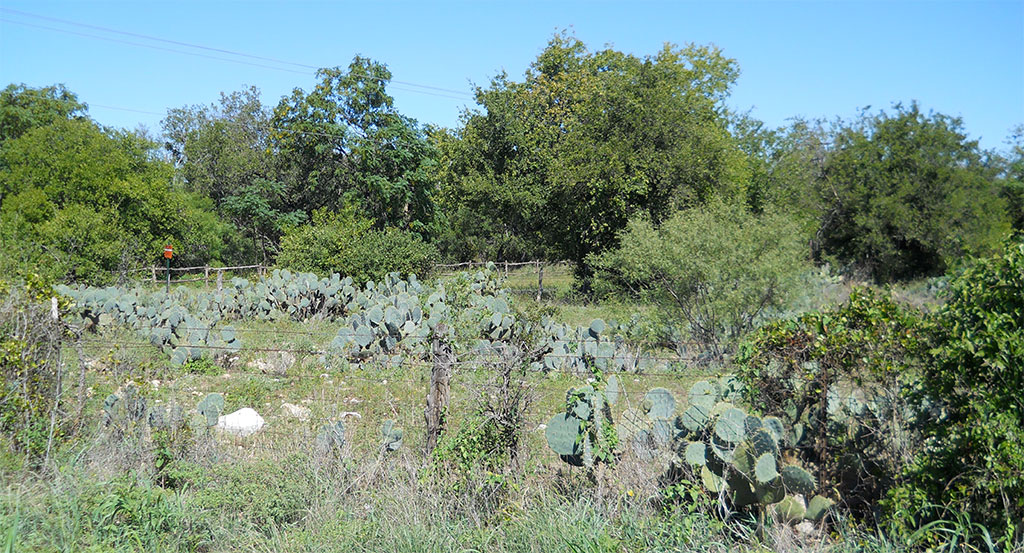 A little over two hours — a little under 15 mph for an average. The ride to Buda is a nice one, and if I’m on my own, it’s likely to be the route I take.