We’re at the end of another year.  Bike-wise, it was a good year for me.  Among my personal highlights:

I’m undecided about where my biking will go in 2011.  Both distance riding and more training appeal to me.  Right now, I’m leaning toward doing more long rides – rides of over 60 miles.

I’m also debating whether to back away somewhat from the social aspect of cycling.  I enjoy riding with friends, and one of the highlights of 2010 was meeting and riding with folks I’d only known online.  But I do most of my riding alone, and I think I enjoy that more.  I look forward to our Sunday morning club rides, but it doesn’t kill me to pass one up.

I do enjoy organized rides, and will probably do more in the new year than I did this year.  I’ve missed lots of good ones in this area, and I’d like to try them out.

But I think the emphasis will be on biking as fun, rather than biking as work.  Best of everything to each of you.

When I got my shoes two years ago (is it that long already?), I made sure to get size 44s, instead of the 42s I normally wear on the street (Yes, speaking metrically makes me feel veddy continental).  The theory is that since my feet swell up during exercise, the extra room in the shoes would keep them from squeezing my feet too tightly, causing hot spots, numbness, and a whole plethora of other bad things that happen to feet on a long bike ride. 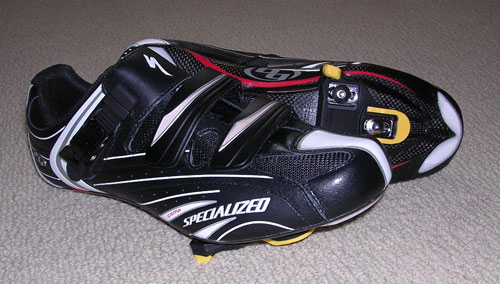 My wife has been complaining about her shoes, too.  She’s had hers even longer than I’ve had mine, and they seem to have served her very well.  Both of use have Specialized shoes, which aren’t cheap.  They have carbon soles, so we get no flex when pedaling hard.  But in warm weather, her feet get pinched, and cause her a lot of discomfort (I’m bringing up warm weather in December, because our winters are pretty mild compared to the rest of you folks, and her most recent complaint about her foot was within the last two weeks).

I bring this up now, because recently I was reading an article — I forget if it was in print or online, but as I recall, it came from a source I regard as reliable — that said you don’t need to allow for extra room.  In fact, it said biking shoes should fit snugly.

About five or six years ago, when I bought my last pair of running shoes (before I stopped running), the sales clerk told me to get a larger than normal size to allow for the swelling my feet would do while exercising.  I did, and they worked out great.  I’ve even started buying street shoes a half size larger than normal.  But since seeing that article, I’m confused.  Should she stick with the shoes she has, and look for other means of relief?  Or should we go shopping for new shoes, and do what I did — get a couple of metric sizes larger?

Readers — what’s your take on this?

My wife tells the story of shopping for the headlight I wanted for Christmas (she couldn’t miss — I left some pretty obvious clues).  She went to the big LBS and told one of the sales guys that she wanted a headlight for me.

“Oh, I don’t know!” she answered.  It was a concept she wasn’t aware of, and we had never discussed.

She called from the car, and asked me.

“Oh, that’s good,” she said, “because the ones to be seen are $40-$50, and the ones to see are over $100.” She wanted to avoid the big-ticket item, because we had agreed to go easy on presents this Christmas. 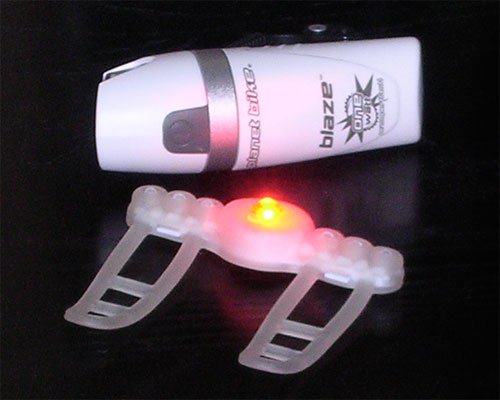 Some impressive light sets can be had for cyclists who really want to light up the night.  Committed nighttime riders often mount two headlights.  The powerful ones can be run by a dyno hub, so just riding the bike will supply power to the light.  Or they’ll have a battery pack that fastens to the bike frame.

But I don’t ride long distances out in the country after dark.  My need for lights is because I get caught in dusk before I can get home from a late afternoon ride.  I want cars to see me on lighted city streets and less well-lighted residential streets.

When the salesman realized what I needed, he recommended a Planet Bike Blaze.  She got me the 1-watt model; a 2-watt model is also available.  While she was at it, she added a bright Serfas light that attaches to the bike’s seat stay.  It has more flash patterns than the cheap taillight I have now, and its steady beam is more prominent, too.

It was our turn to entertain guests for Christmas this year.  They’ve all headed home now.  I’m looking forward to trying out the new lights during the upcoming week.