As I mentioned earlier, one of the bike upgrades my wife made on the advice of her training buddies was to go to clipless pedals. (It’s an unfortunate name, since you wear a special cleat on the sole of your bike shoe that clips into the pedal – but it’s called “clipless” because it is not one of those old-fashioned toe clips that attaches to regular platform pedals.)

After her first ride with the clipless, she raved about her ability to add power to her pedal stroke by pulling up as well as pushing down. Less happy for her was the nagging feeling that she’s permanently attached to the bike. When riding, she’ll try to time upcoming stoplights so she doesn’t have to disengage her cleat at the corner. Instead, she’ll slowly ride up to the light and try to hit it just as it turns green. When she gets home, she pulls the bike onto our lawn to stop and disengage, so that if she falls, she’ll hit soft grass instead of hard concrete.

I was persuaded by her experience that clipless was a necessary addition to my bike. I bought a set from Nashbar, the large online bike shop. They have their own branded pedals, which are cheaper than all others I’ve come across. I had them installed at a local bike shop when the bike was in for other servicing, attached the cleats to my new bike shoes (Exustars – a relatively cheap Chinese brand also sold by Nashbar), and went out to practice. After clipping in and out on both left and right pedals (there – I used “clipping” while talking about “clipless” pedals. It’s awfully hard not to) I went out for a ride on the Veloway – a 3-mile paved bikeway about 3 miles away from my house. They were terrific. I instantly felt that additional pulling power on the upstroke. I can’t prove it, but it felt like I was going faster than usual. I returned home feeling good about the purchase. 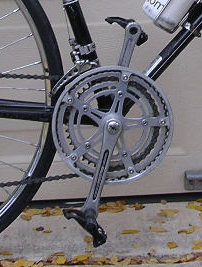 Two views of the clipless pedals on my bike.

Then, I turned into my driveway, slowed, tried to disengage – and did the famous “clipless fall.” That’s what happens when you don’t twist your heel out to the side firmly enough, and the cleat doesn’t come loose from the pedal. Still attached to the bike with both feet, you feel yourself slowly tipping over, past the point of recovering your balance, and wind up on your side on the driveway, still straddling the bike. By then, the cleat has come out of the pedal. Swell. On the plus side, since your speed is zero, the road rash (or “driveway rash”) is not as severe as if you fell out on the road.

Since then, I’ve had only one more clipless fall, (edit: make that two) and have learned that it’s a rite of passage all new clipless riders have to go through. I guess with only two to my name, I’m doing better than a lot of cyclists. I’ve become more adept at disengaging, and am diligent about doing it as I approach stoplights. My remaining clipless problem has to do with clipping back in once I get the green light. I can never seem to get the pedal in the right position. As the picture shows, its normal resting position is with the rear down, toe up. The trick is to guide your toe over the pedal, which pushes it forward, and allows the cleat to click in. it’s a trick that takes practice, and I’m still not good at it. As one biking acquaintance said, “Practice, practice, practice.”