So how was it that I decided to get into biking, after never really considering it much before?

She’s president of a professional organization that sponsors a local charity ride, and figured that as president, she’d better be a visible participant in the project. It’s a well-organized ride, and provides training rides four months before the event. They start small, and work up to substantial mileage.

At the beginning, six-mile rides left her huffing and puffing. By the month of the ride, they were after work pick-me-ups. On the weekends prior to the ride, she rode 25, 28 and 28 miles.

The effort is all the more impressive because of her bike. She rides a 15-year-old Trek hybrid. It’s heavy and slow. But she learned a lot during the training rides. She bought padded bike shorts and a jersey, and a friend “demanded” that she ditch the styrofoam helmet she owned since the early ’90s. The ride trainers also suggested she swap the knobby tires on the hybrid for narrower, smoother tires. And last but not least, she got clipless pedals and real bike shoes.

Her sister came down from Dallas to be at the finish, and the two of us drove out to the park where the riders would come in. On a narrow county road just before the park, there she was – her red biking jersey really stood out. But she was walking her bike, not riding. We pulled up alongside, and she told us she had fallen at a water crossing a few hundred yards back. She couldn’t disengage her pedal cleat fast enough as she approached the water, and went down. Injuries were minor–a few bruises and some “road rash,” and as we pulled our car into the parking area, we could see her get back up on her bike for the finish. We parked the car, grabbed the camera, and hurried to the finish line, but by the time we got there, she was already in the finishing chute with a big smile on her face. 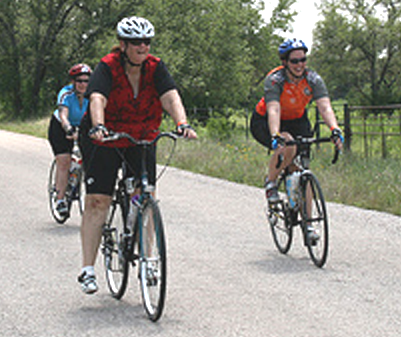 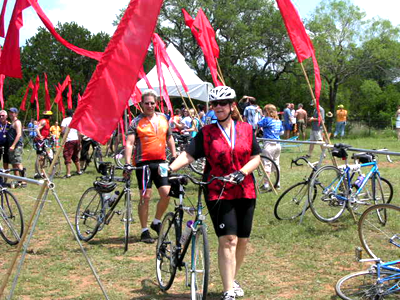 In the finishing chute. Her friend and ad hoc trainer, Scott, is right behind.

The ride was undoubtedly the most athletic thing this middle-aged woman had ever done in her life, and it left her with a great sense of accomplishment. It also proved to me that with a little effort, I could get there, too.