I live in Austin, Texas, which has many opportunities for biking. In the southwest corner of the city, where I live, it doesn’t take long to get out to some lightly-traveled country roads. Austin sits right on the boundary between mostly flat prairie to the east, and the Texas Hill Country to the west.

But one of the best rides around isn’t out in the country. It’s the Veloway, a track built especially for bikes (and inline skaters).

The Veloway was built as part of a metro park. It’s a paved asphalt road, running 3.1 miles in southwest Austin, near the intersection of Mopac Expressway and LaCrosse. It’s right across the street from the Lady Bird Johnson Wildflower Center.

Bikes entering the Veloway must cross a gravel parking lot (It’s the only place on the trip where you have to watch for nasties that can puncture your tires). You steer between a gate and a large rock, and you’re on the track. It runs in a clockwise direction overall, but has plenty of left turns, too. Once you’re on the Veloway, watch out for riders coming around from the right for another lap. Ease out onto the track, and find your pedaling rhythm. The first part of the ride is mostly flat, with a slight rise leading to a right-hand sweeping curve, which then lets you build speed as you hit a slight downhill. At the bottom of the slight slope, you have a fast left curve. You’ll probably be over 20 mph at this point. Then the track starts to rise almost imperceptibly, except that your legs can feel the increased resistance, and you have to downshift two, or three, or even more times to handle the upward slope. 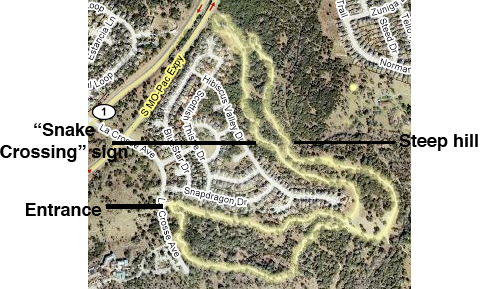 The pale yellow line traces the route of the Veloway.

Then you get to a welcome landmark, the “Caution – Snake Crossing” sign (I’ve never seen any snakes use the marked crossing, although you can bet they’re lurking back in the underbrush). It’s welcome, because after a right curve, there’s a sharp left turn leading up a short hill, and then it’s downhill. Start pumping hard, shift into your highest gear, and go. You’ll be up around 25 mph or higher, but then you have to deal with a 180-degree hairpin turn. Downshift, go wide, turn into the apex, and accelerate out. You can pass folks here who took the hairpin cautiously. Then you power into a wide left turn, another 180-degree bend, and accelerate through a flat stretch to the next hairpin. You’ll come out of that into a fast, flat section which ends with an abrupt, short but steep hill. Downshift, hit the hill, stand up on the pedals, and you’re at the top.

A fast, flat section leads you back to the same route you took on the way out, but your route bears left, into another barely noticeable upslope. Fast downhill esses bring you to another rising incline, and the speed really scrubs off here. But at the top, you build speed to take a quick right, a quicker left, and an  even quicker right, which leads to the last brief uphill before you arrive at the parking lot and the entrance to the Veloway. My favorite ride is 2.8 miles from the house to the Veloway, three laps around the track, then back home. It’s just under 15 miles total, and takes just under an hour.

As you might expect, all kinds of bikers use the Veloway. It’s a popular place for parents to bring their kids, because it’s safe, and away from traffic. Plenty of adults on mountain bikes and hybrids like it, because it’s an easy and challenging ride all at the same time. Hammerheads in full racing kit run practice laps there, and you’ll find plenty of weekend warriors in biking clothes, too. Despite all that, it’s rarely crowded. Weekend mornings seem to see the heaviest use. Even then, you’ll never find yourself in a crowd. The Veloway is Austin’s cycling jewel. It would be great to have one or two more, so this biking experience would be easily accessible from all over the city.