My wife and I had agreed that my birthday present this year would be a new bike. I was just getting tired of pushing around the heavy Raleigh. My problem, though, was to figure out just what kind of bike to get.

Carbon would be interesting. But carbon bikes start around $2,000, and I couldn’t make myself spend that kind of money on a bike. I’ve been at it for less than a year, and what if I fall out of love with biking, and give it up in six more months?

Do I look at components, and go for the best I can buy within my budget? That’s not a bad idea, but it soon became clear that for $1,500 or less, which was my self-imposed price point, I’d be getting Shimano 105 derailleurs and shifters – the middle ground of Shimano’s line.

How about geometry? I’m in my 50s, and the old Raleigh stretched me out more than I wanted. The new, more upright geometry with sloping top tubes – “compact geometry” – might be the way to go.

Then there’s fit. Much of the information I’ve seen over the past several months argues that all those other things really don’t matter if the bike is a bad fit. It was also obvious that on my budget, I could get a lot more bike if I bought it online, from one of several companies that offer great deals. I’d have to do a small amount of assembly work myself, but I’d get a heckuva bike for the price. But I’m all thumbs, and those who advised to get a bike from a local bike shop (LBS) made sense. You pay a premium for service, fitting, and free tuneups for a year, but it’s worth it.

Okay. LBS, compact geometry, $1,500 limit. What to buy? My first target was the Specialized Roubaix, which has gotten a lot of good press since its introduction some years ago. But they started at about $1,600, and with the extras I planned to get, that just wouldn’t work. Specialized has a more entry-level road bike, the Allez, with basic components like Shimano Sora. Jamis and Felt offer bikes that have a nice combination of components at a decent price. Trek has two models that interested me – the Pilot, which is all about upright geometry, and the 2.3 – also featuring a compact frame, but with more emphasis on speed than comfort.

Bicycle Sport Shop in Austin stocks both Specialized and Trek. But it turns out they’ve dropped Trek’s aluminum frames, and only handle carbon. The choice, then, was easy. 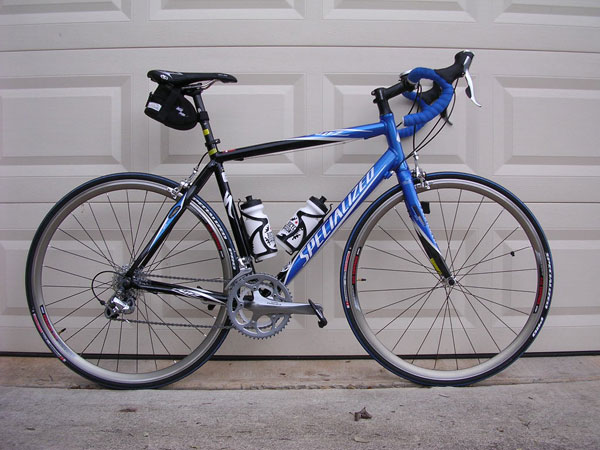 I picked the Specialized Allez Elite. Shimano 105 rear derailleur, Tiagra front. Compact crank, with 50 and 34 tooth sprockets. Compared to the Raleigh, light as a feather. Some of the other components are low end. I added two water bottle cages, a seat bag, and Shimano SPD-SL clipless pedals. The salesperson agreed to swap out the standard white saddle for a black one at no extra charge. Once the shop had mounted all the accessories, it was time to be fitted.

She put the bike on a trainer, and had me put on my bike shoes and get on. Once I started pedaling, she looked at my riding angle and leg extension. I stopped, and she held up a large clear plastic angle finder to my leg. We were trying to get a 35-degree bend in my leg at the bottom of the pedal stroke. She raised the seat a bit. I pedaled some more. She had me stop with the pedals at nine o’clock and three o’clock, and dropped a plumb bob from my forward knee. “This bike was made for you,” she said – no changes necessary there.

I got the bike home, changed into my cycling clothes, and took it out to the Veloway for a shakedown cruise. Verdict: I’m going to like this bike.