The question arises periodically, on Bike Forums, in my club’s Yahoo! group, and just in chats among fellow bikers: Do you use chamois cream?

This is goo you rub into the chamois of your riding shorts or tights. The chamois (SHAM-ee) is the pad that cushions your tender bits against the rub of the saddle. It used to be leather, but is now made of synthetic fabric, but still retains the old name. Some people like to smear a liberal dose of the cream directly on themselves, as well.

The big names are Assos cream and Chamois Butt’r. We’ve had a couple of jars of Assos cream, and like it. There are drawbacks to the Assos product, though. One is that it uses menthol. Once you come into contact with it, your bottom will tingle for awhile until your attention turns to the road. The other is price. It’s $17 a jar! You go through it pretty fast. I stopped buying it for that reason.

Chamois Butt’r comes in a sort of squeeze tube. It’s not mentholated. Price runs about $14-15. This is what we’re using now, but we’re still experimenting. So far, I’m happy with this product.

Performance Bike has its own name brand of chamois cream, as does its corporate cousin, Nashbar. The Performance cream goes for $8.99, Nashbar’s $7.99. Then there’s Body Glide, Queen Helene’s Cocoa butter, and even Vaseline. 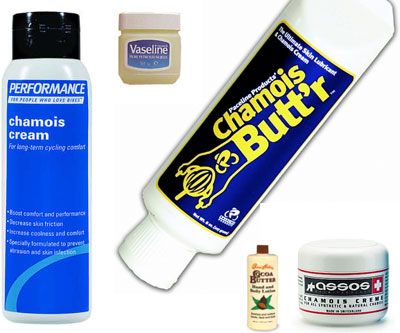 We’ve got some of the Performance stuff, which seems a bit thinner than the Chamois Butt’r. Seems to work fine, though. Haven’t tried the rest yet.

Is chamois cream really necessary? I used to diligently apply it before every ride — even short 6-8 mile jaunts in the morning before work. I’ve come to believe it’s not needed on those short rides. Now, I won’t use it unless I know I’ll be out for more than an hour. I’m aware of plenty of riders who don’t use it at all.

Some sensible advice I’ve seen recently is to pay attention to the fit of your saddle, the fit of your shorts, the quality of your chamois — and maybe on long rides to hit the restroom of a convenience store along the way and wash yourself off. Then, you might not need to mess with creams at all.