When I first started biking last summer, one of the big irritations was the sweat that kept dripping off my brow and into my eyes. Then I rode with an experienced biker friend, who tied a bandana around his head as a sweatband. I tried one on my very next ride, and I was hooked.

The bandana was easy, quick, and available. I had a good half-dozen tucked away in a drawer. Most are the old-fashioned red ones with the black and white pattern. One is similar, but purple. One was issued by a local building supply chain, and has logos of all the brands they carry. The newest one was pilfered from my dog, who wore it at Christmas a couple of years ago. Its pattern is red chili peppers. 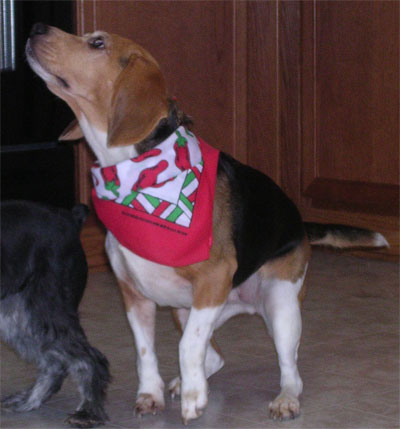 Emily the beagle and her (now my) chili pepper bandana.

I was hooked because the bandana worked. No sweat in my eyes. None even on the brow. Loved it. There’s only one problem: because they’re rather thin cotton, they absorb moisture quickly. At the end of an hour’s ride, my bandana is saturated. Not a big deal, because the ride is over. But after an hour and a half, or two hours, it’s dripping again. I suppose I could pull it off at a rest stop and wring it out — and I have. But that got me wondering: Is there a better solution?

The local bike shops have several alternatives. One is a full skull cover, that you tie behind your head. It has a sweat band sewn into the bottom hem. If you wear it, you look like a pirate, until you put your helmet on over it. Or, there’s just a plain headband that’s got some elastic for stretchiness. These things run from $10-$17, altho there do seem to be some you can get for as little as $5. Should I stick with the bandana, or try something new? Or do you have a different idea?