Flipping through the Nashbar catalog the other day, I was struck by the variety of bicycle helmets out there. Not only are there a lot of them, but some are really pricey.

Back in the early ‘90s, when we lived in Rochester, Minnesota, my wife Pat and I decided to do some bike rides on the paved bicycle trails in the area. (These were converted from abandoned rail lines. They were mostly flat, and covered between 12-25 miles, so a round trip could amount to some decent mileage.) The helmets sold then were Styrofoam, with a fabric cover. I always thought they looked pretty good.

Rhode Gear styrofoam helmets from a 1990s advertising poster.
We both had the one with the blue cover.

When Pat took up biking again last year, she dug out the old helmet. But now, Styrofoam was passé. A biking friend told her she had to get a new, plastic, streamlined helmet—or they couldn’t be seen together any longer. So she did. Paid about $35 for a Bell Solar. She liked the streamlined styling, and the nifty dial-in fit system. 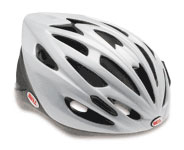 Not to be outdone, I figured I’d get rid of my Styrofoam lid, too. But being the tightwad I am, I headed not to the LBS, but to a local discount sporting goods store. They had several different kinds. I saw that some were by Bell, so I got the Adrenaline model, for about $18.

It didn’t have the dial-in fit system, but I was satisfied with the adjustable fitting strap in the back. And way more vent holes than the old helmet had (but not as many as Pat’s). Plus, it came with a snap-on visor. I immediately took the visor off, because I’d read somewhere that they look dorky. Then, I saw a picture of myself in the helmet. Now who’s a dork? The visor went back on the same day. (I once heard a bicycle helmet described as a birth control device. Yeah, I can see it.) 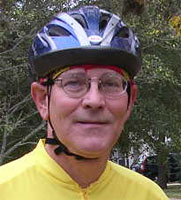 Less dorky if I put on the visor?

Both of us are happy with these low-end helmets. Both meet Consumer Product Safety Commission (CPSC) standards, so they should be able to protect us in a crash. Given that, and the decent fit, why pay $100, $150, even over $200 for a bike helmet? You’re supposed to replace them in five years anyway.