Pat is getting close to wrapping up her training for the Hill Country Ride for AIDS, which is this coming Saturday. One conclusion she’s reached this year is that the heavy old hybrid she rides needs to be replaced.

She’s not ready to take the plunge just yet. She wants to ride the Ride on the bike she’s been used to. But once it’s all over, she’ll be ready to scope out something new.

The other day we were at the LBS, to get some adjustments made to her bike, and to stock up on stuff we’ve run low on, like bum cream. While we were at it, she suggested we look at some bikes, just to see what the possibilities are.

She liked the Specialized Sequoia, with its kind of upright riding position (for a road bike). The price is OK, and she likes the added brake levers on the bars, rather than just those on the hoods. She wasn’t fired up about the Specialized Ruby and Dolce, two WSD bikes. Then we asked to see some flat bar road bikes.

The salesman showed us the Trek FX 7.5. She raved about it. The handlebar was comfortably familiar, and the brake levers were right there. The brakes themselves are cantilever, in the hybrid style, which added to the familiarity of the bike. It had 700C x 32 tires, which offered a feeling of security. Priced well under $1,000. Then, he pointed out the Trek FX 7.6. A real step up from the 7.5. Carbon fiber seat stays and seat post, Shimano 105 rear derailleur, skinny tires, lighter wheels. She got on each of them, asked about modifying them to raise the handlebar to a more upright position, but turned down the offer of a test ride, since she didn’t plan on buying a bike right away. 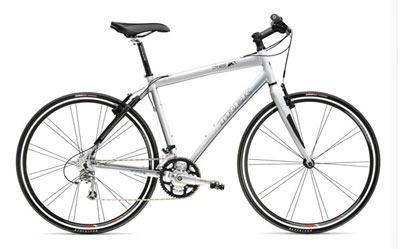 I was impressed with the bikes. I had never considered anything other than a traditional road bike, so I was unfamiliar with these. I knew they could be fast, because I remembered being smoked on the Veloway by a guy on a Cannondale flat bar last summer. As riding in a road bike position becomes less comfortable for me, now that I am of a certain age, a switch to a bike like these might be worth some thought.