I wrote some weeks back about tracking my rides — keeping stats on distance, time, speed, etc. One reader suggested it would be easier with a cyclocomputer. I agree, which is why I’ve had one since the beginning of the year.

As you might have discerned by now, if you’ve read more than a few posts on this blog, I’m a tightwad miser frugal sort of person. When I considered which computer to buy, I glanced at the Garmin GPS gizmos, but decided that several hundred dollars was a lot more than I wanted to spend. I must admit that they do cool things, though. One acquaintance used his to post a map of his ride, and you could trace the route in motion. Altitude profiles are nifty, too. But I decided that what I really needed in a cyclocomputer was something that would register my speed, distance and time of the ride. Anything else would be a bonus. 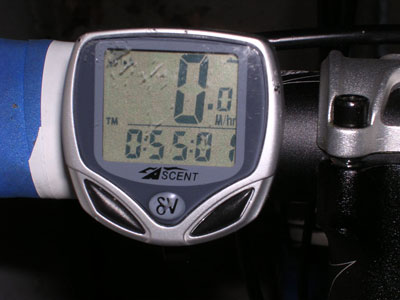 The Ascent Delta V. The ride this day lasted 55 minutes and one second. The scratches on the face are from flipping the bike over without taking the unit off.

I decided on the Delta V, by Ascent. Picked one up at the local Performance store just after Christmas for around $25. It’s a small little unit, about the size of a silver dollar (remember those?) and mounted on the bike with a pair of zip ties. I was attracted to the unit because it’s wireless, and while that raised some dependability questions in my mind, I figured for the price, what the heck. Performance has a liberal return policy if it didn’t work out.

When the computer is first turned on, it has to be set for the diameter of your front wheel and tire. Hold down both buttons, and four digits flash. Starting with the digit on the far right, you click the right button for each time you want the number to advance. Ascent’s instruction manual says for a 700C x 23 tire like mine, the numbers should be 2096.

Another way to determine the setting is to figure the circumference of the front tire. I turned it until the presta valve was at its lowest point, and drew a pencil line on the garage floor at that point. Then, I pushed the bike forward for one full turn of the tire, and drew another pencil line opposite the presta valve. I measured the distance between the two lines. Eighty-three-something inches. You then multiply that number by 25.4 to get the metric figure. I got 2095.5. I figured the one-half a thing off wouldn’t make too much difference.

Well, it apparently made some difference. My trip from home to the Veloway, three laps around, then back home again measures 14.9 miles, when mapped on Map My Ride or similar programs. On the Delta V, it’s more like 14.7. Still, two-tenths of a mile difference over about 15 miles isn’t too bad. I guess.

It’s supposed to have a clock, and does, but it defaults to 12:00 at the beginning of a ride. The instructions say I can set it to real time, but I haven’t figured out how to do that yet. That’s not all that important, since it does clock the time of the ride, which is what I’m most interested in anyway. That, and average speed, which it measures. During the ride, I can set it to “scan,” or read all the numbers in progression: first distance, then maximum speed, average speed, and time. I don’t deliberately try to push up maximum speed, but it’s fun to chart. The max speed reading has a glitch, tho. On my long ride last weekend, it reported my maximum at 63.7 mph. Now, I like to think that I’m getting faster, but even I know my top that day was no more than 30.

When the ride is over, I take the computer off the bike, and enter its numbers into a spreadsheet I keep. (Except for a ridiculously high max like today’s.) So far, I’m satisfied with the computer. I know you get what you pay for, and I got a very basic model. If I can figure out how to adjust it so its mileage matches my mapped GPS mileage, this will turn out to be all the computer I need.