Since the purpose of this blog is to share my experiences as I get into cycling, with the hope that others new to the sport might get something out of them, I thought it might be worthwhile to take a look at some books targeted at the newbie cyclist. I only have a few on my bookshelf — most of what I know about cycling I learned from the fine posters to Bike Forums and other biking blogs — but I’ll briefly review the ones I have and add reviews to other books as those books come to my attention. 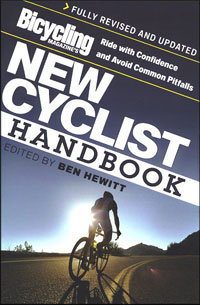 The first in this series of reviews is Bicycling Magazines’ New Cyclist Handbook, edited by Ben Hewitt, Rodale Press, 2005. It’s an update of an earlier version that came out in 2000. Why a three-year-old book? It’s widely available in bookstores, and is likely to be a candidate for selection by a new rider looking for fast info. That’s how I wound up with it.

The Table of Contents indicates that the book will address major issues faced by new cyclists. The book is broken up into six parts: The Bike, The Body, Skills & Techniques, Getting Good (training), Body Care, and Bicycle Care. The chapters within those parts deal with specific topics in a bit more detail. Not exhaustive detail, because many of the chapters seem to be adapted from — or are outright reprints from — articles that have appeared over the years in Bicycling Magazine. Editor Hewitt suggests in the Introduction that the reader take a look at only one or two chapters at a time, and let them sink in while going for a ride.

I found some of the chapters to be worth revisiting several times. The “Getting Good” part has a chapter called “Instant Improvement” — little things a cyclist can do to become more efficient. “Training for a Century” has two versions of a training plan: One for those who just want to survive the 100 miles, and another for those who want to thrive on it. Other chapters were too elementary to spend any real time with, such as “Choose the Right Bike” — it’s likely the reader already has a bike, and just wants to get better riding it — and “Clothing and Accessories” (mostly accessories).

In today’s Internet age, everything in this book can be found online, usually in better detail. Much of it can be found on Bicycling’s own excellent web site, Bicycling.com. In fact, if you visit their home page today, you’ll find links to articles on Ten Cycling Tips Every Cyclist Needs to Know, Bike Buying Tips, and Training Tips — the same kinds of info in the book.

So why even bother buying the book? For me, sometimes having a reference in my hands is important. I’m of a generation that likes to sit back in an easy chair and read, rather than hunch over a computer keyboard and search. For that reason alone, the New Cyclist Handbook could be a useful addition to your bookshelf.