I like to fiddle with interactive web sites, and several months ago I discovered ride mapping sites. Based on satellite visual technology, the sites let you draw maps of your favorite rides. They display cumulative mileage as you go, so you know to the hundredth of a mile how long your ride is (and can compare that distance to the readout on your cyclocomputer).

Because many of these sites are available, I thought it would be worthwhile to compare some of the better-known ones.

I was a fan of Route Slip. But Route Slip was bought awhile ago by Map My Ride, and all of the Route Slip accounts have been transferred over to Map My Ride accounts. Map My Ride is loaded with features Route Slip didn’t have, such as a training log that lets you keep track of your riding efforts.

Like many other mapping sites, Map My Ride is based on Google Maps and Google Earth. You can view your ride in either map or satellite view, or select a hybrid, combining both views.

These pictures show the map view. You can zoom in for a closer view of the route. As you draw the route, little mileage markers pop up every five miles, so you can get a sense of where you might be on the ride at a given time. 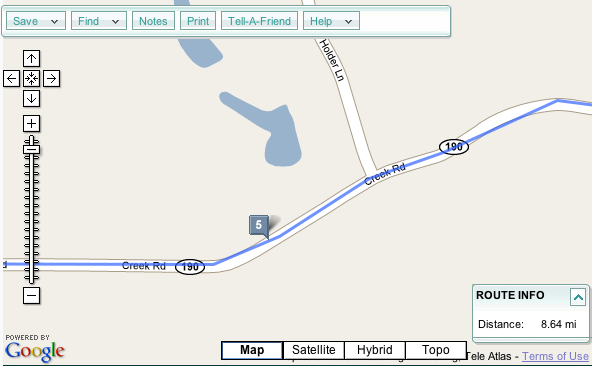 All you have to do to create a ride map like this is to click on your starting point, then use your mouse to follow the road you take, and click periodically. If the road twists and turns, you’ll have a lot of clicks. If it’s straight, you might be able to get by with just a few clicks. Once you’ve finished mapping a ride, save it. It will be saved on the ride mapping company’s web site, and you can go back and retrieve it whenever you wish. So can anyone else.

That’s one of the cool things about these programs — you can search a given area to find rides that you might want to try on your own. In some cases, you are allowed to save maps privately — that is, keep them to yourself. In most cases, you save them to the closest city, and they are available for anyone to access.

Map My Ride put me off at first, because its window is much smaller than those of comparable programs. However, you have the option to click on “View Full Screen,” which removes that objection.

Bikely.com is another popular destination. Another Google maps site, Bikely allows you to search for bike routes, and then take a tour of the route from its starting place, denoted by the green symbol in the picture below: 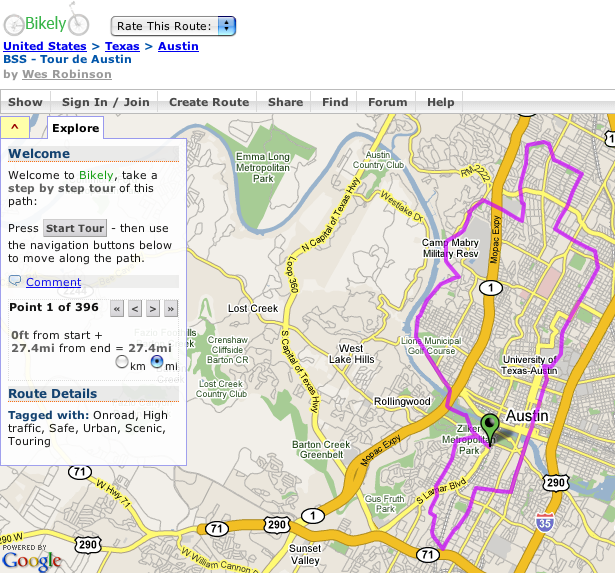 The route is the “BSS (Bicycle Sports Shop) Tour de Austin.” The route details in the inset window give you an idea of what the route is like.

Bikely allows you to save routes as private, or make them public. This is a nice feature, because most of my routes start from my house, and I really don’t want them to be out there for any whacko to see. You do have to be careful when drawing a route, tho, that the “Auto-follow the road” button is unchecked. Bikely will follow the road you’re on, which means you don’t have to click your way through turns, but sometimes it goes off on its own, following a different road than you had planned. You can always undo the last leg drawn, tho, so if you have the patience, this feature may work for you.

My first exposure to these things was on a site called Runningmap.com. I went away from it as I discovered others, but revisited it while researching this post. I’m very impressed with it. Runningmap is so named because it started as a site for runners to map their runs. It’s just as good for bike routes, tho. Runningmap uses Yahoo maps rather than Google maps, so you get a different look. I like the detail to these maps — after you’ve saved them, mileage markers appear at each point you clicked to build the map.

Distance accuracy might be questionable. For example, one route I had mapped on Map My Ride is 22.67 miles. But on Runningmap, it’s 21.88 miles. That may be because I hugged the edge of the road on Runningmap, and over the course of 20-plus miles, shaved off 8 tenths. Still, I think that’s a lot, almost a mile. But another route that came out to 19.35 miles on Map My Ride showed only .1 mile difference on Runningmap.

Cyclists who use Garmin GPS cyclocomputers can download their data to Motionbased, which can massage it to show even more cool stuff. Motionbased lets you simulate rides based on elevation profile and maps, and check your heart rate and cadence at points along the route. You can break out data for uphills, downhills and flats. You can break out distance, speed, cadence, heart rate, and elevation in tables and charts. There’s enough info there to make your head spin. I don’t use GPS, and my combination of mapping sites and a basic cyclocomputer don’t give me near the information I could get at Motionbased.

There are lots of mapping sites, and I know it comes down to a matter of personal preference. Veloroutes.org, cyclistnexus.com, gmap-pedometer.com, and RoadBikeRides.com all work from the same basic Google map template, but each has its own unique features that make it different from the other sites. Some of these sites are evolving into social networking sites. On Road Bike Rides, you can “friend” other cyclists, upload photos and videos to go along with the routes you share, and accumulate points toward prizes.

I just want a place to store my rides, not a biking-oriented MySpace. So which one do I use? Well, I’m using Map My Ride by default, because I had been a Route Slip user and woke up one morning to find that I was now a Map My Ride user. It’s fine, but after poking around on some of these other sites, I might try something new. Runningmap, back where I started with ride mapping, may very well be where I wind up.