One thing I learned for certain after today’s ride — I’m getting better at this.

Today, I did my first organized ride since November. The Armadillo Hill Country Classic, the premier event of the Austin Cycling Association (ACA), follows some nice country roads northwest of Austin. Routes on the ride varied from a 14-mile family ride to 105 miles. I picked the 51-mile route.

Many riders, myself included, were concerned about the weather conditions we could run into. The forecast called for a high in the mid-90s. When I got up at 5:30 a.m., it was already 75. It was not looking to be a good day for biking. But luck was with us. A low cloud deck kept things overcast through most of the morning. At the start, a cool breeze kicked up. As it turned out, weather was not an issue on the ride.

It was a treat for me to make contact with a couple of Austin-area bike bloggers. Mike and Jared both turned out for the ride, and I was able to at least put faces with names. They’re both stronger riders than I am, and we never did get to rendezvous after the ride. I hope we can in the future. 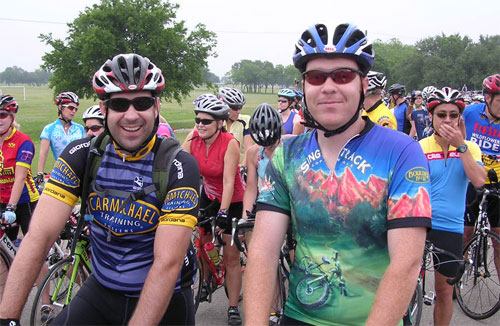 ACA organizers were pleased that about 930 people preregistered for the ride. Add to that the riders who registered on site this morning, and the total number topped one thousand. That made for a dicey start. The 105- and 80-milers set off first, but the rest of us followed on their heels right away. Bikers took up most of the road that led from the high school to the heart of Liberty Hill (pop. 1400), and then strung out as the route hit lightly trafficked country roads. 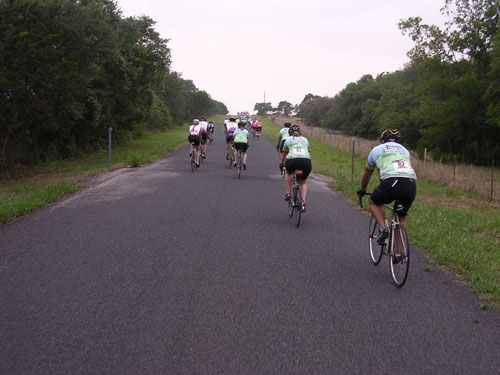 The pack tackles another gentle, but long, uphill grade.

The route followed almost the same route as the Rip Roarin’ Ride last fall. It gave me a chance to compare my performance then and now. I was pleased to find that this time, the ride was relatively easy. The new bike made a huge difference. Roads I struggled on last year posed relatively little trouble this time around.

One of my favorite rest stops is Number 2, which we actually get to stop at both out and back. Besides friendly folks from the Liberty Hill Lions Club staffing the stop, it’s on the grounds of the Stock Tank General Store, which adds some Texas color to the ride. 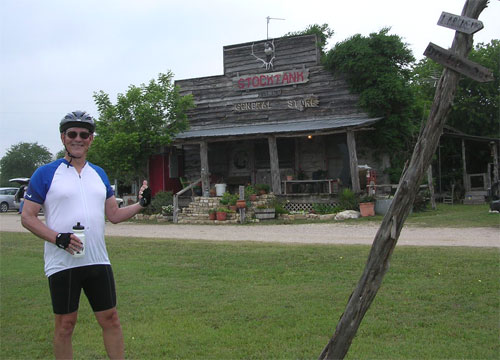 Yours truly at the Stock Tank General Store. “Ah think ah’ll mosey in an’ git me a sarsparilla.”

Actually, there’s lots of Texas color on the ride. A couple of examples: 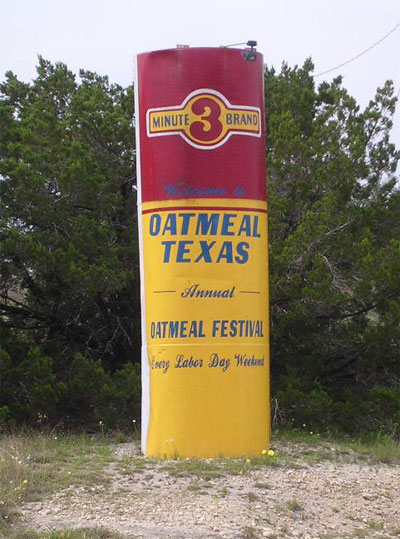 It’s a real place. But if you blink, you’ll miss it. 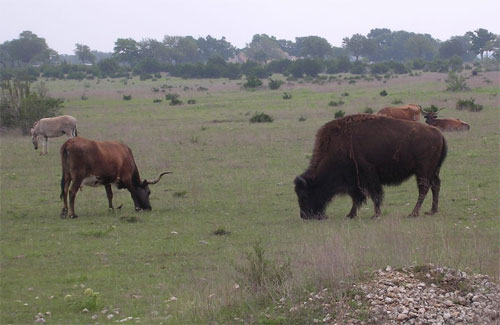 A donkey and a buffalo shared some pasture with a herd of longhorn cattle.

At the last rest stop of the ride, I ran into Gilbert Martinez, a co-worker of mine who is the Vice President of the ACA. He was riding with his wife Raeanne. 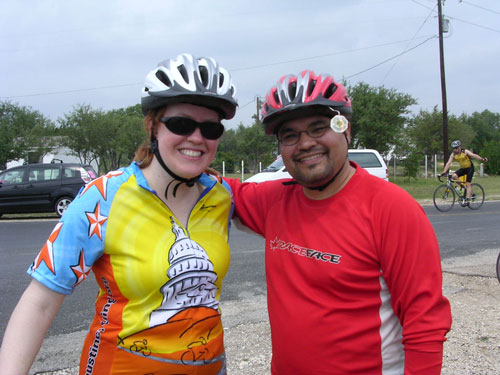 From here, it was a quick seven miles back to the start. How did I do? As I said, I’m improving. Fifty-one miles in 3:22:47 (time in the saddle), for an average speed of 15.21 mph. I also hit a new maximum speed of 39.2 mph, which was a lot of fun while I was doing it, but a bit unsettling at the end of the ride, when I saw the number on the cyclocomputer.

Today’s ride whetted my appetite for more. I’ll have to go back to the ride sites, and figure out when and where to do the next one. Stay tuned.