I got out for a short ride today — a bit of a treat, because I rarely get to ride two days in a row — and a bit of a downer, because I had to cut the ride short. But as I was mumbling to myself about what rotten luck I had that limited me to only a 13-mile ride, it occurred to me that I could put this ride to good use.

The ride was one loop of my Mopac route, one that’s popular around here not because it’s scenic, or challenging, but because it’s convenient. It has enough hills to make you work a bit, and there’s one downhill section where you can easily top 30 mph. There’s usually enough wind to add to your effort. By the way, the road is called the Mopac Expressway because farther north in Austin, the Union Pacific railroad tracks run between the northbound and southbound lanes. Before Union Pacific took it over the line was the Missouri Pacific, or Mopac. 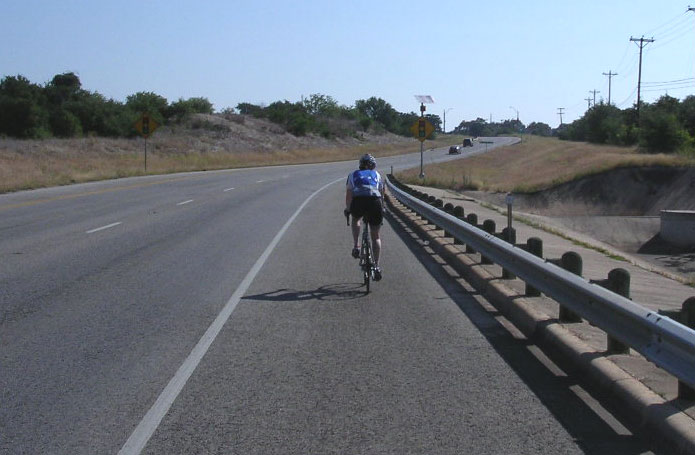 Another rider leads me up a long hill on Mopac on a recent Sunday morning ride.

It’s the very first ride I logged when I realized I was going to get serious about biking last year. So that means I can compare my times on a ride of the same length over a period of months. Maybe I can learn something from this exercise. The route is 13.1 miles long.

In 11 months of riding, I have cut 10 minutes from a 13.1-mile route, and improved my average speed by just over 3 mph. These results are very gratifying.

An important factor in my improvement is my new bike. I got the Specialized Allez Elite in February, so the Feb. 29 ride was the first one on this bike. Its lightness over the old steel Raleigh is perhaps the main reason my times have improved so much. But so is conditioning. I’m only about 10 pounds lighter than at this point last year, but I’ve got more power in my legs and more endurance, and I hope I’m a more savvy rider.

Eleven months ago, a single loop on Mopac was a long ride for me. Now, as the table shows, I don’t do single loops much anymore. Usually, I’ll do two or three loops in a single ride, or I’ll combine a Mopac loop with another route.

That’s part of improvement, too — adding distance. My current shortest ride is longer than the 13-miles of Mopac. So I’ll just keep plugging away, knowing that over time, I’ll just keep getting better. I’m encouraged.