After a pleasant experience riding with the “B” riders in our club, I wanted to keep doing it on a more or less regular basis. But two weekends in Michigan interrupted those plans.

So now that I’m back, I stepped up and volunteered to lead a B group ride. I suggested a trip to Kyle, Texas and back — a ride I like because the turnaround spot is a little independent coffee house in Kyle, the Lucky Cup.

Two other riders indicated they’d come along. Then the guy who ordinarily leads the A group rides every Sunday said he thought the route was a good idea, and the A riders would go that way, too. About 17 of us headed out. I rode with one of the other B riders, Bob, and we fell behind, but caught up with everyone in Buda (BYOO-duh), a small town south of Austin. 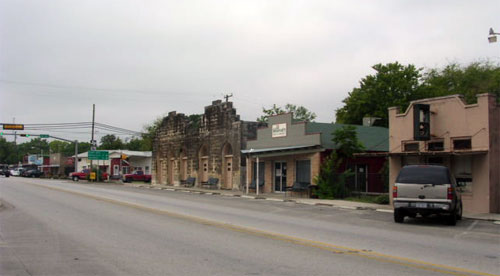 Buda still retains its old downtown, although it is rapidly growing into a bedroom community for Austin and is full of the fast food and chain store sprawl common to American suburbs.

From Buda, we took some back roads into Kyle, the next town south. We reached the Lucky Cup, and sat out on the patio with coffees and energy drinks. It was a pleasant break after 24-something miles of pedaling.

On the way back, Bob and I quickly fell behind again, and then I found myself well ahead of Bob. As I hit the turn onto Burnham Road (Ranch Road 1626), I glanced back and saw that he was hanging in, but trailing by several hundred yards. I figured we would regroup in Buda as we did on the way out, and he would catch up to us there.

But in Buda, I was alone. If the rest of the group had stopped, they’d already moved on. And there was no sign of Bob. I was perplexed. Two women cyclists we had passed in Kyle crossed ahead of me on Main Street. How did they get ahead of me?

I rode alone the rest of the way back to the Starbucks where we started the ride. Most of the gang was out on the patio, enjoying their post-ride coffees. And in the middle of them was Bob. “When did you pass me?” I asked. “When you turned onto 1626,” he said. “I kept going past the cement plant. It’s a shorter way into town. I caught everyone in Buda.” 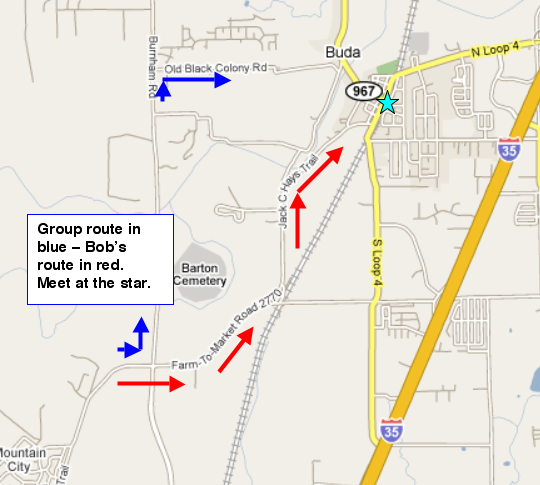 We took the more roundabout route on Burnham Rd. and Old Black Colony Road (Aside: It has that name because it was the site of a settlement for freed slaves after the Civil War). Bob’s route into Buda was more direct.

So the leader of the B ride was dropped by the B riders (Pippa, the other B rider today, had no trouble hanging with the A’s throughout the entire ride). Whatever. I did 46.25 miles at a 15.7 mph average — respectable for me. But I’m thinking about exploring a suggestion another riding friend recently made: Let’s start a group for C riders.