It’s time to get serious. I’ve actually set some goals for the next couple of months (more about that later in this post). But in order to meet those goals, I have to ramp things up.

I was happy, therefore, to see that this week’s B ride would be led by my pal David. He’s been biking since the early ’90s, and has been a dependable source of information about getting better. David decided the B’s would ride the Lost Creek hills (“I don’t know what’s ‘B’ about that,” said the A ride leader).

Once again, As and Bs headed out together. The As were going to do an over-the-top hills expedition, and we wanted no part of that. They went their own way about five miles into the ride. The Bs shot along the curvy downhill into the Barton Creek neighborhood.

At Lost Creek Blvd., we turned again. David advised us not to be afraid to ride the brakes on the upcoming downhills. They were twisty, and at over 30 mph, a bit unnerving. But then the climbs began.

The first one was daunting. We quickly shifted down to our lowest ring and cog combinations, and stood on the pedals, straining to overcome the steep grade. About halfway up, Chris, who was riding with us for the first time, declared that he was hopping off to walk. We waited at the top for him, and I was glad of the chance to catch my breath.

Two more similar challenges followed. Eddie, the other new B rider, led me to the top of each one, where we waited for Chris before starting out again. Finally, David gave us the good news. 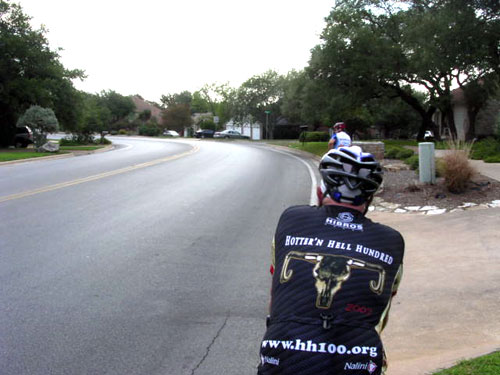 David (foreground) and Eddie wait at the top of the last of three Lost Creek hills. No shots of the hills themselves, because I was either hanging on for dear life on the downhills, or pulling hard on the bars in the uphills. Either way, I needed both hands.

David wanted us to get a taste of Loop 360. This is probably Austin’s best known biking route. It’s a four-lane divided highway with a generous shoulder. And it’s hilly, but not steeply so like Lost Creek. The hills on 360 are loooong. We traveled another five miles or so up 360, turned around and did it all over again coming back. 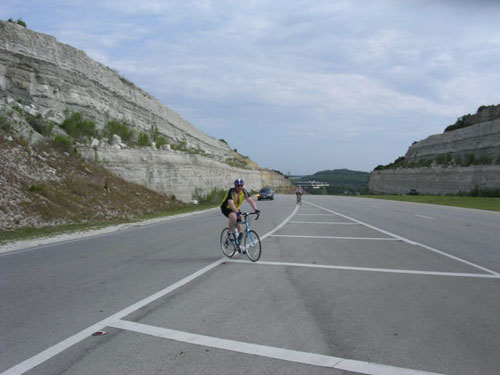 Chris crosses an exit ramp on 360, while David catches up.

In the post-mortem over drinks at Starbucks, David told us that riding Lost Creek and 360 would be a quick way to build our endurance and climbing prowess. No doubt about that. The good news for me was one, I actually climbed all the hills without having to get off and walk the bike up any of them — something that would not have been possible just a month ago — and two, I felt great after it was all over. I did 33.5 miles at an average of 13.6 mph — the hills really cut into the average speed — and I felt ready for more. It was a nice contrast to some bonking episodes I’ve talked about earlier this summer.

So, in light of today’s performance, I’ve decided to go public with a big goal for me: I’m going to tackle an Imperial Century. I plan to do the 100-mile ride at the Outlaw Trail 100 in Round Rock, Texas in October. I’ll warm up for it with a metric century (100 kilometers, or 62 miles) at the Tour de Florence, in Florence, Texas next month, and I’ll be increasing my weekly mileage and the length of my weekend rides between now and the ride day. Things are looking up for the Noob. Follow my progress here.