One of the benefits of being missed by a hurricane is the next day’s weather. The overnight low was only 64 — and I woke up to a day that was perfect for biking.

I had decided to skip the usual Sunday club ride, because they were going on a hill-climbing excursion. Instead, several members were planning to ride near Dripping Springs, which you’ll recall is one of my favorite places to ride around here.

I was at the appointed meeting place first, and had everything I needed — except my water bottles. I had put them in the freezer at home, and forgot them this morning. But Pippa came to the rescue. She had two extras, filled up and in an insulated carrier, so they were still cold. I don’t know why she carries two extra filled water bottles, but I’m glad she does.

Debra and her husband Russ, the other two riders, do this route at least once a week, since they live close by. We opted for the 40-mile route, which would take me much farther south onto roads that I haven’t ridden before. 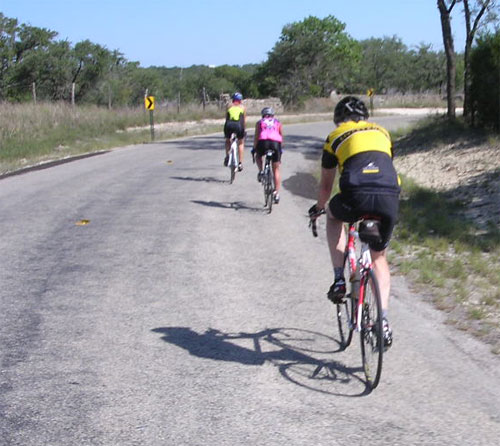 Debra leads Pippa and Russ around a bend.

It’s a great route. The narrow and sometimes bumpy country roads have little motor vehicle traffic on Sunday mornings, and most of the drivers even smile and wave. Small ranches line the roads, and some have longhorn cattle in the pastures. There are hills — but this is the Texas Hill Country after all. When we hit the turnaround point at about 20 miles, I was still fresh. We had tackled the hills with élan, and enjoyed some nice downhills, which allowed us to rest on the pedals. Even my cantankerous toe wasn’t bothering me.

We backtracked from the turnaround for about half the way, and I realized why the route had seemed so perfect — it was a lot more downhill on the way out than on the way back. We were climbing the hills we coasted down, which didn’t seem like they had much slope on the way out, and to compound our problem, we found we were now heading directly into the wind. It couldn’t have been much more than 10 mph, but we felt its effects. 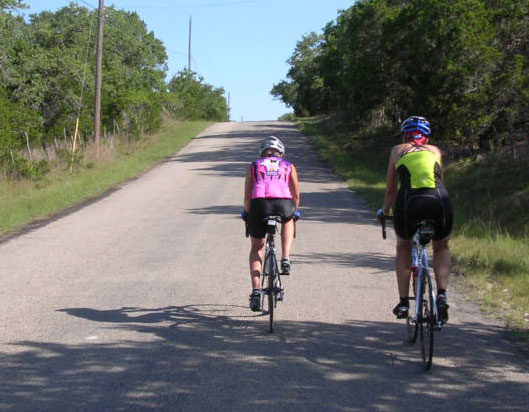 Pippa and Debra head up a small hill.

Our average speeds plummeted as we struggled up hill after hill. Mostly, they weren’t all that tough, but we weren’t in the attacking mode anymore. A nice curvy descent a few miles before the end of the route restored some pep to our step, so the ride ended with everyone feeling exhilarated. 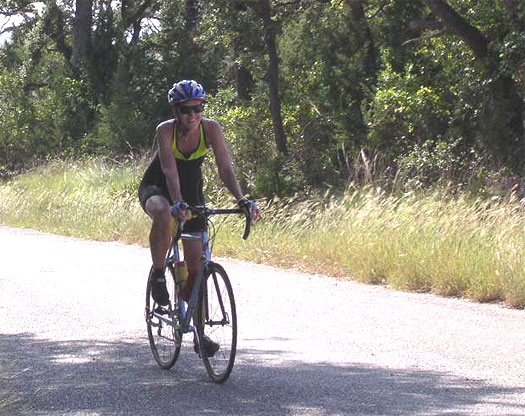 Debra pulls into a shady spot where we all decided to take a breather.

The temperature was still in the 80s when we finished. A cold front is supposed to come thru tonight, and is expected to bring more tolerable daytime readings (around here, anything below 90 is “tolerable”). I can’t wait.