A big day for me: I rode in — and finished — the Outlaw Trail 100 in Round Rock, Texas. Finally, I have a century ride under my belt. And as it turned out, it wasn’t as bad as I thought it was going to be.

I thought I was pretty organized. I did most of the work the previous night, loading the car, laying out my clothes. But when I got to the starting area in Round Rock, I found that I had forgotten something — my floor pump. So I figured I’d use the new frame mounted mini-pump to top off the tires. Uh, the pump is broken. It’s missing a piece where the pump attaches to the presta valve. It’s useless.

My blogging friend Jared found me, and I rushed to get myself together to go meet our other blogging buddy, Mike. In my haste, I left the route map in the car. It would have come in handy later. While they caught up on their biking exploits, I borrowed a floor pump from the bike shop sponsors and topped off my tires. 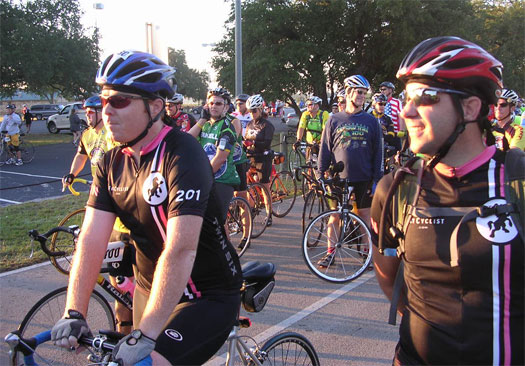 Jared (left) and Mike both showed up in their new Fat Cyclist jerseys. They’re in the starting area with the other 100-mile riders.

Then, we were ready for the race. I cut a most un-athletic figure while waiting at the line. 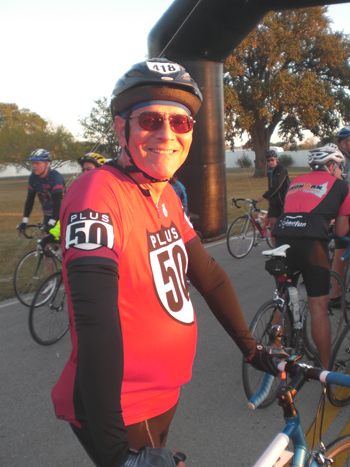 I’ll try to remember always to face the camera when posing in a cycling jersey (!).

It took about two miles before Jared and Mike were out of my sight. No matter. I had planned to ride at an easy pace throughout the ride. I could see quickly that my easy pace and the rest of the riders’ paces were in two different leagues. Up until the second rest stop, riders continually passed me. Although I was tempted to grab the wheel of more than one rider, I remembered to keep my eye on the prize — and finish, not race.

The ride traveled county roads through eastern Williamson County, Texas. It’s a farming area, known as “Blackland Prairie.” The harvest is in, and the fields are tilled. And the soil is black. 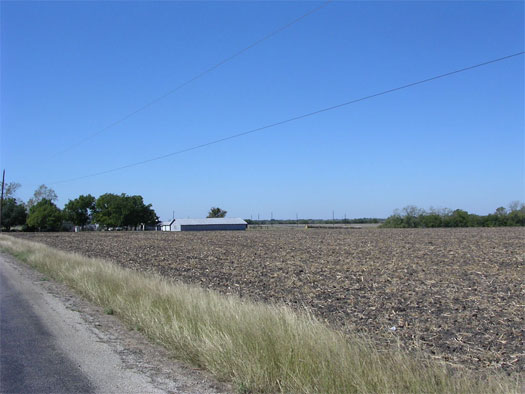 A typical view along the route.

I hadn’t been through here before, so I was interested to see what it looked like. In addition to mostly flat farm fields, we did go through a few small towns. Walburg has some old buildings that harken back to its beginnings as a mostly German settlement. 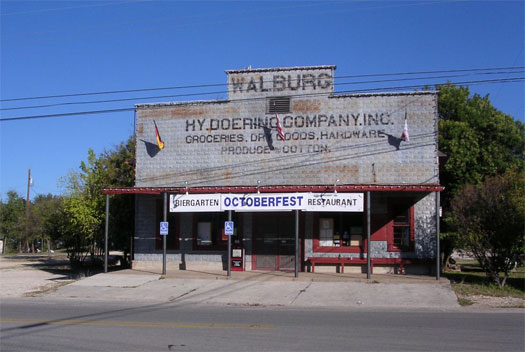 Doering’s general store dates back to 1881.

The biggest town we went through was Bartlett, the route running right through its business district. On a quiet Saturday morning, there wasn’t much activity. 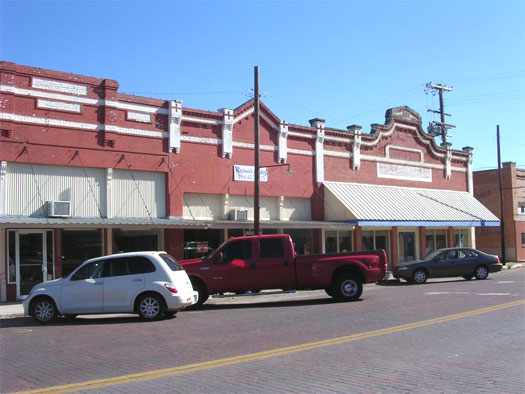 Bartlett used to be a major cotton shipping point — but cotton declined in the 1930’s, and so did Bartlett. Note the street paved with bricks.

Several miles past Bartlett, I came across the most notable incident of the day. A biker riding the Granger Dam road “caught on something” and went down. A trailing rider crashed into him, leaving the first rider with a broken collarbone. How the accident happened on the straightest stretch of road on the ride, with everyone moving at roughly the same speed and in the same direction, is a mystery. 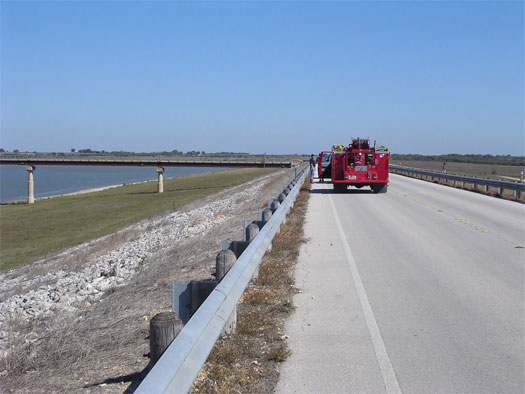 Emergency vehicles at the accident on Granger Dam Road. That’s Granger Lake on the left.

The rest stop at the far end of the Granger Dam marked the 55-mile point in the ride, and I was starting to feel the miles. My seat had the comfort of a hatchet blade. My foot was singing its usual song. I started to wonder if I would be able to finish.

The advice given about riding a century is to break it up into parts. Ride four 25-mile rides. Or five 20-milers. Since the rest stops were roughly 12 miles apart, I decided to break the remaining ride up into four 12-mile parts. I figured even I could do 12 miles. Then do it again. And again.

That was a bit of a challenge, because as the day wore on, the wind from the northeast picked up. Although the route was generally clockwise, and the wind would be at our backs for much of the second half of the ride, the ride organizers managed to incorporate a surprising number of jogs that took us into the wind. I got onto my small chain ring and just spun and spun.

Riders I had passed miles ago now passed me. With just a few miles to the finish, I was all alone on the road. I turned into the large park where the ride began, and picked up the pace as the finish line approached.

I gotta tell ya, it was a bit of an anticlimax. The announcers were still at their post at the start-finish line. When they saw me coming, they started yelling encouragement on the PA. The theme from “Car Wash” blared. I zig-zagged to the music, and they got a kick out of that. Then, across the line — and no one around to watch. 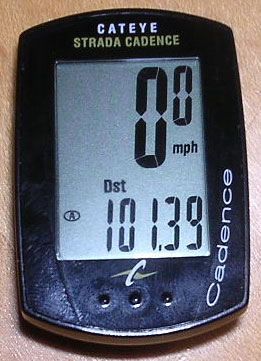 There were maybe a dozen vehicles left in the parking lot. I couldn’t even find someone to take my picture next to the finish line. But I do have a record that the century is in the books: A shot of my cyclocomputer. The tale of the tape: 101.39 miles at an average speed of 15.47 miles per hour. Six hours, 33 minutes, and 14 seconds on-bike time. Not bad for a Bike Noob. I had expected to finish somewhere between 3 and 3:30 p.m., and I crossed the line at 3:15.

The only place I felt the ride was in my thighs. They were sore, but even that was to diminish within a couple of hours. For once, I hydrated correctly during the ride. I stopped at every rest stop but the first, and mixed up my food choices from stop to stop: banana here, orange wedge there, pickle at this place. And I, who likes long breaks during long rides, managed to keep my time at the stops to about five minutes. All in all, a very satisfying day.

Would I do it again? I don’t know. I’ll be riding long distances in April in the MS 150, but getting out and doing one of these again isn’t tripping my trigger right now. I guess we’ll just have to see. After all, there is the Hotter ‘n Hell Hundred next summer, and I’ve always had an idea that riding in that one would be fun.