Some time ago, I read a tip about riding position that said you should use a carpenter’s level to make sure the saddle is in the right position.

A few days before Christmas, I remembered the tip, and spent a little time in the garage doing just that. It turned out the saddle was tilted up a few degrees, more than I had expected. Maybe that’s why I’d been feeling sore down there after a longish ride. 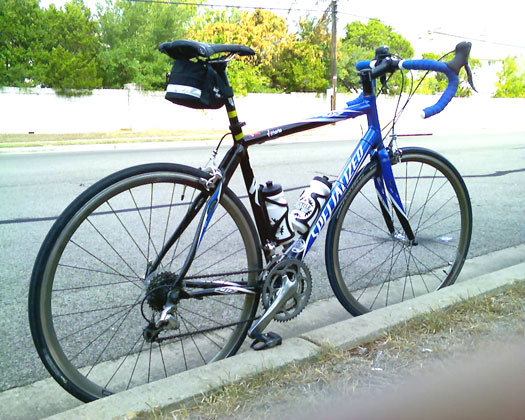 The saddle looks level in this picture from September, but it turns out that it wasn’t. I think the sloping top tube throws off the eye, making the saddle seem flat, when it’s really tilted up. Even though it’s tilted, it will still look flat when compared to the top tube.

I assume the saddle was level when I bought the bike. I had them switch out the original white saddle for a black one, and I hope they leveled it. After a few months of riding, I wouldn’t be surprised if it starts tilting one way or the other. Maybe that’s why the suggestion is to check its level once every month. Getting the saddle level again didn’t take long, although every time I thought I got it right, the pressure from the Allen nut would raise it. After several tries, I got it the way I wanted it.

I’ve now had several rides with the new saddle position. I hardly notice it, which I guess is the goal. Today, I did 19 miles of hills in strong wind. I wore some older shorts with rather thin padding. No problems with my bottom, but it’s time to start including more hills in my workouts again!

Anyway, if you’re not as comfortable aboard the bike as you think you should be, a few minutes with a level should help out.