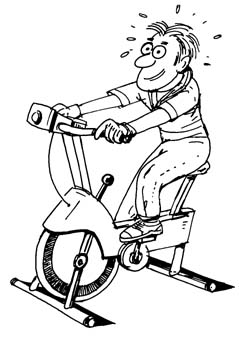 We’re going to have two mild weekend days, and I’m looking forward to getting in some bike rides. It’s a good thing, too, because I’m getting to the point where I would otherwise have to put in some time on a stationary bike.

I hate stationary bikes. The golf club I belong to has some recumbent stationaries in the fitness room. I rode them some last winter, but have been able to avoid them so far this year. Recumbents have no relation to the kind of riding I do, so they provide a workout, and make me sweat, but I don’t feel as though they provide as much benefit as I think they should.

At the fitness club my wife visits, the stationary bike situation offers more options. She lets me go there on the occasional guest pass, and I’ve been to spin classes there, although not this year, and I’ve ridden an upright stationary bike — the kind with the screen for picking the type of workout and the level of effort. They’ve got some spin bikes in the room with all the ellipticals and stairmasters and the other bikes, as well. Haven’t tried one yet.

Likewise, I’ve never even thought about getting an indoor trainer to use in the house — the kind you mount a real bike on. I think pedaling a real bike indoors would absolutely drive me bonkers. It’s a moot point anyway, since there is no room in our house for a trainer. We don’t have a basement, and both of our extra bedrooms are already being used for other purposes — both are full of furniture.

To me, biking is something you do outdoors, on a bike. I’m lucky to live in an area with a mild climate year round, and the chilly weather we’ve had lately is an anomaly. So if you can put up with a little time off the bike, the good biking weather will return soon enough, and you can do your pedaling outdoors again.