We probably could have seen it coming.  It had rained lightly in Austin all day Friday, and when I went downtown to load my bike on the truck and myself on the bus, it was still raining. 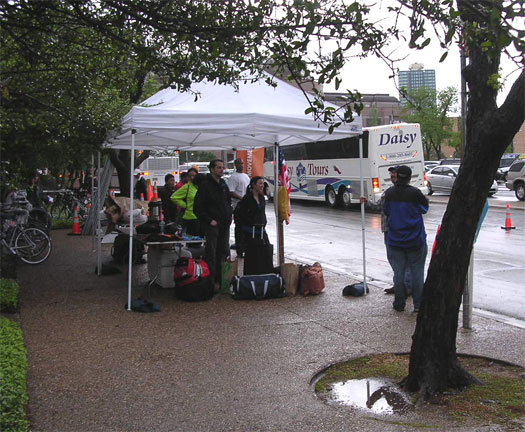 The check-in tent for MS 150 riders on a gloomy, drizzly afternoon.

When the bus pulled away for the ride to Houston, the skies opened up.  The farther east we got, the heavier the rain became.  Some areas along the ride route recorded 11 inches of rain.  I snapped a poor photo from the bus, but I think it shows the extent of the problem caused by the downpour. 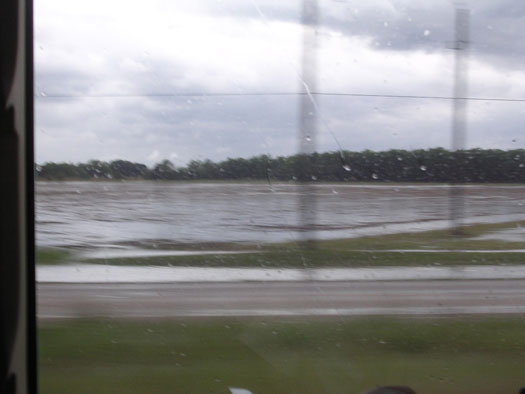 That’s not a river or a lake — it’s farmland.  Shortly after I took the picture, some other riders on the bus started getting updates on their cell phones: the first day of the MS 150 was indeed cancelled.

My hotel roomie, Jared of Just Another Nerd…, got to Houston and checked into our hotel, which was about a mile from the main ride headquarters hotel.  The ride organizers said there would be an update at 10 that night, so we made it a point to be present for the announcement. 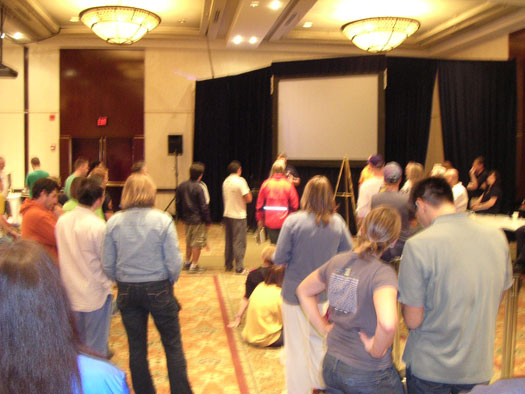 Most of the crowd were good-natured about the circumstances of the cancellation.  Parts of Saturday’s route were under water, and the county fairgrounds in LaGrange, where we were to spend our first night, was a quagmire.  On top of that, so much rain had fallen that it had collapsed some of the team tents.

The new plan was to shuttle Austin-based riders who had paid for transportation to Houston from Houston to LaGrange at 5:30 a.m. Sunday.  Our bikes, which went to Houston by truck, would be taken to LaGrange by those same trucks.  The ride would begin promptly at 8 a.m. Sunday.

When we woke up Saturday morning, the correctness of the decision to cancel the ride was obvious.  It was pouring.  I would have been content to get a cheap paperback from the hotel gift shop and curl up with it in the room all day.  But Jared had other ideas.  He rented a car, and we drove over to the Houston Museum of Natural Science. 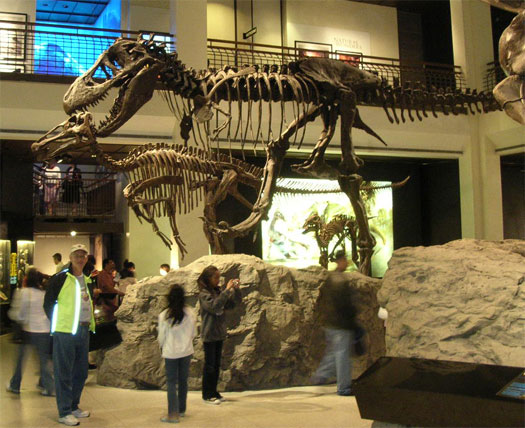 The Bike Noob with the Tyrannosaurus Rex at the Museum of Natural Science.

We spent hours there.  Every so often, one of us would look outside, where it seemed to be raining harder than ever.  We began to steel ourselves to the possibility that the second day of the ride would be cancelled, too.

But during supper Saturday night, we learned through text messages and the ride’s web site that Sunday was a go.  The food was dispensed with quickly, and we went back to the hotel to get packed and turn in early for an extremely early wakeup call the next morning.