Jared and I got up at 3:45 a.m. to dress, pack, and head for breakfast. The buses would load at the ride headquarters hotel, and head for LaGrange at 5:30. We were disappointed to find that they weren’t the airline-like tour buses of Friday, but garden variety school buses. Still, they did get the job done, and got us to LaGrange on time.

And lo and behold, everything came together they way it was supposed to. Our bikes were easy to find. We organized our kit, and put our luggage on the truck for the trip to Austin. We had just enough time to top off the air in the tires and take our places in the crowd for the mass start. 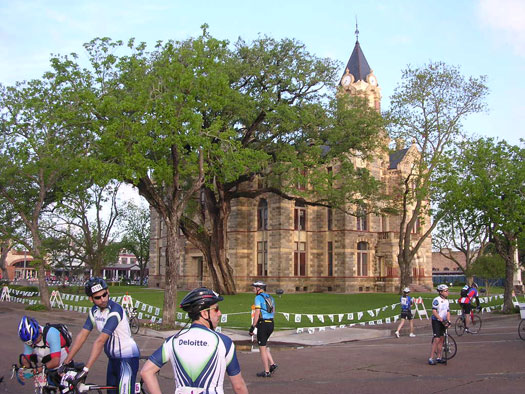 The courthouse square in LaGrange was a picturesque place for the ride to start.

I was interested to see whether the ride would suffer a large defection from riders who were disappointed in the first day’s cancellation. It soon became evident that if there were dropouts, they didn’t make an appreciable impact. 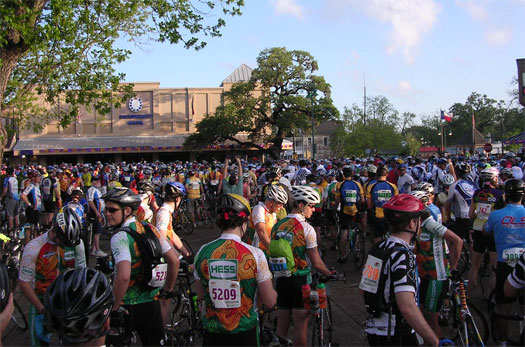 Ride organizers cap the MS150 at 13,000 riders. More than that is too hard to handle. This year’s ride filled up within six hours. It’s the largest MS 150 ride in the nation. I’m not much for making crowd estimates, but it looked to this untrained eye that most of those who signed up made it to the event.

Plans to have the top fundraising teams from the previous year lead off the ride were scratched, because of scrambling to re-plan the ride. Instead, groups of about 25 were started in waves. The morning was sunny, temperature in the mid-60sF, and everyone seemed excited to finally get the ride going.

Riders had a choice of two routes to the lunch break in Bastrop, about 45 miles away. They could take the “Lunch Express” route, which had them ride the shoulder of Texas 71, a four-lane divided highway, or they could take the “Challenge” route, which rode less-traveled farm-to-market roads, and wound through two state parks. The parks featured some tough hills. I took the Challenge route. 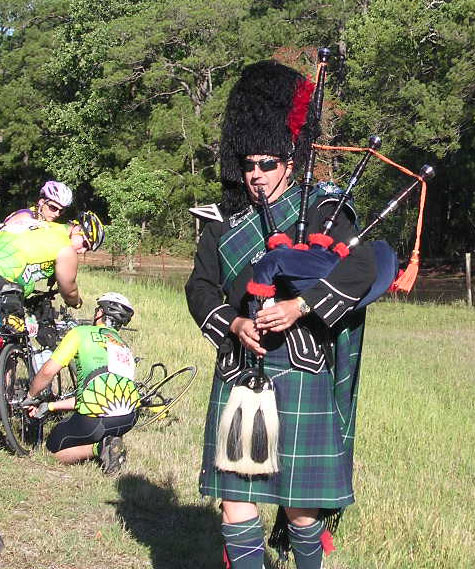 A bagpiper serenaded riders just miles into the day’s journey.

The Bastrop area is known as the “Lost Pines” of Texas, because it’s the site of the farthest west stand of pines in the state. The trip through the state parks was scenic and shaded much of the time. My bike was performing well, and I was surprised to see how many breakdowns were happening along the route. 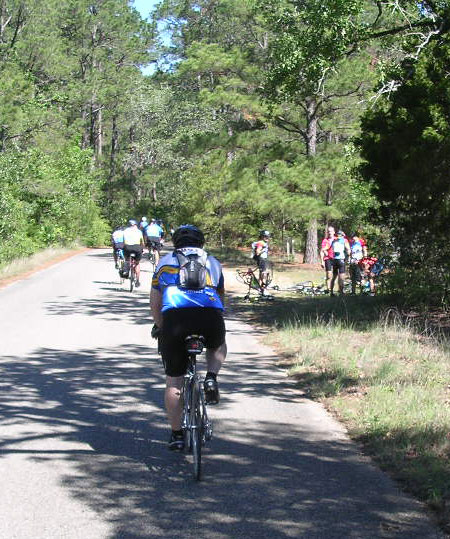 This is a flat section of the parks. I chose not to stop on the hills to take pictures.

Texas is flat in the Houston area, so Houston riders don’t get much chance to train on hills. The hills in the state parks were mostly steep, but short. Riders had to deal with the incline-challenged suddenly coming to a dead stop in the middle of a climb, and bailing out to walk the rest of the way. Shouts of, “Move out of the road,” became common. Since I include hills in about half my rides, I found these to be challenging, but doable.

Once we left the parks, the terrain morphed to long, gentle hills. We got a break in Bastrop, where the rest stop was also a lunch stop. 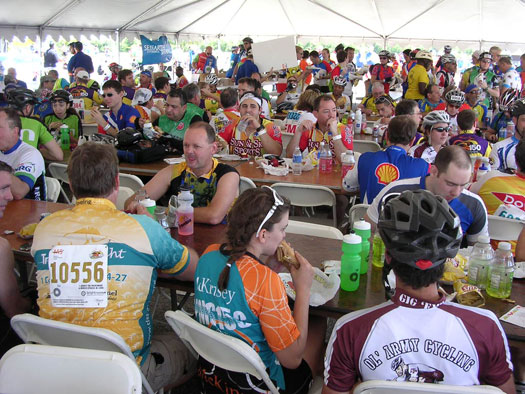 Riders were treated to turkey or veggie sandwiches from Subway, potato chips, a small apple, and a bottle of energy drink.

To feed thousands of riders is no small feat, and the efficiency of the volunteers during my lunch stop amazed me. Here was also where one of the odd happenings of the day took place. I wound up seated across from four women from the Dow Chemical team. I put my helmet with my number, 1520, on the table, and found that one of the women’s helmets carried number 1521. Out of 13,000 riders, we thought that was a fun coincidence.

We’d been dealing with a moderate northwest headwind for the whole trip, but out of Bastrop, the route turned more to the north, and the wind became tougher. As we slogged along, a rider pulled up beside me.

Stunned, I could only reply, “What?”

“Are you the blogger known as the Bike Noob?” he asked.

His name was Randy, and he’s a regular reader. How did he find me?

“All day long, I’ve been looking for a blue Specialized with torn bar tape,” he said. “When I saw your bike, I knew it had to be you.”

I had wrapped black electrical tape over the ruined part, but he figured it was a bar tape bandage. We rode together for awhile and had an enjoyable chat. After the next rest stop, I didn’t see him again.

Usually, on organized rides of 1,000 to 1,500 riders, the crowd thins out after the first rest stop, and you often see only a handful of others on the road with you. Not so with the MS 150. All day long, a line of cyclists stretched as far as the eye could see, both ahead of you and behind you. Often, they took the entire right lane, holding up motor traffic that stumbled onto the same road. 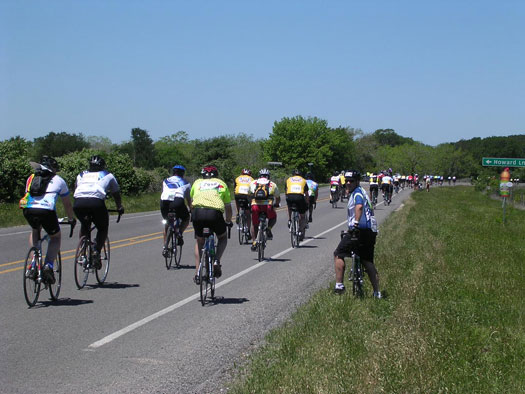 The police were out in force, and did a nice job of controlling traffic. It appeared that they had decided to give cyclists priority this day. As the ride entered Austin, riders became even more bunched up because of heavier traffic and the requirement to actually stop for some red lights.

As we approached the finish, the crowd lining the streets exploded. They yelled and cheered, used noisemakers and drums, and competed with the loudspeakers that boomed rock music at the highest volume I’ve ever heard. Mrs. Noob found me within a few minutes in the milling throng, and we got everything together for the ride home. 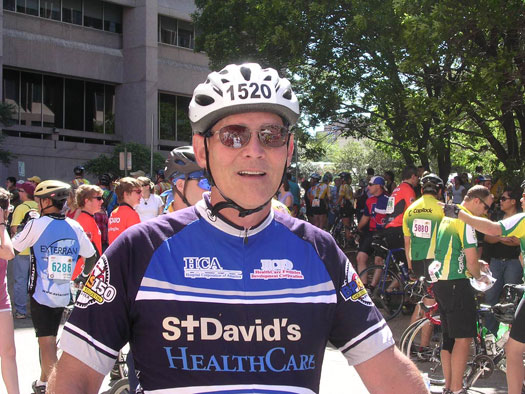 Ride’s end. Barely room to get a picture with so many people around.

A good ride, marred only by the loss of day one from Houston to LaGrange. That would have been roughly a full century. My cyclocomputer said I covered 74.8 miles today. The ride organizers pegged it at 77 miles. Average speed, only 13.2 mph. The headwind and slow riding in the crowd kept the speed down.

I did the ride for the challenge, and to support two people who are living with MS: my cousin Nancy, and our friend Mary in Minneapolis. I’ll always have the memory of the riders with jerseys that read, “I have MS, that’s why I ride,” and the spectators along the course who held up signs reading, “Thank you for saving my life.” It chokes me up just to think about them. If you haven’t done one of the many MS 150s around the country, I heartily recommend you give it a shot.