Just put my son and his girlfriend on the plane to head back to Minnesota. They were here for four days, which is why the posts have ground to a halt. We were pretty much going non-stop during that time, because the young lady had never been to Texas, and we wanted to show her a good time.

Luckily, I did get one bike ride in. Friday morning, everyone slept in, so I headed out for a tool around the Veloway and then did one Mopac loop for a grand total of 16-something miles. The Mopac loop is the site of a bi-weekly time trial, which some friends have been urging me to do. As I’ve said many times, I’m not a racer and am not really interested in it, but I’m thinking I might try the time trial once, just for the heck of it. So I tried to do Mopac at a time trial pace.

I do have a benchmark: my friend David is a regular at the TT, and his goal is to complete the eight-mile loop in 25 minutes. He hasn’t managed it yet. So I set out with that in mind.

Friday morning was warm, but not terrible. Then the sun came out and the heat built up quickly. A brisk southeast wind blew moist air in from the Gulf of Mexico. My southbound and eastbound legs ran smack into the wind, which kept me from hitting my best time — at least, that’s a convenient excuse if anyone asks.

So I finished at something over 26 minutes. Probably closer to 27. I didn’t get an accurate read, because I wasn’t certain of the TT finish point, so I guesstimated it. I guess if I do decide to enter the time trial, I’d better do a little more work, first.

Which brings me back to the notion of rebuilding, which I introduced in the headline. Because we were showing the kids around, lots of food was involved. And that means Tex-Mex and Texas barbecue. For this transplanted Yankee, Texas barbecue was different than what I was used to, but I developed a taste for it just like that. 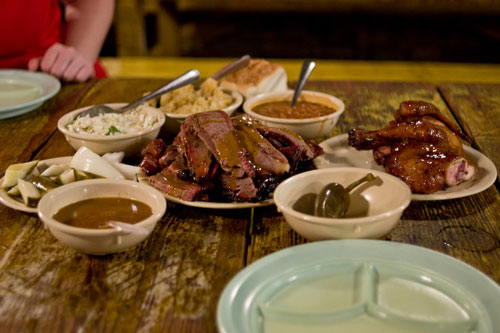 Family style at Austin’s famous Salt Lick Barbecue. This shot doesn’t even show the sausages and ribs! Because of odd blue laws, it’s also BYOB. And we did.

We had barbecue for dinner Saturday and brunch Sunday. We chowed down on juicy cheeseburgers and fries Friday while at the movies. And we washed it all down with copious quantities of beer.

Now, I’m betting some of you are wondering, “How the heck is this guy going to get in shape to ride a time trial?” Heck, I’m wondering how I’m going to get back in shape to ride, period. I sneaked a peek at the scale Sunday morning, and I’d picked up five pounds over the last three days. And that was before we went out to Sunday brunch. Which was the Gospel Brunch at Stubb’s BBQ in downtown Austin, so not only was there barbecue on the menu again, but some nice Tex-Mex, too, featuring migas — a mixture of scrambled eggs with tortilla chips, tomatoes, onions, cheese, lime and a little jalapeno — and music by the Aretha-esque Christianettes out of San Antonio.

I’ve been pleased that through biking and being a little careful about what I eat, I’ve dropped 12 pounds since February. This weekend put the brakes on that trend, though. However, the school year is over, and while I have plenty of work to do writing research articles and planning for my summer class, I’ll also have time to ride almost every day for the next three weeks. So my rebuilding will focus on two goals: re-lose all the weight I gained back and keep going, and see if I can actually get myself time trial-worthy.