First of all, thank you to all who rightly threw my whining back in my face and told me to get out and ride some different routes to break out of my pity party. Today, I did. Temperature in the high 70sF, no wind to speak of, and bright sunshine — a glorious day for biking. I rode in an area southeast of the city where I’ve ridden on club rides, but this time I did it alone. I took some roads I haven’t been on before. It was a “lollipop” route: 10 miles out, then a 10-mile loop on some decent country roads, then back home on the same 10-mile route I took to get out there. It’s the longest I’ve ridden since the MS ride last month, and when it was over, I felt great.

One of the attractions on this particular route is an exotic game ranch. If you’re lucky, you can see lots of African wildlife from the road. This morning I saw some antelope with the twisty horns, deer that are different from the North American whitetails, and even a zebra. But I had only my cell phone with me, and the pictures are no good. Next time I’ll take a decent camera.

While I was stopped to look at the critters, I straddled my bike. Not the brightest thing to do, because in no time at all, it was there — the dreaded chainring tattoo.

I’ve heard lots of talk about chainring tattoos being the sign of the rookie biker.  What’s a chainring tattoo? It’s that nice greasy mark on your calf from touching the chainring of your bike — usually the large ring, when the chain is on the small one. Sometimes you’ll hear it referred to as the “amateur mark.” I’ve been riding almost two years, and I still get them. So what’s amateur about that? 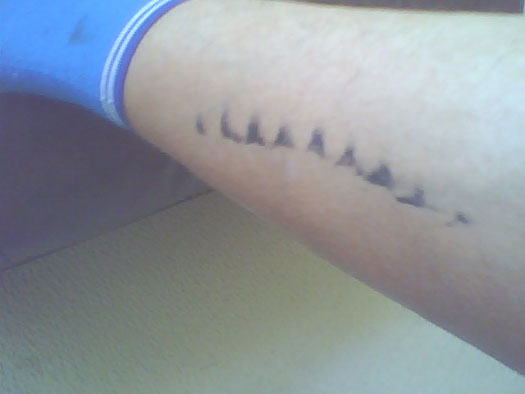 My own “amateur mark.” A particularly good specimen, I think.

I figure if you’re on the bike, you’re bound to come away with a tattooed calf. Not much you can do about it, and furthermore, it’s not something I’m going to go to great efforts to prevent.

The biggest problem is, it’s tough to completely remove in the shower — even with a slightly abrasive skin cleanser. Oh well, it’ll fade away in a day or three.

Any thoughts about the “amateur mark” slander that accompanies these things?