Well, I went and did it. I entered the bi-weekly time trial run on the Mopac loop I so often ride. This is part of my effort to inject a little more fun into my cycling. Several members of my club, and other friends, have been urging me to do it, and although I’m not that much for riding fast for long distances, I figured it was time.  If nothing else, I would get a realistic picture of where I stand vis-a-vis other riders.

Check in is at the Veloway, just two-and-a-half miles from my house, so I rode over. At the first stoplight on the way, one of the club members pulled up next to me. Steve T. loves these things, and tries not to miss any of them. As we rode together, I asked him the secret of this event.

“The secret is not to blow up,” he said. “Go out at 80 percent for the first half. When you make the turn, then you can really push.”

It sounded like good advice, and I planned to follow it. We got to the Veloway, and I waited in a short line to check in. 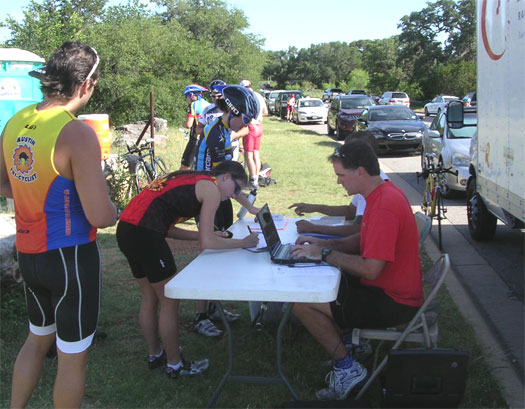 Some riders rented timing chips for $5, others had purchased theirs for $35 earlier in the season. I was one of the renters. 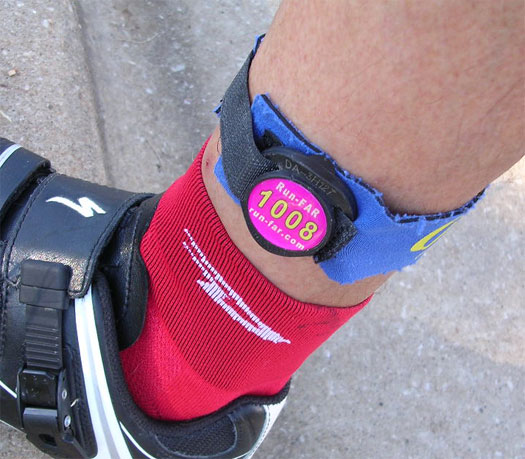 Affix the chip to the strap, strap it on your ankle, and you’re good to go.

I took one three-mile lap around the Veloway to warm up. Don’t know why I bothered; it was 91 degrees and very sunny. Riders could head for the course any time after 6 p.m. As I waited in the shade for the magic hour to roll around, my friend David rode up. He wasn’t 100 percent sure he would do it tonight, but when he saw me, he figured what the heck. He signed in, and as it was now just after 6, we headed out to the course together. 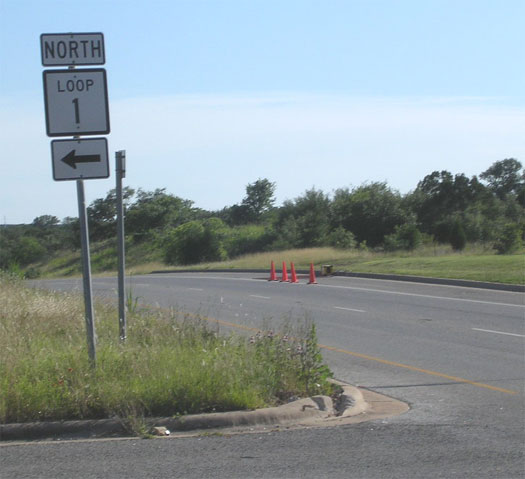 The start. Just ride across the mat by the cones. It beeps. You’re off.

I’ve always enjoyed going to the Veloway on time trial nights, just to look at the bikes. Some of these guys take this thing very seriously. 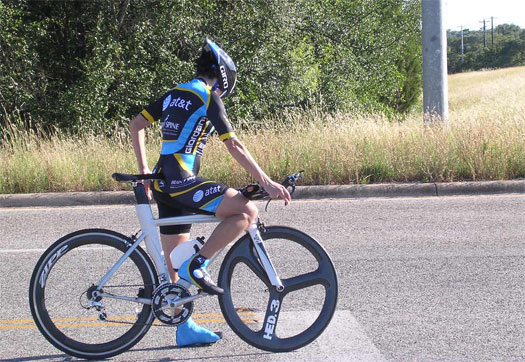 In deep thought while waiting to make the turn onto the course. 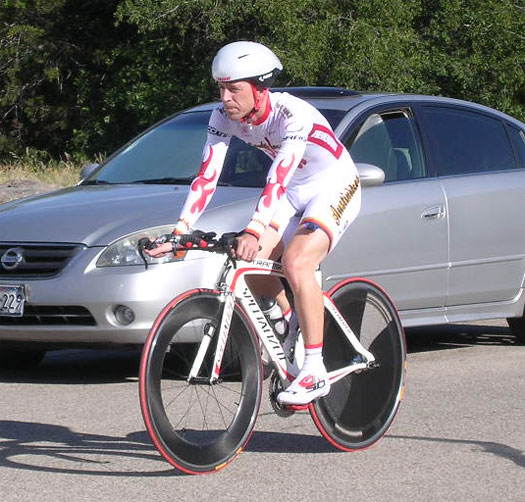 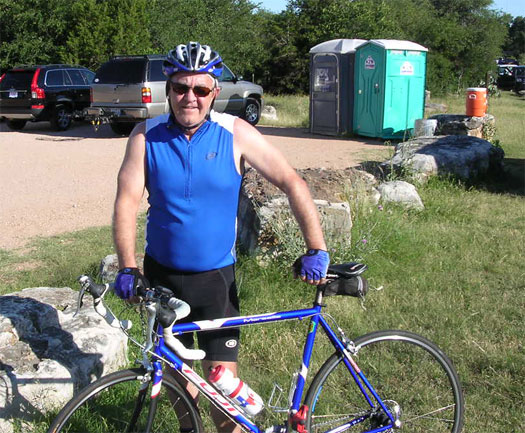 Ah, normalcy! Recreational riders were out in force, too. My friend David.

David and I started together, because he’s done this before, and wanted to show me the way. But trouble hit right at the start. When he zeroed his computer, the wire disconnected. He was riding blind, and was most bummed that he couldn’t track his cadence.

I pulled ahead of David, and led him into the sweeping right turn that heads us west. Soon, we hit the first big uphill, to Escarpment Blvd. I shifted to the small chainring and kept up my pedaling cadence. When I glanced over my shoulder at the top of the hill, David had fallen off my pace.

Farther on, the road ends in a T intersection at Ranch Road 1826. Before the turn, riders must cross to the left shoulder of the road. There’s a stop sign at the intersection, and at this hour, homebound commuters are lined up waiting to make a left turn as well. When I got to the turn, a pickup truck at the stop sign started to pull away. He saw me in his side mirror, and hugged the curb as he turned, almost cutting me off. I was able to slow enough not to run into his back fender, but I had only enough wits to shout an unprintable word at him. If he’d pulled this stunt while I was on a normal ride, I would have filed an assault with a deadly weapon complaint with the sheriff’s department. But tonight, I was more interested in the ride. I made my turn and kept going.

Heading back east, it’s downhill much of the way, and even the two uphills aren’t bad. But it was into a moderate wind from the southeast. I got up to 33 mph into the wind on the longest downhill, then turned north for the last couple of miles.

By this time, I was really feeling it, and I had a couple more hills to negotiate. But now, the wind was at my back. Trouble was, I had drunk too much water before the start, and a side stitch had been bothering me for most of the ride. I put it out of my mind, and pushed up the last hill to the finish. 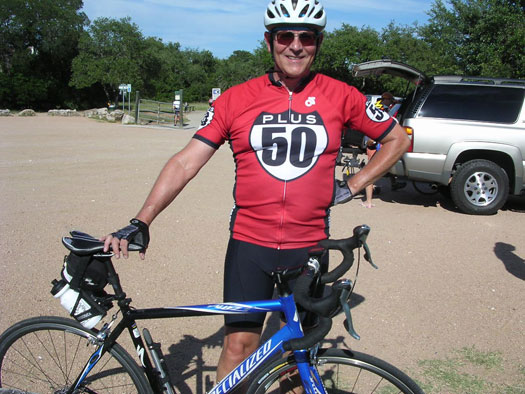 At the finish, a tired but happy Noob.

David always set a target of 25 minutes for the 8.12 mile course. Since we’re pretty evenly matched, I figured that would be my benchmark, too. So I was pleased when the results were posted — I did it in 24 minutes, 34.8 seconds. Average speed: 19.5 mph — about 2 mph faster than I typically ride this course. That placed me 67th out of 75 riders. David came in a minute 19 later. We sat around and talked while we recovered from the effort, but we’ve got a long way to go to compete with the big boys.

Okay, so now I know where I stand. I did a lot better than I expected going in, and that’s a confidence builder. I won’t be doing these things again though, until they wind down in September — then I’ll run another one to see if I show any improvement over the summer. The guys who’d been after me to ride this were right: it’s fun.