After my MS ride last month, I was sore. I wondered whether my bottom problems we the result of my saddle. I ride the Specialized Alias saddle — 143 mm size — and I’ve read and heard a lot of nice things about it. Last year, I even wrote about the comfort of the saddle. But since then, I’ve become less enamored of it.

My friend David invited me to try one of his spare saddles, just to see if it would make any difference, so I went by his house to pick it up. It’s a Selle San Marco Ponza, and comes as factory equipment on several mid-range bikes. Reviews I’ve seen online are all over the map; some reviewers love it, some hate it. I’ll bet that’s true of the majority of saddles, which tend to be the most personal pieces of equipment on a bike.

I was anxious to try anything new, so I put it on the bike and have ridden it a number of times. 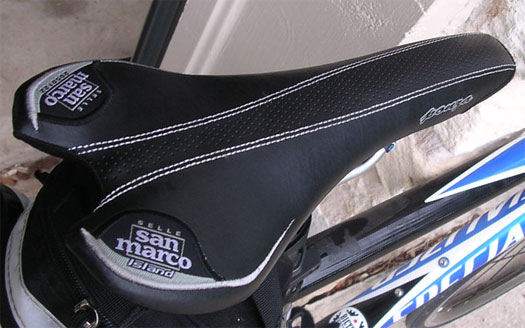 It’s not apparent in the picture, but the first thing you notice about the Ponza is its width. It’s a racing-style saddle, and quite a bit narrower than the Alias. I’d been leery of trying a narrow saddle, so I began this test with some trepidation. 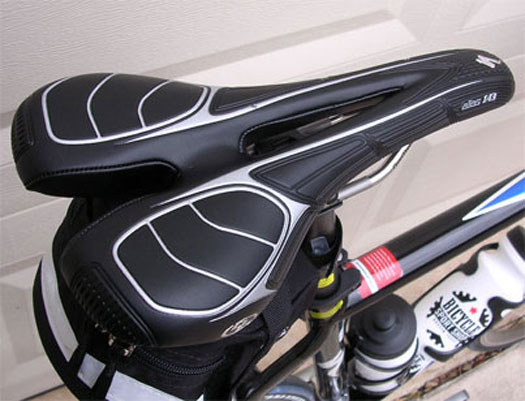 The other obvious difference is the lack of a cutout on the Ponza. That bothered me, too. I couldn’t imagine being comfortable, especially after more than about 20 miles, on a saddle that offered no relief to the softy bits.

But the experience was a revelation. The narrow saddle felt much better under me. It’s much easier to slide into and out of when you’re up out of the saddle during a hill climb. My important stuff didn’t get squashed the way I feared. On our 34-mile jaunt last Sunday, I completely forgot about the saddle — which I guess is a pretty good endorsement.

The saddle isn’t perfect. For one thing, it has an almost complete lack of padding compared to the Alias. That’s not necessarily a bad thing, since the saddle is supposed to handle only part of the job of supporting a rider. The pedals and handlebars have to absorb their share of the load, too. And once I got used to coasting with the pedals in a horizontal position, and standing to pedal on even slight hills, any discomfort went away.

Still, I think my search for the perfect saddle is by no means at an end. I’d like to try something like the Ponza with a cutout, or at least a depression down the middle. I’ve got one in mind, and I’ll be mounting that on the bike in the next week. Look for another saddle progress report in the near future.