The weekend approaches, and with it, the promise of longer rides than I get in during the week. Some hills will be involved, especially on Sunday’s ride, and that will probably bring my average speed below my average. (?)

I’ve always considered myself a 15-mile-per-hour rider, which is why I ride with the B group on club outings. But I’m not really sure how much faster I’ll have to go to bring up my overall average.

Reader Don from California says he considers himself to be a slow rider, but since he usually rides alone, he has no one to measure against. “On an average ride I’m in the 17 mph range,” he says. See ya, Don. I’ll watch as you leave me behind. Don wonders if he would go faster if he rode with someone.

But then he asks the key question: “I also wonder if speed matters?”

Well, of course it does. Man, I track my ride stats like pitchers track their ERA. And I’m kinda concerned. It looks like I might not be a 15 mph rider after all, if you believe my Bike Journal stats for June: 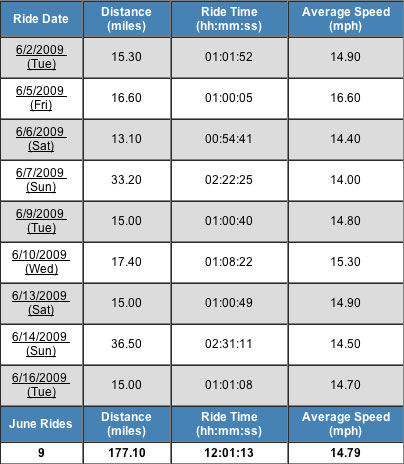 Yikes! I’m only a 14.79 mph rider. Yeah, I see where I pushed it a couple of times, but those were when I was deliberately pushing it.

I averaged 15.47 on my century ride last fall, and I know I’m a better rider now. I’m having trouble accounting for this apparent slowdown. Should I be worried? Or should I be like Don, and wonder if speed matters?

What’s your average speed? Do you even track it?