The Tour de France is just around the corner, and it’s time to revive the post about bike team names. This year, some new teams have come on the scene, and some old ones have dropped out of pro cycling. So let’s find who’s behind those continental-sounding corporate names, and learn a little about the teams that will compete in the Tour. 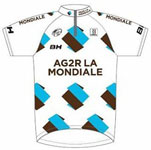 Ag2r-La Mondiale — France — Ag2r Group is a French-based interprofessional insurance and supplementary retirement fund group. The La Mondiale Group is a French-based international group for supplementary pension and estate planning insurance. The company has announced it will sponsor the team for two more years, and they’re rolling out a new jersey, white with light blue and brown splotches. While that might be a very contemporary color combination, most of the chatter I’ve seen online about it has been less than charitable. Top riders: Cyril Dessel and Vladimir Efemkin.

Agritubel — France — Worldwide provider and manufacturer of tubular metal products for cattle, livestock and farming. This will be the team’s last Tour. The company feels it has met its goals of increasing brand awareness. Eight of the nine riders are French. Team leader Christophe Moreau, at age 38, is also riding in his last Tour. He’ll chase a stage win or even challenge for the King of the Mountains. Another hope for the team is Romaine Feillu, who wore the yellow jersey during last year’s Tour.

Astana — Kazakhstan — Sponsored by the Astana group, a coalition of state-owned companies from Kazakhstan and named after its capital city Astana. Managed by Johan Bruyneel, who ran the Discovery Channel team when Lance Armstrong was winning Tours, the team includes former Discovery riders Levi Leipheimer and 2007 Tour winner Alberto Contador, along with Armstrong, who is riding without a salary this year. The team has had financial trouble, and couldn’t pay its riders for awhile, and Armstrong and Contador are not best buddies. 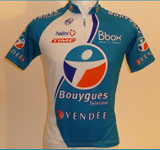 Bbox Bouygues Telecom — France — Bouygues is a mobile telephone company. This year, they’ve added Bbox to the team name. Bbox is the bundled Internet, TV, and telephone package offered to Bouygues customers. Thomas Voeckler has won a stage at the Tour in the past, and is the team’s best rider. Yukiya Arashiro says he wants to be the first Japanese cyclist to finish the Tour. Realistically, this team is not expected to be a contender.

Caisse d’Epargne — Spain — The team is registered to Spain, but the sponsor is the fourth-largest French banking company. Caisse was the top pro tour team in 2008, and their star, Alejandro Valverde, was the top pro tour rider. But Valverde has been caught up in the Operacion Puerto doping scandal, and is banned from riding by the Italian Olympic Committee. Since the Tour has a stage in Italy this year, Valverde will not be racing. Oscar Pereiro, who won the Tour in 2006, says he’s healthy again after being badly hurt in a fall during last year’s Tour.

Cervelo Test Team — Switzerland — The Tour was won on a Cervelo bike last year, but the team that rode them — CSC Saxo Bank — jumped to Specialized bikes this year. What was Cervelo to do? They started their own team, and started with a bang, by signing last year’s Tour winner, Carlos Sastre. Then they claimed Norwegian sprinter Thor Hushovd, who was orphaned when Credit Agricole dropped out of pro cycling. The team petitioned to the UCI for permission to wear a mostly white jersey, when they realized their black jerseys would be too uncomfortable in France’s summertime weather. 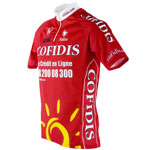 Cofidis, Le Credit En Ligne — France — Consumer Credit. Offers customized consumer loans either by phone or over the Internet. They seem to be emphasizing their online (en ligne) business this year, because previously, they were Le Credit Par Telephone. The company has been sponsoring a team since 1997, but was talking about getting out, because they do business in only a few European countries. However, they’ve now said they’ll be around through the 2010 season. Expect Cofidis to attack in the mountains, led by climber David Moncoutie, although sprinter Samuel Dumoulin could be a factor in the flat stages.

Columbia-HTC — United States — The team is owned by Highroad Sports, and sportswear manufacturer Columbia took on the main title sponsorship last year. Just last week, HTC, Taiwanese maker of mobile devices, such as the T-Mobile G1 that uses the open source Android operating system, joined as the second title sponsor. The team was hugely successful last year, its first in pro tour competition. Sprinter Mark Cavendish is its big gun, and the team also features American George Hincapie. The new jersey with HTC name has less yellow than the Columbia-Highroad version, which I like, because I think yellow should be reserved for the Tour leader.  The white is supposed to represent transparency, as in the team’s rigorous independent drug testing procedures.

Euskaltel-Euskadi — Spain (Basque) — Basque telephone company. Euskadi is the Basque word for Basque. The Basque Country is an autonomous region in the north of Spain. Basques are ethnically different from Spaniards, and there’s been some separation sentiment for years. Euskaltel is the unofficial national team of the Basques. They pass out t-shirts in their trademark bright orange when the Tour goes through the Pyrenees, and hordes of fans come out to cheer them on. Mikel Astarloza is the team’s climbing star, but in my opinion, the coolest name goes to Amets Txurruka, who won the “most aggressive” prize in the 2007 Tour. 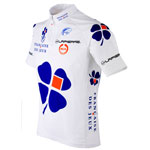 Francaise de Jeux — France — The French national lottery. This is another French team that began in 1997. Most of the riders are French, but they do have some foreigners on the team. Team leader Sandy Casar won a Tour stage in 2007, after crashing into a dog that ran onto the road. Remy de Gregorio and Wesley Sulzberger are young riders who are expected to make their mark in the Tour. The team’s blue and red shamrock is easily identifiable during the race.

Tomorrow, a rundown of the remaining ten teams in the Tour.