A look at the second ten teams in the 2009 Tour de France. The first ten were featured in yesterday’s post. 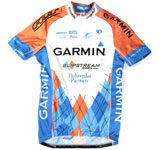 Garmin-Slipstream — United States — Garmin, the GPS company, is the sole main commercial sponsor this year. Chipotle is no longer a name sponsor. Slipstream is the sports marketing and development company that headed up the creation of this team last year. The pale blue and orange argyle is a distinctive look. The team’s leader, Christian Vande Velde, suffered multiple fractures in a crash at the Giro d’Italia. He’s back on the bike now, but might not contend in the Tour. American Dave Zabriskie is one of their top riders, as are Bradley Wiggins and sprinter Tyler Farrar. 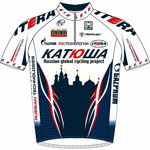 Team Katusha — Russia — Formerly Tinkhoff Credit Systems. Organized by the Russian Global Cycling Project foundation, which itself is funded by Russian businesses such as Gazprom, Itera and Rostechnologii. The team spent a bundle of money to attract top international stars like Italian Filippo Pozzato, and Russian Vladimir Karpets. Riders who fail doping tests must pay five times their salary back to the team. Belgian star Gert Steegmans refused to sign the agreement, and was left off the Tour de France team.

Lampre-NGC — Italy — Lampre has been an active supporter of cycling since 1991. They are a manufacturer of prefinished steel sheet materials. NGC is a manufacturer and distributor of medical devices. Last year’s secondary sponsor, Fondital, is out. Most of the team are Italians, with Damiano Cunego and Alessandro Ballan the team’s top riders. 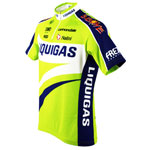 Liquigas — Italy — As its name implies, Liquigas is a provider of liquified gas products in Italy. The team’s lime green jerseys stand out in the peloton. Liquigas is a strong team, featuring Ivan Basso, who is back in pro cycling after a two year doping suspension; Daniele Bennati, who will be Mark Cavendish’s main sprint competition; Roman Kreuziger won the Tour de Suisse in 2008 and is expected to be in the Tour’s top ten this year, along with Vincenzo Nibali. 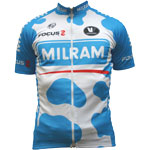 Team Milram — Germany — Milram is the European brand of the Bremen-based Nordmilch, Germany’s largest dairy company. Milk, butter, and cheese. Their 2009 jerseys emphasize the dairy connection, with a cow pattern that reminds me of the old Gateway computers motif. Milram is the only remaining German team in the tour, with the departure of Gerolsteiner, and this year, they’ll be riding a German bike: the Focus Izalco. Linus Gerdmann and Gerald Ciolek lead the team.

Quick Step — Belgium — Quick Step is a Belgian laminate floor covering company. Secondary sponsor Innergetic is Europe’s leading manufacturer of latex foam mattresses, toppers and pillows for the bedding industry. Their top rider is Belgian star Tom Boonen. It looked like he would be kept out of the Tour for the second year in a row, after admitting to recreational cocaine use, but on Friday, July 3, his appeal was upheld, and he will ride.  Two-time Tour of Flanders winner Stijn Devolder is another top Quick Step rider, and watch French star Sylvain Chavanel, who joined the team this year.

Rabobank — The Netherlands — Rabobank is a Dutch cooperative bank, mostly in agribusiness. They’re set up as a federation of credit unions. Their top man is Russian Denis Menchov, who won the Giro d’Italia this year. Menchov’s goal is to podium in the Tour. Other strong riders include Oscar Freire, who won the points jersey in the 2008 Tour, and Juan Antonio Flecha. In an effort to be transparent regarding drug tests, Rabobank is posting on its team web site a regularly updated list of all the doping checks made of team members. 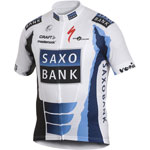 Saxo Bank — Denmark — Saxo Bank is an online investment bank. It took over sole sponsorship this year of the former CSC team. They’ve got a strong roster, including the Schleck brothers, Andy and Frank, both of whom could be contenders for the overall win; time trial specialist Fabian Cancellara; and probable stage win contender Jens Voigt. Missing is last year’s winner, Carlos Sastre, who jumped to Cervelo. Saxo Bank will ride Specialized bikes this year. 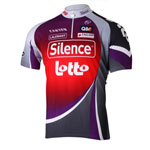 Silence-Lotto — Belgium — Lotto is the Belgian lottery. Silence is a brand name used by Omega Pharma, a Belgian pharmaceutical company. Previous team names of Davitamon and Predictor were also brand names of Omega Pharma. The team’s big gun is Australian Cadel Evans, who has finished second in the Tour each of the last two years. He’s expected to get more support from the team this year. Philippe Gilbert won the Ster Elektrotoer, a five-day stage race in Holland last month.