The new Bontrager Inform saddle has been getting a lot of attention in the cycling press lately.  Guest poster Jeff Hemmel has been riding one  for awhile now, and provides this look.

I’m somewhat obsessive about fit and comfort, so it was no surprise that I was ready to ditch the stock Bontrager saddle that came with my Trek 2.1. I briefly tried the comfy Terry Liberator from my hybrid, but quickly found it too big and cushy for my road bike. One of the Specialized Body Geometry models followed, before I settled on the Bontrager inForm RL that has topped my seat post for the last four months, or about 2000 miles.

There’s a lot of research behind the design of the inForm saddle, far too much to go into here. I’d encourage anyone interested to check out the data at bontrager.com/features/saddles. The basic conclusion, however, is that most riders don’t actually sit on their so-called “sit bones,” but instead their pubic arch. The more evenly you support that pubic arch, the less chance of compressing the pudendal nerve and artery, and the greater chance you prevent numbness and pain.

Some saddles try to address the latter problem with cutouts, but according to Bontrager, that simply focuses pressure on specific areas, and may actually increase symptoms, rather than alleviate them. Bontrager uses two different densities of foam in the inForm saddle to increase comfort, a stiffer foam in areas that support the skeletal structure, and a softer foam in areas that come into contact with soft tissues. With this method, and each size of saddle’s unique curvature, the company claims to support the skeletal structure properly, distributing the pressure evenly over soft tissue areas, rather than concentrating it in specific spots.

Getting sized for the proper saddle requires a visit to a bike shop that carries the inForm line. As Bontrager reps explain, getting fit is essential, as saddles are sized according to pelvic structure, not the size of your derriere. Evidently, some big arse guys have small pelvises…and vice versa.

At the shop, I sat down on the “saddle sizer,” a simple bench with a gel-filled top pad that records pressure-point impressions. Once I sat for a few seconds I hopped off and the salesman adjusted a built-in slider on the pad until corresponding colors lined up under the two impressions left by my buttisimo. I measured out to be a medium in the inForm line (saddles come in 128, 143, and 150mm widths), which is a notch up from what I measured in the Specialized line. I have heard this comment from others, however, so it may be a common trait. I’m only about 5’ 8”, 155 pounds, but evidently I’ve got a medium-sized pelvis…at least in Bontrager’s opinion.

Once my color (size) was known, I just went to the wall and picked out a saddle with the matching color label. I put the saddle on my bike, adjusted several times to get everything level, and hit the road. 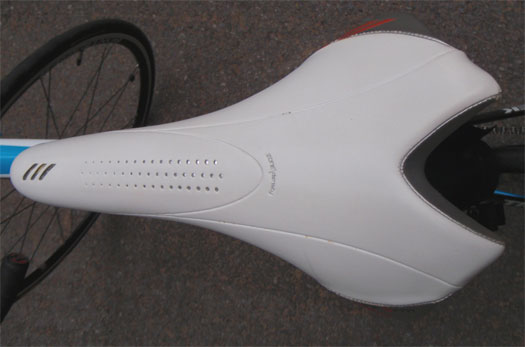 Saddles are one of those personal preference things, but I quickly discovered I liked the more rounded curves of the inForm. Previously I had been trying a Specialized Avatar Gel, which I found too flat for my taste. The Specialized’s cutout seemed to keep away any numbness, but I developed some weird back pain. That went away with the inForm RL. There is a short break-in period, but after that, I found the saddle relatively comfortable.

No, it wasn’t the Holy Grail; I still long for that perfect saddle that will “disappear” beneath me on long rides like some riders promise. But overall, the shape seemed to work for me. The top cover was also slippery enough to allow me to slide back when I wanted, or scoot forward, without undue effort.

One quirk? The saddle’s plastic base has two pronounced ridges under the nose. I found my cycling shorts occasionally brushed against them as I rode, never enough to snag the fabric or cause a tear, but enough to be noticeable. With time I’ve gotten used to it, and haven’t found it to be a problem.

End of story? Not quite. While I can’t say I ever loved the inForm, I liked it enough to stick with it. About two months ago, however, I suddenly began to develop the very numbness that Bontrager claimed to prevent. For a guy who never really had any problem with numbness in the past, it was a little disconcerting to reach down there to make an adjustment and, well, touch something before the body part in question noticed it was being touched.

The sudden change makes no sense to me. My body position hasn’t changed. Most of my rides the past few months, however, have been quite windy. Perhaps my position changes fighting the wind, and I’m placing pressure on different areas of the saddle. I asked Bontrager reps about the problem, and they seem as puzzled as I am. I guess I’ll continue to experiment slightly with positioning to see if I can solve the problem. I recently had a bike fitting, and the fitter changed the position of my saddle. But while I didn’t notice any numbness during the fitting, it returned again once I hit the road. I’m living with the problem currently – I periodically get up out of the seat to restore some blood flow — but I don’t like it.

That makes it hard to draw a definitive conclusion. My initial reaction was quite favorable. I liked the saddle’s support, it didn’t cause numbness, end of story. Recent problems, however, have me questioning how long the saddle will last. Still, I’d suggest trying one out. Bontrager offers a generous 90-day unconditional comfort guarantee, so you can try it for several months and return it if you don’t like the ride.

Now if you’ll excuse me, I need to find some of that chamois cream with the cooling sensation. I’m hoping a little party in my pants will keep my privates awake until I can figure out what went wrong.